The world’s oceans in 2017 were the hottest on record ‘by far’, a new study has found.

The research shows that Earth’s oceans have gradually become hotter over the past 60 years as a result of man-made global warming, scientists said.


The annual electricity generation level for the entirety of China was 699 times smaller than the heat increase in Earth’s oceans over the past year. 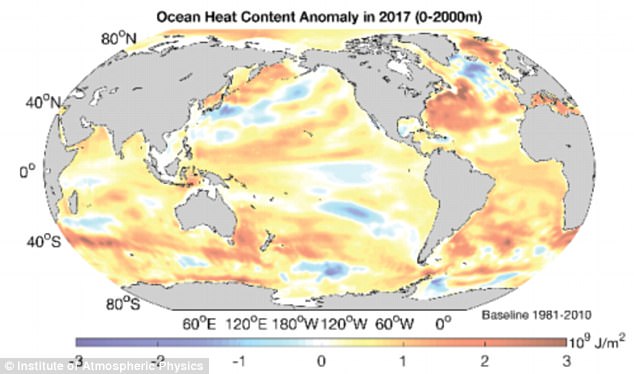 The world’s oceans in 2017 (heat map pictured) were the hottest on record ‘by far’ as a result of increased greenhouse gases, a new study has found

Effects of the warming seen today include coral bleaching and melting sea ice, the scientists warned.

The research involved an updated analysis of the of the top 6,000 feet (1.800m) of the world’s seas undertaken by experts at Beijing-based institutions the Institute of Atmospheric Physics (IAP) and the Chinese Academy of Science (CAS).

‘The long-term warming trend driven by human activities continued unabated,’ the researchers, led by the IAP’s Dr Lijing Cheng, wrote in their paper.

‘The high ocean temperatures in recent years have occurred as greenhouse gas levels in the atmosphere have also risen.’

While the study found that the world’s ocean temperatures have risen as a whole since the 1950s, the Atlantic and Antarctic Oceans experienced the most warming.

Researchers looked at sea temperature data collected by a number of research institutions since the 1950s.

They discovered that during the 1990s, the heating effect of global warming began to accelerate.

Ocean temperatures in 2017 beat those of the previous hottest year on record, 2015.

And the monthly global land and ocean temperatures at the start of 2017 were very warm, wit the first four months each ranking as the second warmest ever for their respective months. 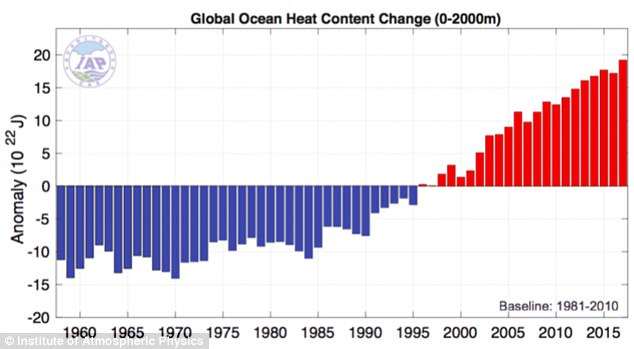 Pictured is a graph showing change in global upper-level (0–2000 m) ocean heat content since 1958. Each bar shows the annual mean relative to a 1981–2010 baseline. The final bar on the right shows the 2017 value. Reliable ocean temperature records date back to 1958

The global land and ocean temperature for the month of March 2017 was 1.03°C (1.9°F) above the 20th century average – the first time the monthly temperature departure from average surpasses 1.0°C (1.8°F).

The yearly global land and ocean temperature has increased at an average rate of 0.07°C (0.13°F) per decade since 1880, however the average rate of increase has been twice as great since 1980.

The researchers said that man-made global warming triggered by greenhouse gases is responsible for our heating waters.

Gases like carbon dioxide and methane trap heat from the sun closer to Earth’s surface, heating up our atmosphere and oceans.

Owing to its ‘large heat capacity, the ocean accumulates the warming derived from human activities; indeed, more than 90 percent of Earth’s residual heat related to global warming is absorbed by the ocean,’ according to the researchers.

‘As such, the global ocean heat content record robustly represents the signature of global warming.’

The consequences of this warming include coral bleaching, which occurs when corals stressed by heat or pollution expel the symbiotic algae they need to survive.

Experts said that Earth’s melting sea ice – whose coverage and thickness has rapidly decreased since global records began in 1979 – is also the result of our planet’s warming oceans.

What can you use instead of Google and Facebook?

Lab-bred mosquitoes set to be released in South Miami