The bird’s rapid jabbing causes them to suffer 14 times the force that leads to concussion in humans.

The Downy Woodpecker (pictured) has a tongue that goes around the inside of its skull to protect it. Researchers found that persistent tree pecking does cause brain damage, but this does not seem to affect the birds

Researchers at the Boston University school of medicine studied pickled woodpecker brains to see how pecking affects the woodpecker’s head.

They found that over time, woodpeckers build up a large amount of a protein called tau, which is associated with brain damage in humans.

Large amounts of the protein is also associated with Alzheimer’s disease and other forms of dementia, but despite having high levels of this protein, the birds appear to suffer no adverse effects.

The findings from the team could help humans with understanding neurodegenerative diseases and how to treat them.

Woodpeckers are protected from severe head trauma because they shield their brains with their tongue, which wraps around the inside of their skull.

A number of previous studies have looked at how this mechanism protects the brain from injuries, but the new study is the first to look at whether or not the brain appears damaged, the researchers said. 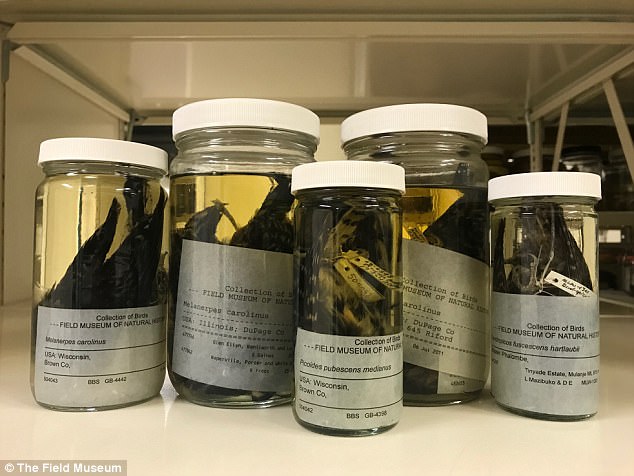 Study coauthor Dr Peter Cummings said: ‘There have been all kinds of safety and technological advances in sports equipment based on the anatomic adaptations and biophysics of the woodpecker assuming they don’t get brain injury from pecking.

‘The weird thing is, nobody’s ever looked at a woodpecker brain to see if there is any damage.’

The study used pickled bird brains from the collections of the Field Museum and the Harvard Museum of Natural History to examine them for accumulation of tau.

George Farah, lead author of the study explained: ‘The basic cells of the brain are neurons, which are the cell bodies, and axons, which are like telephone lines that communicate between the neurons. 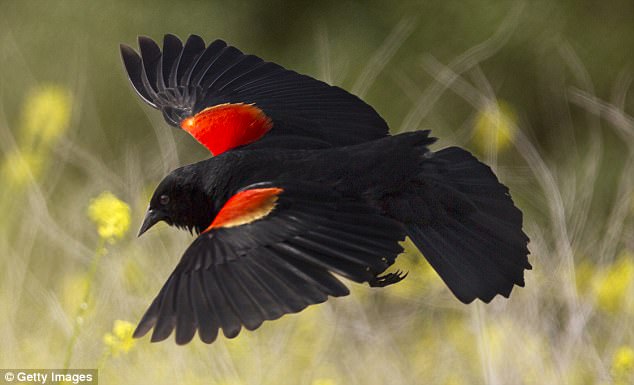 Researchers compared the brains of Downy Woodpeckers with the brains of Red-Winged Blackbirds (pictured). The blackbirds are not prone to head injuries and were used as a control in the experiment

‘The tau protein wraps around the telephone lines – it gives them protection and stability while still letting them remain flexible.’

In moderation, tau proteins can be helpful in stabilising brain cells, but too much tau build-up can disrupt communication from one neuron to another.

Professor Cummings added: ‘When the brain is damaged, tau collects and disrupts nerve function – cognitive, emotional, and motor function can be compromised.’

The researchers took thin slices of the preserved brains of Downy Woodpeckers and Red-winged Blackbirds who do not suffer brain injuries from pecking as a control.

The slices of brain tissue were then stained with silver ions to highlight the tau proteins present. 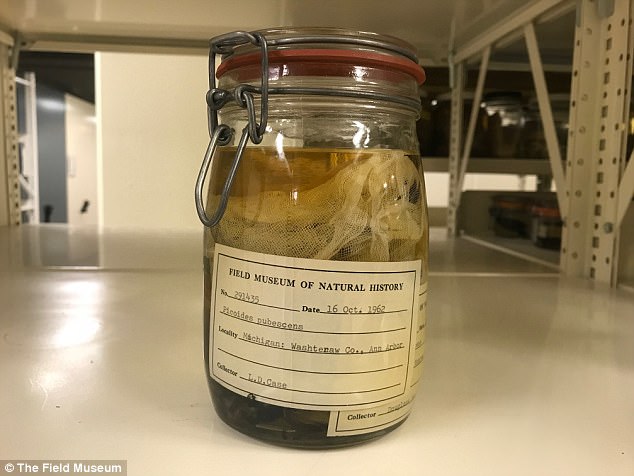 The field museum donated woodpecker specimens (pictured) to the researchers for their analysis. They found that the brains of woodpeckers had far higher levels of tau, a protein that is associated with brain damage

They found the woodpeckers’ brains had far more tau protein accumulation than the blackbirds’ brains.

However, while excessive tau buildup can be a sign of brain damage in humans, the researchers noted this might not be the case for woodpeckers.

Mr Farah said: ‘We can’t say that these woodpeckers definitely sustained brain injuries, but there is extra tau present in the woodpecker brains, which previous research has discovered is indicative of brain injury.

Professor Cummings added: ‘The earliest woodpeckers date back 25 million years – these birds have been around for a long time.

‘If pecking was going to cause brain injury, why would you still see this behaviour? Why would evolutionary adaptations stop at the brain?

HOW DO WOODPECKERS PROTECT THEIR BRAINS?

The woodpecker is an example of how evolution has protected the brains of some animals from repetitive head injuries.

The woodpecker’s tongue extends through the back of the mouth out of the nostril, encircling the entire cranium. It is the anatomical equivalent of a safety belt for its brain.

By circling the brain, the tongue of the woodpecker provides protection and cushions the impact against the surrounding skull. 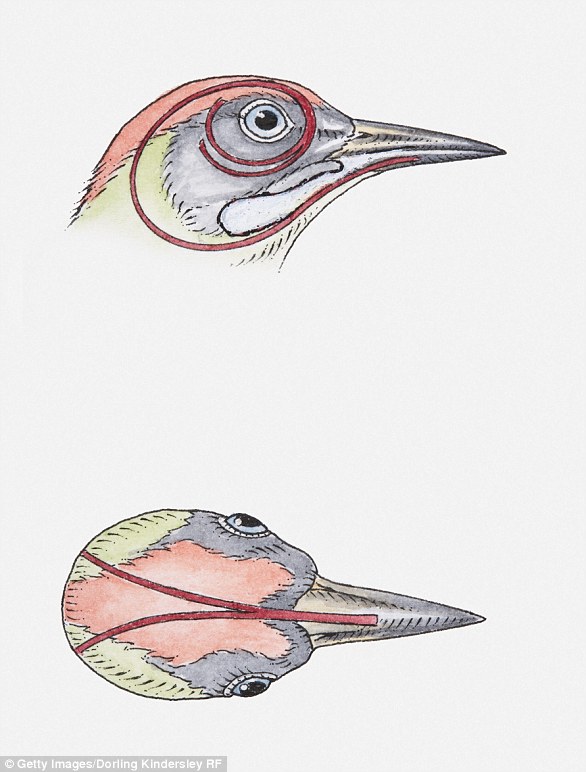 The tongue of a woodpecker acts as a seat-belt for its brain, protecting the delicate organ from violent collisions with the surrounding cranium. Woodpeckers have evolved this technique but several other animals have not  – including humans

In recent years, helmets have centred around this adaptation.

New research from Boston University has found that the brains of woodpeckers show increased amount of tau, a protein which is often found in humans with neurodegenerative illnesses.

Despite this link with increased tau, scientists saw that the woodpeckers have no negative symptoms.

Researchers think that the woodpecker brain could help in treating illnesses such as Alzheimer’s and Parkinson’s.

‘There’s possibility that the tau in woodpeckers is a protective adaptation and maybe not pathological at all.’

They added the knowledge about woodpecker brains could help make American football or rugby equipment safer for kids.

Professor Cummings said: ‘If the tau accumulation is a protective adaptation, is there something we can pick out to help humans with neurodegenerative diseases?

‘The door’s wide open to find out what’s going on and how we can apply this to humans.’

The study was published in the journal PLOS ONE.