The iconic rockstar was found dead on the bathroom of his Graceland mansion on August 16 1977, after what is believed to be a fatal heart attack brought on by the King’s infamous codeine addiction.

But following an autopsy, medical examiner Doctor Jerry Francisco listed Elvis’ cause of death as an irregular heartbeat – a condition which can only be diagnosed while a person is still alive.


Inconsistencies following the star’s death, as well as numerous sighting of the slicked-back movie-star in the decades following his passing, have led theorists to believe Elvis faked his own death in order to escape the limelight.

And an error on his gravestone has been seen by many of his adoring fans as a message that he is, in fact, still alive.

The star’s headstone to the grave in Memphis, Tennessee reads as follows: “Elvis Aaron Presley […] He was a precious gift from God we cherished and loved dearly.”

But, shockingly, the King’s name is spelt wrong.

On his birth certificate, Elvis’ middle name is spelt “Aron” and many believe that may have been to make it similar to his stillborn identical twin, Jesse Garon Presley.

The glaring error has been seen by some as a hint that the King’s highly publicised death was staged.

Among them is author and Elvis conspiracy theorist Gail Brewer-Giorgio.

“Why would a man deliberately misspell the most famous name in the world?” she asked.

A YouTube video showing the supposed error also sparked a frenzy online, with one person writing: “Elvis is indeed alive.”

Another viewer continued: “As long as Elvis Presley’s music is alive, he lives on.” 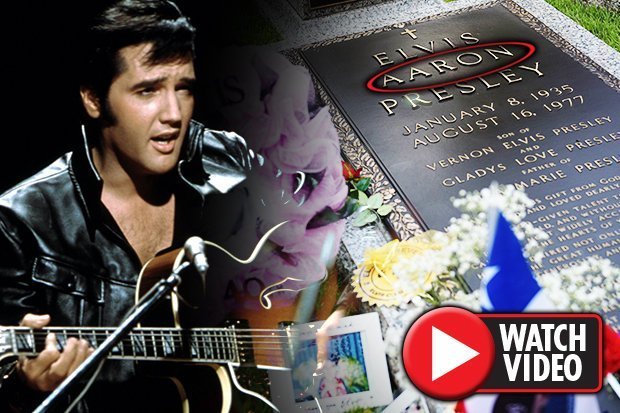 ELVIS HAS LEFT THE BUILDING: Fans believe he faked his own death in 1977 (Pic: Getty)

Others called for officials to “dig him up” in order to end the controversy once and for all.

But notions the singer’s name was misspelt were dismissed by his cousin Billy Smith, in book Elvis and The Memphis Mafia.

He claims the King told his father: “I want my name written with two A’s, especially on legal documents.”

In the years following Elvis Presley’s death, fans and souvenir seekers often tampered with the star’s grave, leading the star’s mother to move her son’s body to his Graceland mansion, which is visited more 60,000 people every year.

It comes after fans claimed to have spotted Elvis Presley in Graceland on what would have been his 83rd birthday, last year.

Boy, 12, Survives Avalanche That Buried Him For 40 Minutes