By Tom Farmery For Mailonline

Some decisions that go to VAR (video assistant referee) will be shown on giant screens in Premier League grounds from next season.

The Premier League will become the first competition to allow supporters to see footage of a ‘definitive video clip’ that led to a decision being made.

In a move explained to clubs on Wednesday, the Premier League ‘has created graphics which will be displayed on giant screens to explain any VAR-related delay to a match, and any over-turned decision to fans, it will be broadcast on giant screens’.

In the case of footage being used to come to a decision, supporters would also be able to see the key evidence on the big screens.

For grounds without the technology or screens big enough to display the correct images, a club’s PA system will be used to relay the decision.

The Premier League are also considering whether in time fans would be able to use their phones to access footage and receive messages.

A statement added: ‘In addition, the Premier League is investigating the possibility of messages and video-clips being viewed on handheld devices via an app.’ 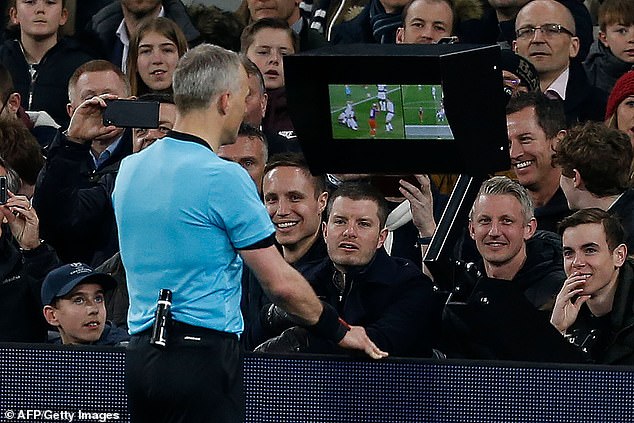