One of the men behind the machine has an amusing story to tell about a time when life made a little less sense to Brooks Koepka.

It was 2014 and the American had arrived at a pub in Ascot to have dinner with Pete Cowen, a Yorkshireman in his sixties with a fine reputation for coaching elite golfers and an equally distinguished record of blunt talking.


Earlier that day they had been to Wentworth together with Koepka’s caddie, Ricky Elliott, to see if Cowen might be the right guy to improve the short game of a player ranked outside the world’s top 40. After Cowen had won a challenge by holing a pair of bunker shots, it was time to eat.

Brooks Koepka wins majors for fun, and will prove you wrong if you say he can’t do something 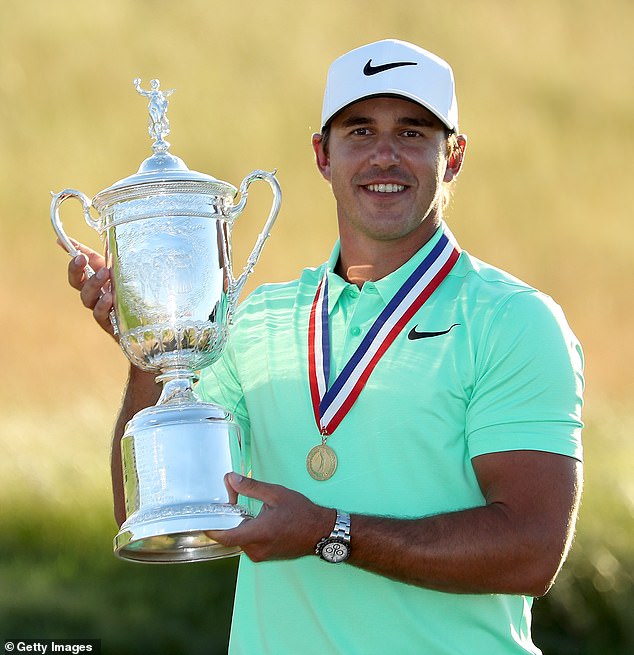 He’s a hot tip to win The Open, which starts on Friday at Royal Portrush in Northern Ireland

Cowen picks up the tale. ‘This pub was very nice,’ he tells Sportsmail. ‘Lovely place. Anyway, I’ve gone in first, got us a table and I’m waiting for Brooks. In he walks, hat on backwards, and goes off to the toilet.

‘When he comes back I say, “See that attractive barmaid over there? She was asking about you”. Brooks now has this little smile. “Oh yeah?” he goes, so I told him: “Yeah, she said you look like a tw*t in that hat”. 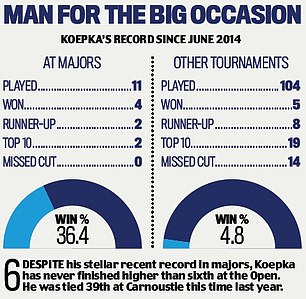 ‘Funny thing is, not many people know this but now we have a WhatsApp group — me, Brooks and Ricky. It is called TWTH, for Tw*t With The Hat.’

Five years on, with Brooks Koepka back in Britain in pursuit of a fifth major title in 10 starts, arguably the most deadly big-game hunter since Tiger Woods can probably get away with wearing his hat any way he likes.

The rise of Koepka has been remarkable. As has been the public indifference in response, if you take his word for it. Maybe he is right about that — perhaps he isn’t getting the full credit he deserves. But maybe he doesn’t even want it. Maybe, and quite possibly, he is exactly where he wants to be — the best golfer in the world by a street but with just enough of a sense of injustice to fuel his drive to stay there.

Indeed, if anyone has mastered the old art of taking a snub — real or imagined — and turning it into gold, then it is the big man from Florida with a huge game. It is a recurring theme in the narrative of how he became the best golfer in the world. 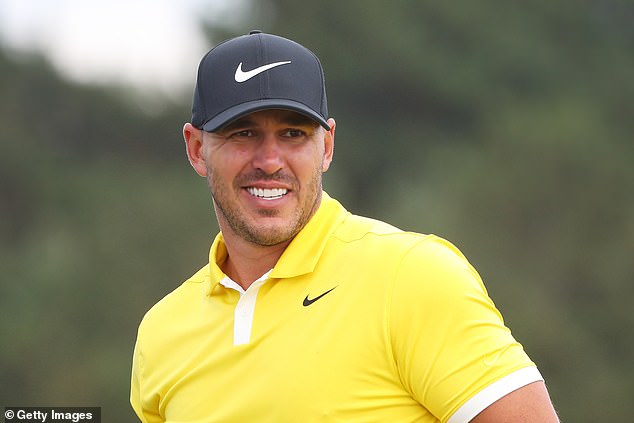 As the 29-year-old prepares to take on the Open at Portrush this week, members of his inner circle have shared elements of that story with Sportsmail — from the bloodline to the armed bandits to the bollocking to the bet. They offer an insight into a fascinating character too often mistaken for bland.

‘Believe me,’ says Cowen, ‘anyone who thinks this guy is dull has got it wrong. Very wrong. That game face he shows hides a lot’.

Koepka’s tale starts with genetics and a car crash. His great uncle, as is well known, was Dick Groat, who played basketball in the NBA in the Fifties and then twice won baseball’s World Series in the Sixties. If Koepka had his time again, he has said he would rather swing a bat than a club.

But golf was always the more natural destination at home in Florida with his sport-obsessed father, Bob Koepka, who had worked odd jobs at the course in Pennsylvania that Groat bought.

Koepka Sr reached scratch without a lesson and by the age of two, Brooks, his eldest of two sons, was holding plastic clubs. He was decent, but golf did not become Koepka’s sole focus until he was 10, when his babysitter’s car was hit at an intersection and he fractured his nose. That ruled out contact sports for the summer and thereafter his days were spent almost exclusively at West Palm Beach’s Okeeheelee Golf Course. 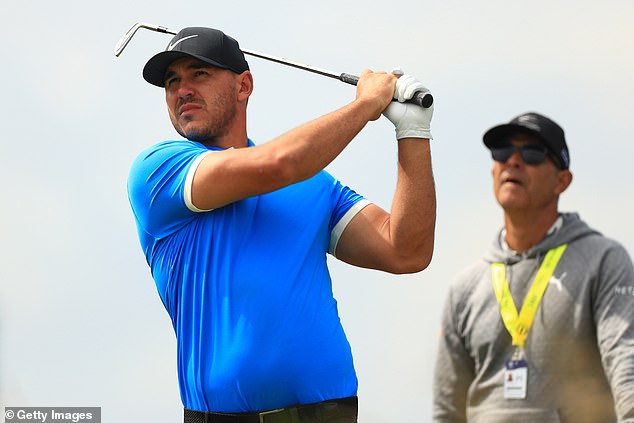 By the age of 11, he was on his high school team and by 13 he had ended his father’s five-year winning streak at the Sherbrooke club championship. He beat Bob in the final. Where it became especially interesting, in light of what has followed, was around the time of going to college.

He wanted to go to the University of Florida but their coach Buddy Alexander never tried to recruit him, so he ended up at Florida State. Bob Koepka tended to remind his son of the snub on his way to becoming a three-time all-American. A psychological pattern was set. ‘The thing about Brooks, if you tell him he can’t do something, you light a fire in that guy,’ Joey Diovisalvi tells Sportsmail.

Since 2016 Diovisalvi has been the physical trainer behind the golfer credited with being among the fittest and biggest hitting on tour. ‘You say he isn’t up to something, he will prove you wrong. Spectacularly.’

By the time Koepka turned professional in 2012, having never made the US Walker Cup team for its best amateurs, not many thought he was up to the challenge of ruling the golfing world.

Koepka started the adventure in the most unlikely of places.

European golf’s second tier, the Challenge Tour, isn’t the typical launching point for American pros, but Koepka had failed to progress through qualifying schools for the PGA Tour and European Tour. 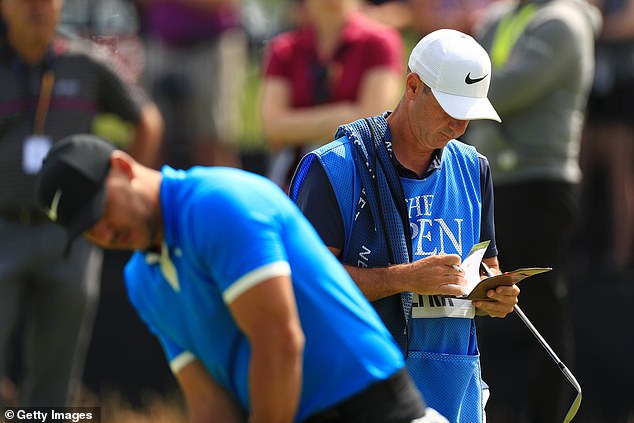 Ricky Elliott (right), Koepka’s caddie, checks the scorecard during a practice round on Tuesday

He bounced between outposts from Kazakhstan to Portugal to Finland in shared hire cars, winning four times in a two-year span that he has described as the happiest time in his career.

‘He was a massive hitter even then,’ says George Murray, a 10-year veteran of the European Tour. ‘He would be hitting six irons into par 5s and you’re thinking, “OK then”.

‘There would be tournaments where he’d be winning by 10 shots. I’m not saying you could see straight off that he’d be world No 1 but you could tell he was going to a different level.’

Murray was in a taxi in Kenya with Koepka during the most surreal episode of either man’s career, when they were stopped at a petrol station by three armed men in the middle of the night. Koepka has previously said he thought they were going to die and had turned his phone’s locator on in panic before they were able to drive off.

‘It’s not something I like talking about,’ says Murray. ‘I’d been on a flight from South Africa and we were in the taxi ages. I think we were taken to the wrong hotel and then on the way we got held up by these guys, like Brooks said.’

Murray, a fishmonger since his retirement in 2016, adds: ‘I think anyone would say Brooks has really gone on to do quite well for himself since.’

Pete Cowen believes a decisive moment came with one hard conversation before Koepka’s breakthrough at the 2017 US Open at Erin Hills. 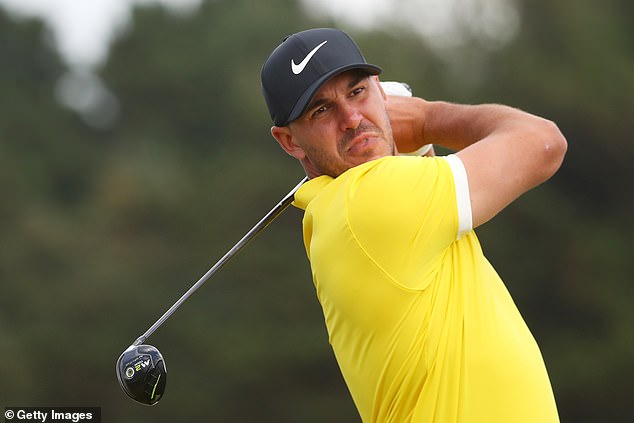 His game has always had strong components — he hits it a mile and his short game holds up under pressure — but mentally, Koepka, who is now occasionally derided for his flat disposition, used to slip into destructive funks on the course. ‘Everyone thinks he has been laidback his whole life — no chance,’ says Cowen. ‘He was a right moaner before.

‘I gave him the bollocking of his life before he won the US Open. He was whingeing constantly in Memphis in the week before, “Oh poor me, why do I keep coming second?”

‘I told him, “You need to have a champion’s attitude, you need to enjoy a bit of adversity, see it as a challenge”. It sort of shocked him, being spoken to like that. But the penny dropped. He signed a flag after winning the US Open and gave it to me. It says, “Thanks for the bollocking!”’

Cowen, who has coached Rory McIlroy, Sergio Garcia and Henrik Stenson among others, adds: ‘Funny thing about Brooks, you challenge him, he responds.

‘Now he is the calmest guy in a major and that is a massive thing. He has a setback, he forgets it. What used to be his weakness is now a strength.’

Diovisalvi, Koepka’s physical trainer, has been manipulating the American’s competitive streak since 2016, when he was first starting to crack into the top 20.

‘When he first came to me, it was straight off, “How can you help me take the next step?” He wanted to be the best and works accordingly.

‘It helps that he is a great athlete — you watch him get on the bike or go running and he has the form of a cyclist or a runner.

‘I would say he is changing the way a pro golfer looks. But his gift is intensity and hard work.’

His training partner and great friend is Dustin Johnson, the world No 2. ‘You can imagine how we play them off against each other,’ Diovisalvi says. ‘They go at it trying to out-do the other. 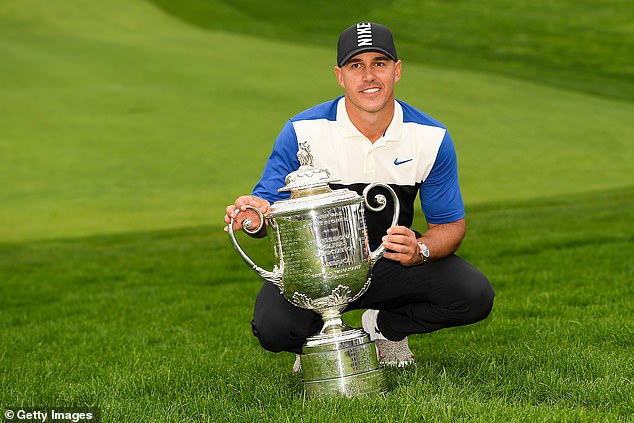 ‘With Brooks you have to understand his intensity. He will go seven days straight on workouts, have a Monday off sometimes, and start another seven. He lives for it. I am not sure people outside see the passion we see with this guy.’

Diovisalvi has a story from the Sunday morning ahead of Koepka’s final round at the 2017 US Open.

‘We were in the gym and then he has this crazy idea,’ Diovisalvi says. ‘He decides a few hours before he is on the tee that he is going to set his own record at 225 pounds and 15 reps on the bench press. I was like, “Brooks, what?” And he goes, “I know my limits, bro”. Well, if he’s going to be like that…

‘Suddenly we all start taking bets and he gets down to it. At this point you should know a funny thing about Brooks — you have this big mammoth of a man but when his body is breaking down, he makes this high-pitch squeal. Every time. So he is squealing away and gets to 15. Incredible sight.

‘He won that bet and then won the US Open. You tell that guy he can’t do something and watch him do it.’

It is the common strand of his story, from college to world-beater. Whether he has had sufficient recognition for that domination of his sport is open to debate.

But it seems reasonable to assume that those thoughts and irritations have been key factors in the storm that has hit golf in the past two years.

This week it blows into Northern Ireland and the Open Championship, where Koepka has never finished in the top five.

You’d wager that his team have mentioned that once or twice.

Public Health England director: 'Coronavirus likely to already be in the...