A mother has released shocking pictures of the scars and injuries she claims her anorexic daughter has sustained because of a catalogue of failures at a mental health unit.

Kelly Wilthew alleges staff have allowed 17-year-old Faith to repeatedly bang her head against a wall for hours on end in a non-padded room.


She also claims they have failed to prevent her accessing razor blades – allowing her to ‘rip herself to shreds’.

The 36-year-old said Newberry Centre, an inpatient service at West Lane Hospital in Middlesborough, even charged the teenager £14 for a TV cord after she used it to try to kill herself.

The vulnerable youngster was placed on 24-hour observation after her suicide attempt, but her mother argues this was only for a month. She was then left alone at night for the next 10 weeks despite her ‘daily’ attempts to take her own life.

Mrs Wilthew claims Faith managed to get hold of a razor blade when she was previously at the Evergreen Centre – which is next door to the Newberry Centre – and is run by the same trust.

Both centres have a non-blade, sharp-free policy. Faith was rushed to hospital after the bleeding from her leg could not be stemmed.

The teenager has been sectioned for the last four years and is force-fed through a tube up to four times a day and even refuses water.

Mrs Wilthew said she is not receiving any medication or therapy and is now campaigning for her to be transferred to a more appropriate unit ‘before it’s too late’.

Approximately 1.25 million people in the UK have an eating disorder, according to the charity Beat. Research suggests the number of patients in England being sectioned in recent years has risen at an ‘alarming rate’. 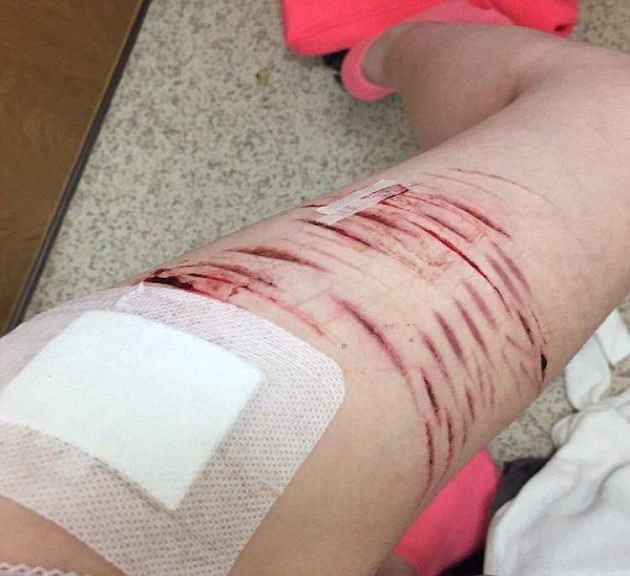 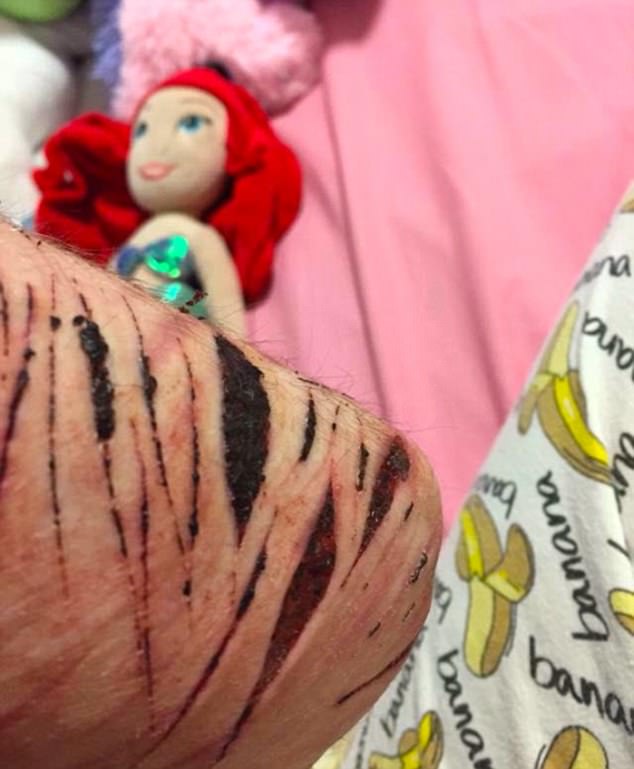 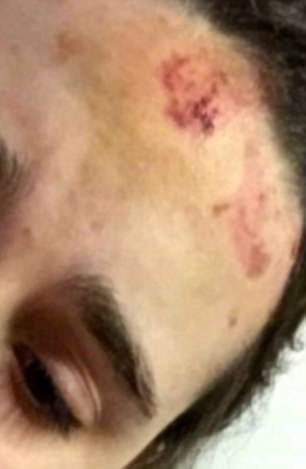 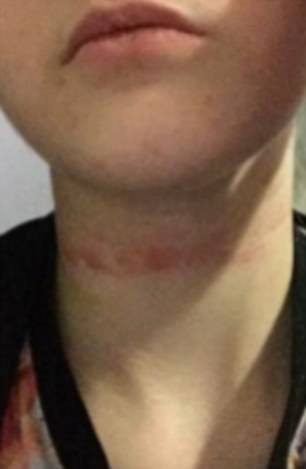 The mother-of-four claims staff will not pad her room to prevent damage when she bangs her head and for months would not restrain her. Faith has also found material to use as a ligature around her neck

‘I have begged for better care and support for her. When are they going to do something?  When it’s too late and she’s dead?’

‘It’s horrendous to watch your child go through this. I can’t put into words the fear I feel inside.

‘I can’t sleep, I’m on anti-depressants and I wake up in a panic that something’s happened to her every day. It’s extremely distressing for her three younger sisters too.’

A spokesperson for Tees, Esk and Wear Valleys NHS Foundation Trust, which runs Newberry Centre and Evergreen Centre, said it would be inappropriate to comment on individual cases but said it takes the safety of patients very seriously.

‘Faith was 13 when her eating disorder began’

Mrs Wilthew, from Ushaw Moor in County Durham, describes Faith as a ‘clever kid’ who was excelling academically, having won a scholarship with a top girls’ school and also did well at gymnastics, singing and performing.

Her daughter was 13 years old when she began showing signs of having an eating disorder. 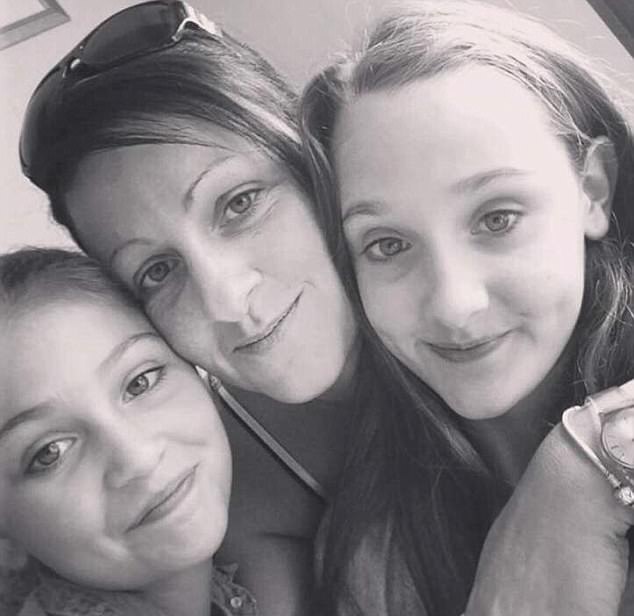 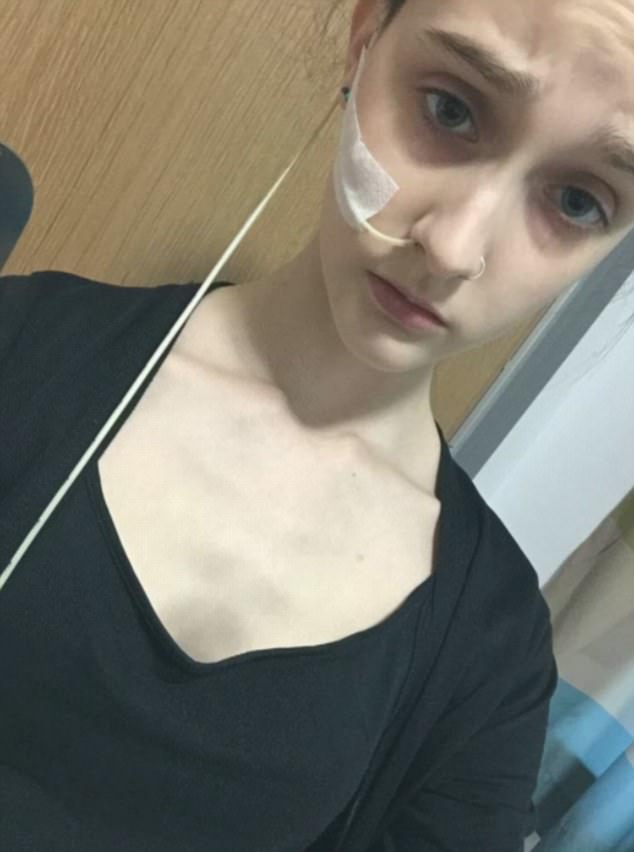 Faith was just 13 when she began suffering with anorexia.

After months of trips to her GP, blood tests and stays in hospital, medics suspected her lack of appetite and rapid weight loss was psychological.

She was referred to CAMHS – the NHS services that assesses and treat young people with emotional, behavioural or mental health difficulties – but Mrs Wilthew claims she was waiting weeks for an appointment while her daughter ‘wasted away’.

The youngster had plummeted to just 5 stone 3lb and after her mother and father Erick begged social services to intervene, she was hospitalised once again in March 2014 and placed in a unit to treat eating disorders in Edinburgh in the June.

‘It took nearly 18 months for Faith to get a bed in a unit for eating disorders,’ said Mrs Wilthew.

‘Then she was placed hundreds of miles away in Edinburgh.

‘We went to see her often several times a week, but it was was a good four-hour drive so not an ideal situation with three other children.

‘We had to fight at a tribunal to get Faith a bed at a facility closer to home.

‘I feel Faith would not have been in this state if she’d had proper early intervention.’

In January 2015 Faith was moved to The Evergreen Centre – which is nearer to the family – where she was deemed ‘treatment resistant’.

In March 2016 she was transferred to the Newberry Centre next door.

‘I noticed she would only eat a bit, and then she would just play with her food,’ explained Mrs Wilthew.

‘Then she became withdrawn and spent a lot of time in her room instead of socialising with her family like she normally would.’

‘She’s even got the blade out of a pencil sharpener’

Following her diagnosis of anorexia nervosa, Mrs Wilthew says she has faced an uphill battle to get proper support – waiting 18 months for a bed in an eating disorder unit. When she did get a place, it was in Edinburgh, hundreds of miles away from the family home.

Then in January 2015, Faith was moved closer to The Evergreen Centre and in February the next year she was taken to A&E after she had managed to cut herself behind her knee.

‘Staff found her in her room and couldn’t stop the bleeding and she had to be rushed to hospital where the vein had to be cauterised,’ explained Mrs Wilthew.

In March 2016 she was transferred to the Newberry Centre to see if they could help her.

It was here Mrs Wilthew says her daughter’s mental health took a major turn for the worse.

‘She started severely self-harming and what concerns me is how she again got hold of razor blades in a supposedly sharp-free unit.

‘She’s even got the blade out of a pencil sharpener and harmed herself.

‘She’s been found numerous times by staff with a ligature round her neck.

‘They just then leave whatever material she’s used such as a phone cord in her room and she does it again. 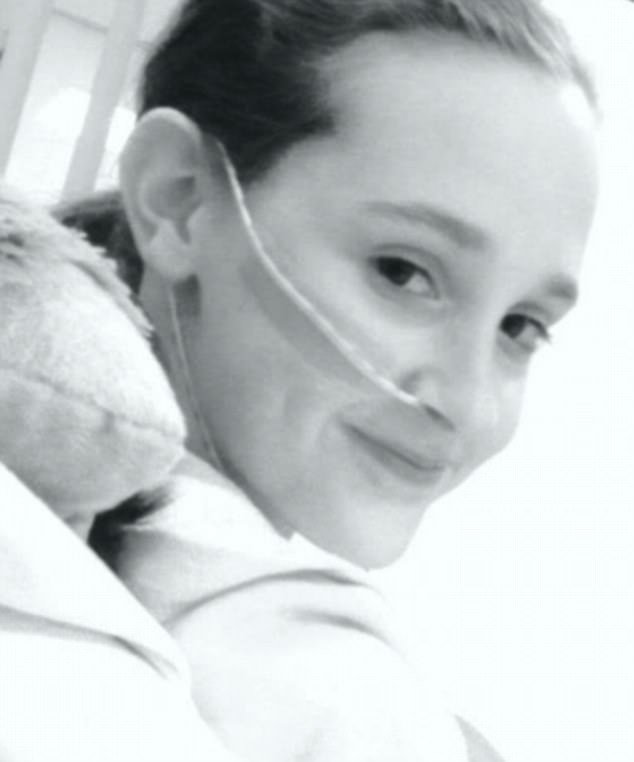 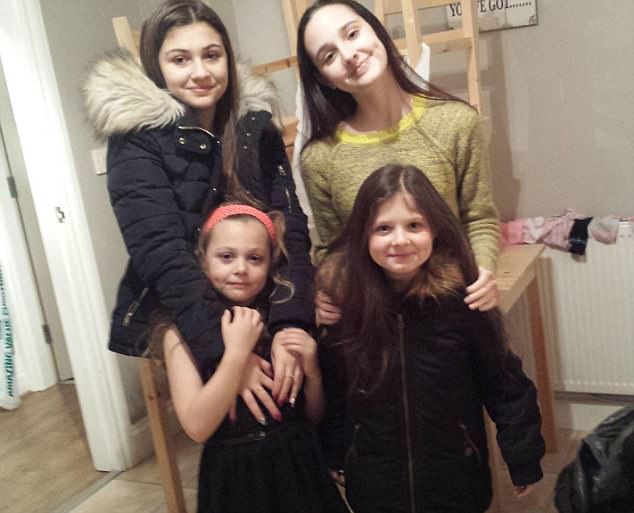 ‘She was left to bang her head against a hard wall over and over. Her care plan said staff should ask her to stop banging her head and for months they wouldn’t restrain her.

‘The plan says staff should refrain from communicating with her or offer her any warmth or empathy until she stops banging her head.

‘It’s like they’re punishing her for her illness. They treat her like she has a choice to behave like this but it’s something she’s not in control of.’

Mrs Wilthew also claims staff left her daughter overnight with a broken arm without pain medication before she took her herself to A&E the next day.

She says she had hurt herself falling over at the unit’s gym which she does not feel her daughter should have access to.

She’s ‘lost in the system’

Mrs Wilthew said Faith has been self-harming almost on a daily basis now for the past few months.

Yet she claims the first time she was given anti-depressants was in August last year – despite having been in institutions for four years – but they were soon stopped.

‘In my opinion they were working. The ward staff said they were too. But a consultant, against my wishes, decided to take her off them and she got worse.’

Mrs Wilthew says Faith has been sedated but this has now been removed from her care plan which she objects to as she feels this is necessary to keep her safe when she is distressed.

She said she had some cognitive behavioural therapy (CBT) and dialectical behaviour therapy (DBT) in the Edinburgh unit, but has had none since.

‘I feel that the staff just say “ok, she’s nor engaging” and don’t keep trying. Nothing is ever going to get better unless she gets this help.’ 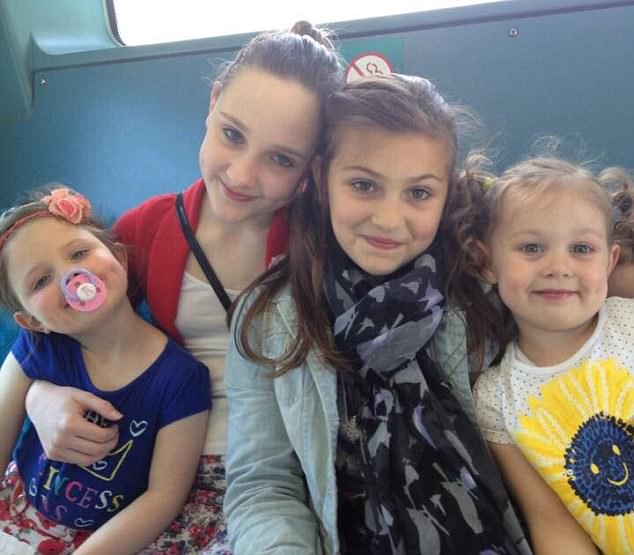 Faith has been diagnosed with emotionally unstable personality disorder, which her mother disagrees with

Mrs Wilthew explained that after ‘begging’ the staff for months, they have just a fortnight ago agreed to add in her care plan that she should now be restrained if she begins to bang her head. She is still pushing for staff to engage with her when she becomes distressed like this.

Faith has now gained weight from the feeding regime, but is still not a healthy weight according to Mrs Wilthew who claims staff are not monitoring this properly.

‘How can you expect a child to recover living like this?’

The teen has been diagnosed with emotionally unstable personality disorder, which her mother disagrees with.

Her mother said: ‘I considered if she had a personality disorder but I strongly feel she is being misdiagnosed.

‘In my opinion she has severe anorexia nervosa and her self-harming is a symptom of being lost in the system, institutionalised and not getting the right treatment for her eating disorder.

‘How can you expect a child to recover living like this? She is having no formal therapy or education? She’s just being left to deteriorate.

‘She will be 18 in August and have to leave Newberry anyway. We don’t know where she will go.’

Elizabeth Moody, director of nursing and governance at Tees, Esk and Wear Valleys NHS Foundation Trust said: ‘We take the safety of the people in our care very seriously and we have a duty of care to safeguard them and maintain their confidentiality. Therefore it wouldn’t be appropriate to comment on a particular patient’s case.

‘However, we’re aware the patient’s family are unhappy with the care and treatment we’re providing and have been meeting with them to try and resolve this.

‘We’re sorry to hear they still have concerns and we would ask them to please get back in touch with us if they wish to discuss anything further.’

You can follow the family’s campaign updates on a blog here.

The number of patients in England with eating disorders being sectioned has risen at an ‘alarming rate’ in recent years, research suggests.

A study found that 86 per cent of eating disorder units nationally have witnessed a rise in the number of patients treated under section from 2008 to 2015.

The number of sectioned patients on eating disorder units has risen by 222 per cent during this period.

The figures came from the University of East Anglia, which contacted 51 specialist NHS Mental Health Trusts in England about their eating disorder patient admissions. 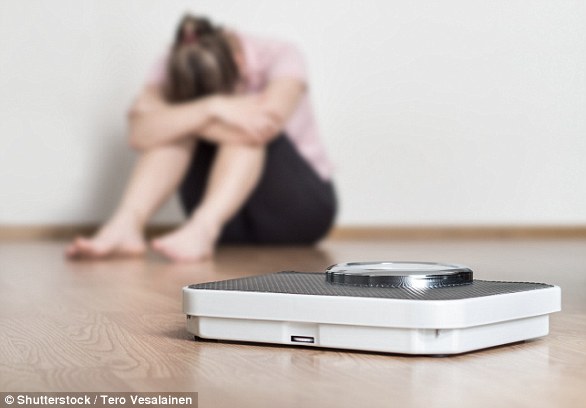 Beat’s chief operating officer Lorna Garner told The Huffington Post: ‘The evidence from this research should be ringing alarm bells – more people are getting to a point where their lives are considered at risk or that community care is ineffective.

‘Eating disorders are serious mental illnesses and those diagnosed need specialist treatment at the earliest possible opportunity and for the right length of time.’

Possible complications, according to NHS Choices, include:

Coronavirus: Airlift for Britons trapped in China ‘under review’

Vacations are good for Workers and Companies