Sixty minutes into proceedings at Vicarage Road, few people would have envisaged that Chelsea’s players would be relieved and rushing to thank Kepa Arrizabalaga at full time.

At that point Tammy Abraham had been the game’s decisive figure and Chelsea had enjoyed a cruise at rock-bottom Watford.


Abraham netted Chelsea’s opener with his tenth goal of the season and ninth in the league to draw level with Sergio Aguero at the top of the Premier League scorer’s chart. 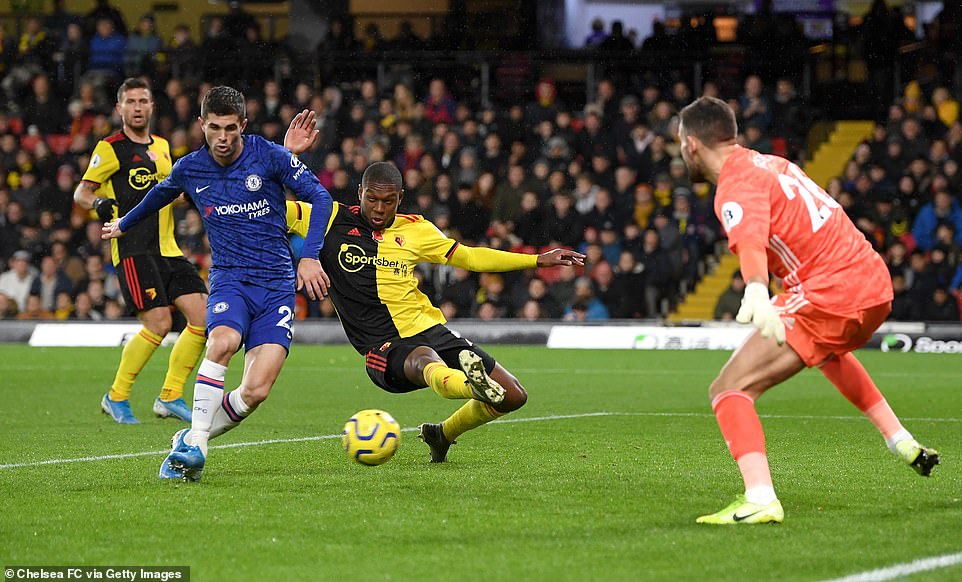 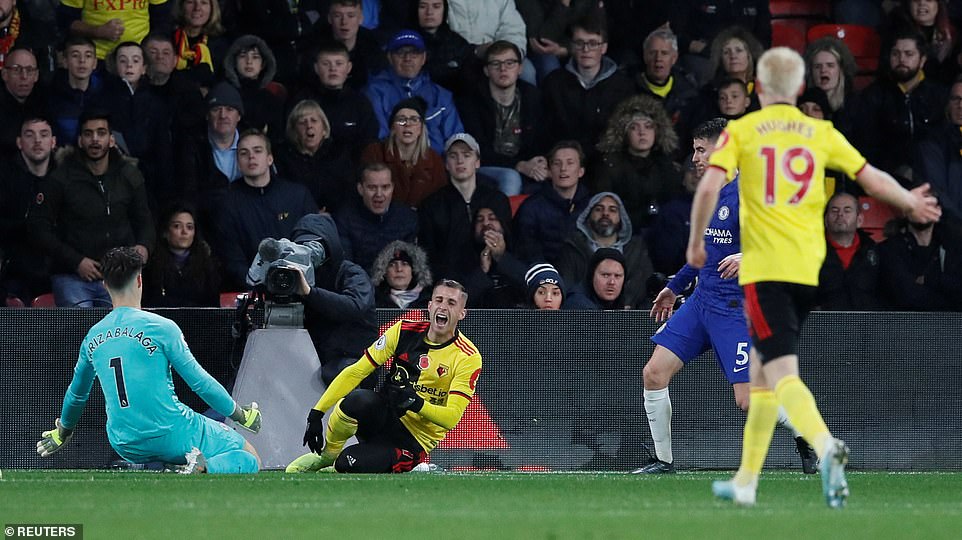 Gerard Deulofeu (middle) went down in the penalty area after contract from Jorginho, but the referee was not convinced 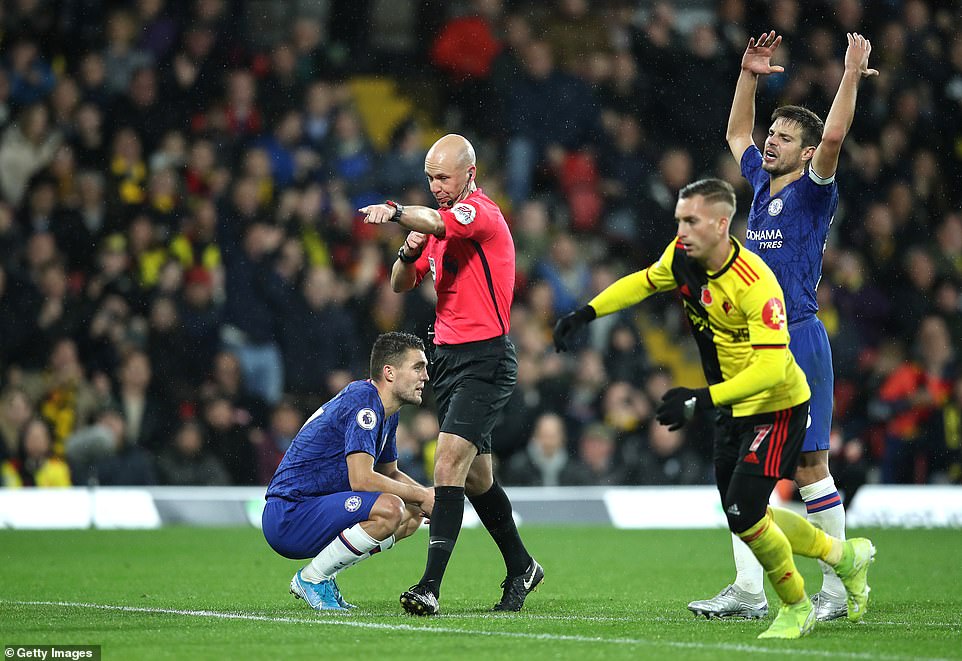 Despite VAR showing the Watford man delayed his fall, Anthony Taylor was instructed to award the penalty to Watford 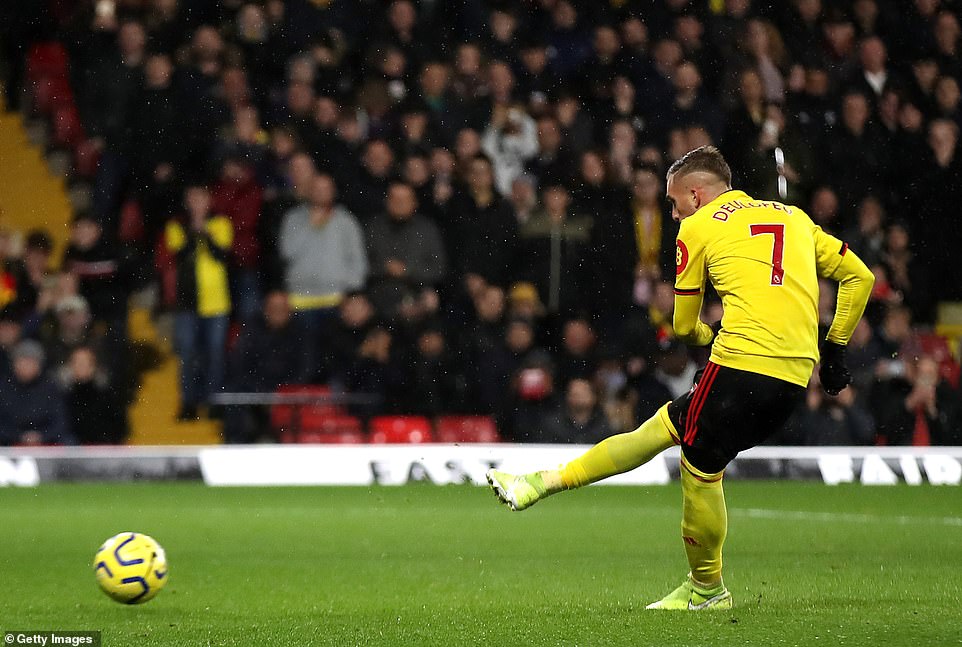 Deulofeu dusted himself off and converted the spot kick to set up a nervy final 10 minutes, but Chelsea survived

Abraham also set up Chelsea’s second for in-form Christian Pulisic, scorer of a hat-trick at Burnley seven days earlier, putting them on course for one of their more comfortable away wins this season.

But VAR has the ability to change games just like goals, and it did just that to set up a frantic finale and gave Chelsea a fightback to fend off that nobody saw coming.

Chelsea’s dominant display also didn’t deserve to end in such nerve-jangling fashion for Lampard and his side.

And the Hornets would have claimed the unlikeliest of points but for a stunning save from the final act of the game when Kepa plunged to his left to keep out a header from Ben Foster.

Veteran keeper Foster was having such an inspired afternoon it would have summed up his day had he scored, with Watford’s legendary former goalkeeper Steve Sherwood, who once scored against Coventry in 1984, watching on. 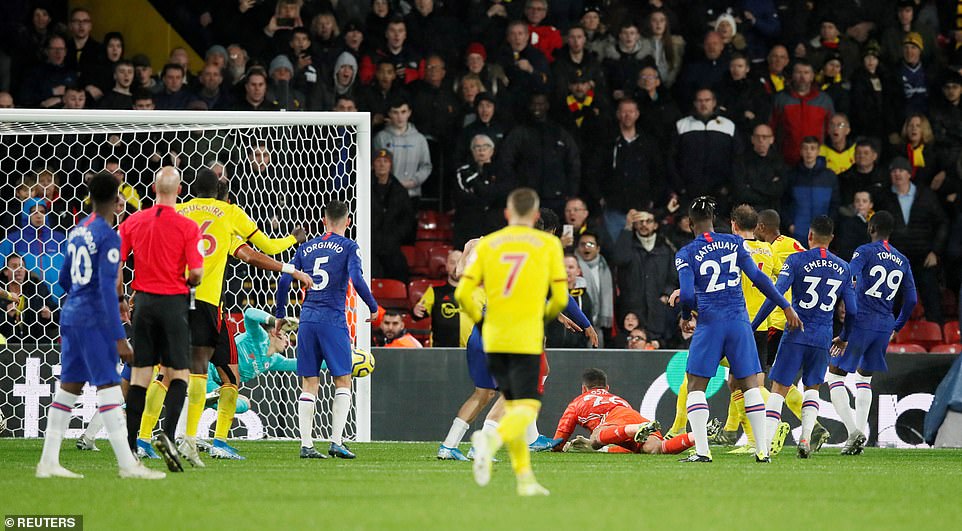 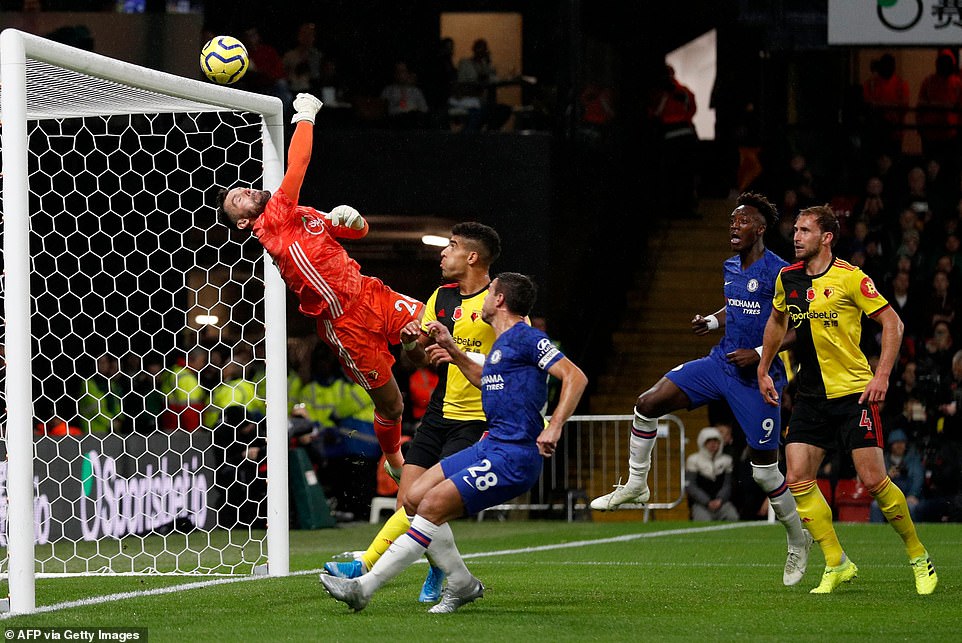 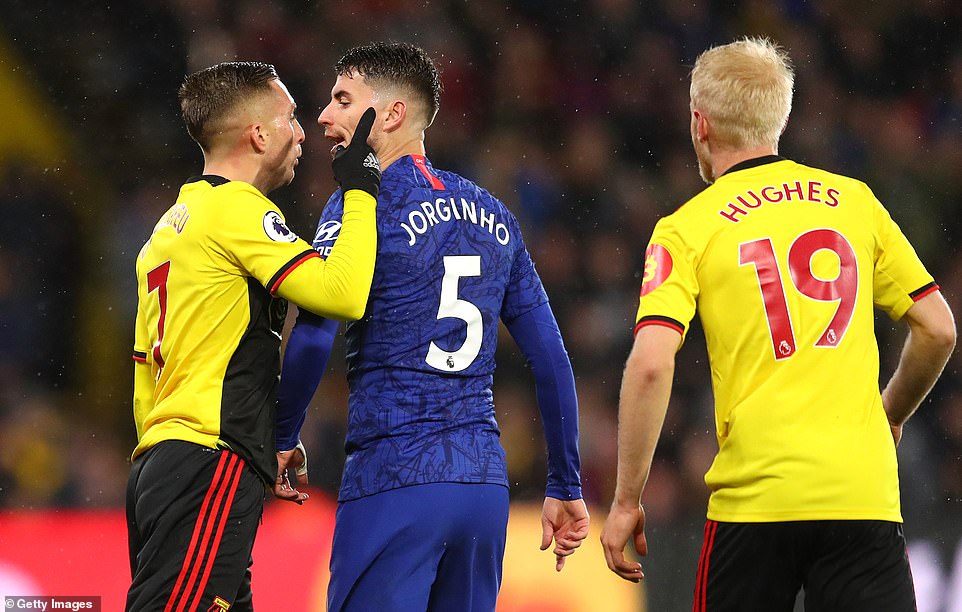 Had it not been for Foster, 36, Watford would have suffered a hammering to rival the 8-0 thumping at Manchester City in September, such was Chelsea’s dominance.

As it turned out it was Kepa who Chelsea’s players rushed to after the final whistle to thank for their 2-1 victory and club-record equalling seventh successive away win, which saw them climb up to third.

Lampard said: ‘It was a brilliant save. You obviously need your keeper to produce moments like that, that’s what they’re there for.

‘We got what we deserved. We dominated the game, played some great football for big periods of it, created some good chances and credit to Ben Foster because he made some great saves.

‘We played really well, our midfield was outstanding, but we just cannot have that sloppy bit near the end.’

Foster said: ‘If I score at the end that’s me retiring. Fair play to Kepa – that was some save.’ 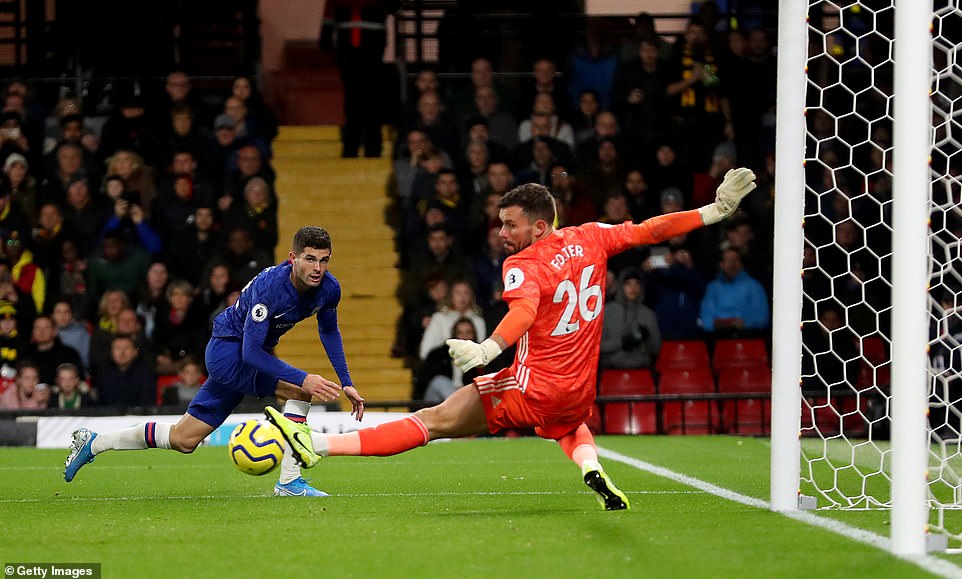 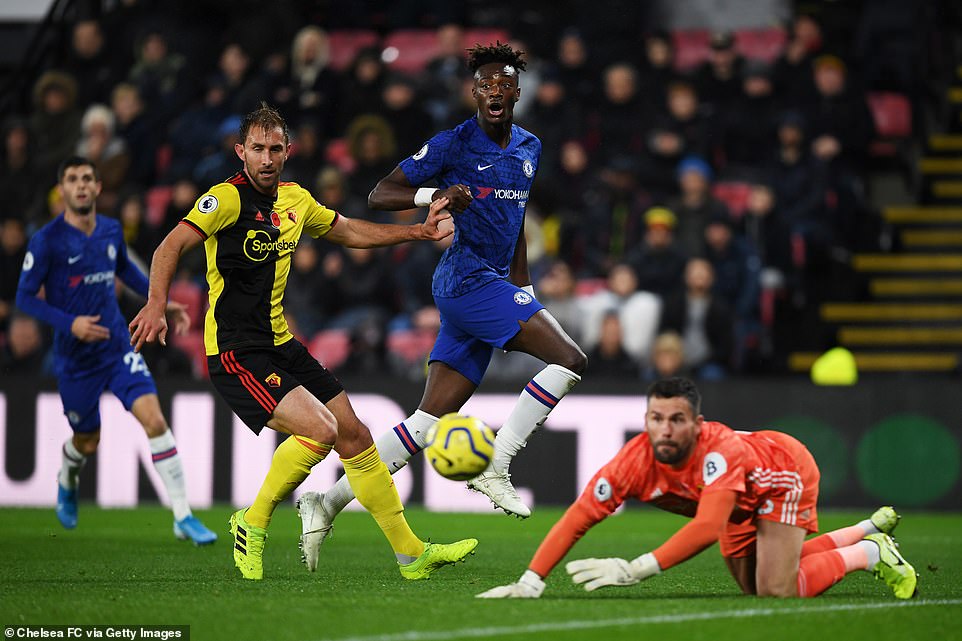 For a long while this looked like being Abraham’s day back in the spotlight.

After just five minutes he lobbed Chelsea into the lead with his first goal in six games after being put in behind Watford’s dozing defence, and Craig Dawson in particular, after a brilliant whipped pass from Jorginho who later picked up a fifth booking of the season and will now miss Chelsea’s clash with Crystal Palace next week.

Then the Foster show began. He produced two saves in quick succession to deny Abraham and Pulisic before producing a pair of stops either side of half-time to frustrate Mason Mount.

The second was good, diving high to his right to push away the England starlet’s rising left-footed effort.

The first was his best of the match though, showing brilliant athleticism to fingertip Mount’s thunderbolt onto the bar.

Watford’s overworked goalkeeper could only do so much though and in the 55th minute Christian Kabasele switched off and allowed Pulisic to creep in front of him and tap in Abraham’s cross from a couple of yards out.

Foster was then at it again, sticking out a boot to stop Pulisic scoring a second and bravely rushed off his line to distract Abraham as he looked to double his tally.

Watford were handed a lifeline in the 79th minute after a VAR intervention and lengthy review when Jorginho was eventually adjudged to have tripped Deulofeu, who ignored all the controversy to score. 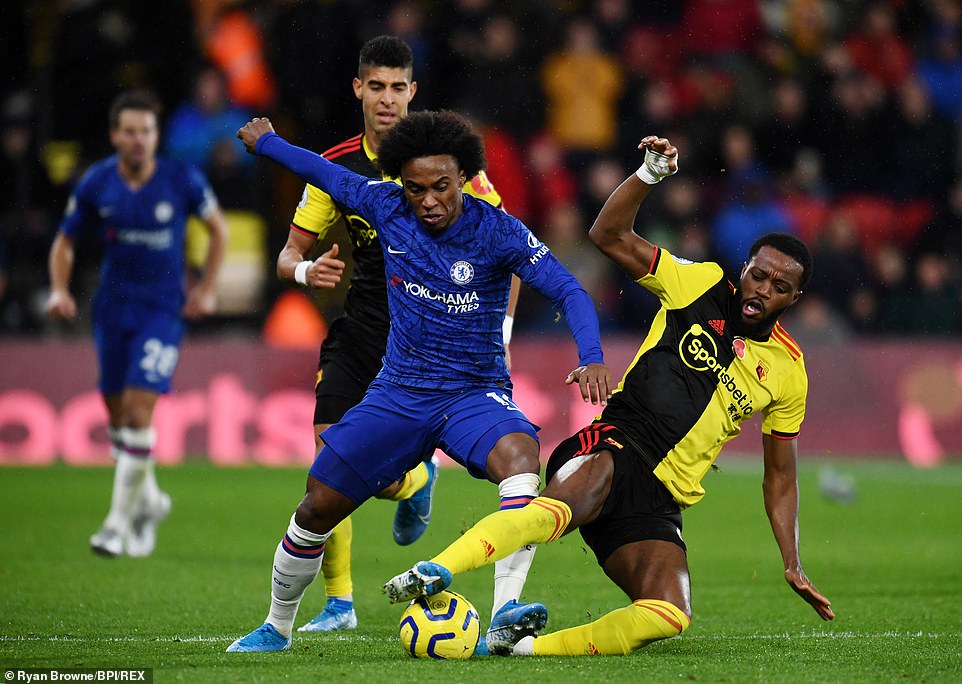 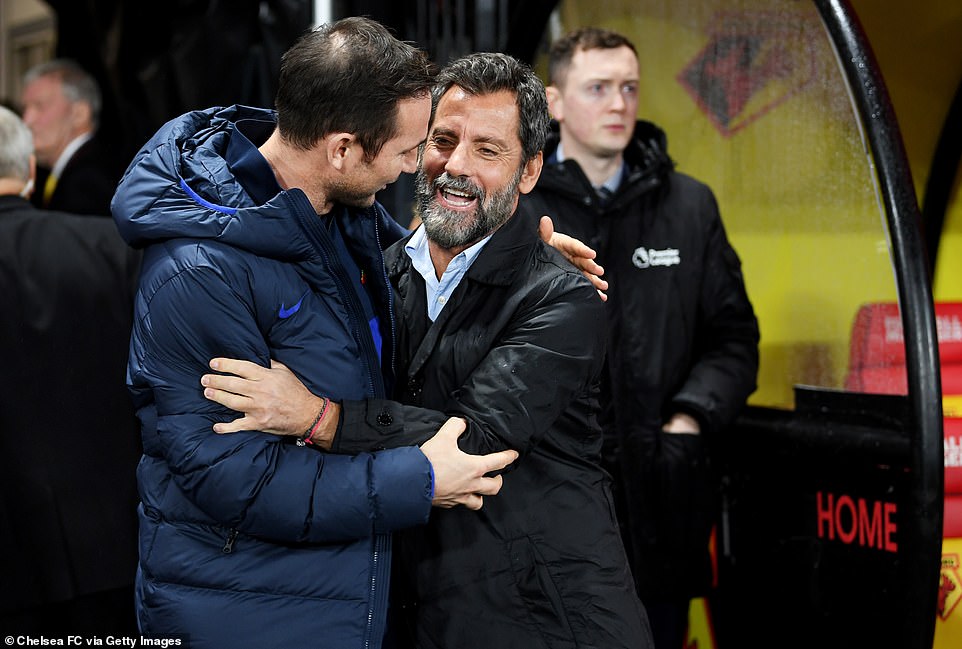 Kepa then produced his late heroics to keep out Foster’s diving header when he went up for a last gasp free-kick and prevent Watford stealing a point.

For the first time in their history Watford have now failed to win any of their opening 11 league games and Quique Sanchez Flores’s return is already turning sour.

His decision to make a change of right wing-backs late on rather than an attacking substitution led to chants of ‘you don’t know what you’re doing.’

Flores said: ‘In this situation we need to manage a lot of things, not just results. It is to care about the players. Between the fans and players we have an amazing team. We have to create positive energies.’

Pet canary goes viral thanks to moptop hair: ‘He’s quite a diva’

US competing in 2022 Beijing Olympics ‘wrong signal to send’ amid...