Champions-elect Manchester City blew the chance to clinch the Premier League title last weekend and will have to wait a little longer for a second chance.

With last weekend’s result trimming their advantage to 13 points, Pep Guardiola’s side now need to find another two victories from their remaining six games to put top spot beyond Manchester United.

Should they fail to get one of them against Tottenham at Wembley tonight, United would then have the chance to eat further into their lead as they play tomorrow and Wednesday. 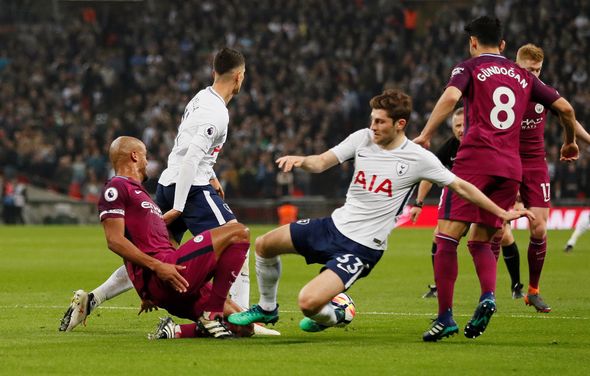 Mark: So by my calculations, Manchester City will win the Premier League next week at home to my beloved Swansea. We are the entertainment. Forget Shirts and Shorts, we might as well turn up in a Jester’s hat and bells on our toes.

Ben: Another example of why there’s no English referee’s at the World Cup 2018… dreadful performance so far from Jon Moss.

Habib: This is why VAR is needed. Lloris fouled Sterling outside of the area. Undeserved penalty.

45: Christian Eriksen has scored in each of his last four games in all competitions for Tottenham, netting five times – his best scoring run for the club.

44: Kevin De Bruyne and Gabriel Jesus are both booked in the space of a minute as Tottenham and their supporters start to believe again. Atmosphere bouncing now, they sense something special is on the cards. 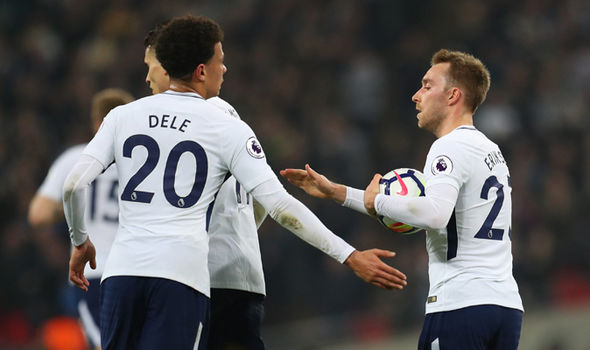 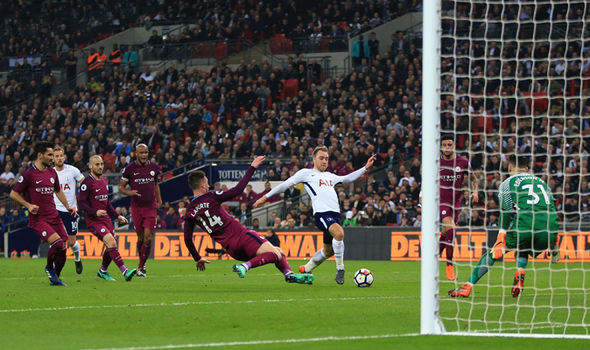 The Dane gets a kind ricochet from his shot and the ball finds the net – putting Spurs right back in it.

Surely this isn’t going to happen to Pep Guardiola’s side again?!

41: Ben Davies is living dangerously with a foul on Sterling. He’s already on a booking. Leroy Sane takes the free-kick and sends it to the moon.

38: Jon Moss is forced to give Trippier and Sane a ticking off for a bit of afters. Nothing too concerning.

Erik Lamela goes down looking for a penalty but it’s a blatant dive. He’s lucky to avoid a booking in all honesty.

35: Harry Kane shows his frustration as Erik Lamela spanks one wide of the post. He probably should have fed the striker through.

33: Tottenham have conceded a goal from the penalty spot in the Premier League for the first time in 59 games, last conceding against West Ham in November 2016. 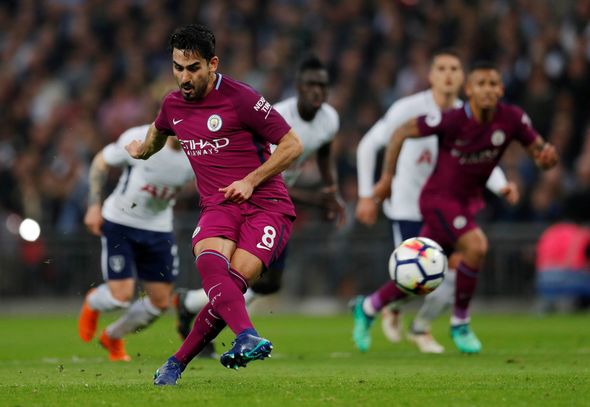 31: Spurs are chasing shadows. City are moving the ball at a rate of knots and look back to their brilliant best.

28: Spurs imploding, or exploding… it doesn’t matter, they are simply all over the place. Ben Davies is lucky to avoid a red card when flying into a tackle with Kompany.

27: Well the early stages suggested that something like this would happen. Spurs haven’t been at the races.

23: This is an absolute stonewall penalty IF it’s inside the area! Hugo Lloris recklessly storms off his line and blatantly chops Raheem Sterling down but it looks to be slightly outside the area. 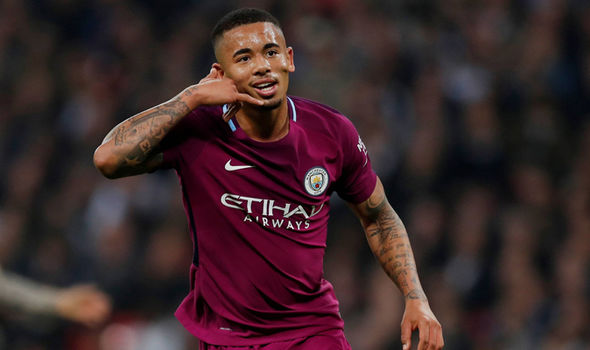 21: Silence inside Wembley as Manchester City take the lead.

The visitors play it around the back, Spurs push forward and Vincent Kompany finds Gabriel Jesus with a terrific ball forward.

The City striker takes it in his stride and finishes past Lloris with Sanchez breathing down his neck.

20: Eriksen looks to link up with Kane but Kompany is quickly on him and clears the danger. Sterling is asking for a penalty when Dembele makes contact inside the penalty area but referee Jon Moss isn’t interested.

17: Dembele and Dier are struggling to cover the midfield and keep track of De Bruyne, Silva and Sterling. It means Eriksen is having to drop deeper to help. Kane is isolated.

14: You just get the sense Tottenham aren’t completely comfortable this evening. Something’s not quite clicking for the hosts as City continue to boss possession.

11: Sky Sports pundit Gary Neville: “City have settled down quicker, Spurs cannot get to grips with them, as Sterling has another chance. There’s too much space, it’s so unlike Tottenham. The back four usually push up and connect with the midfield but Silva and De Bruyne have all the space in the world at the moment.” 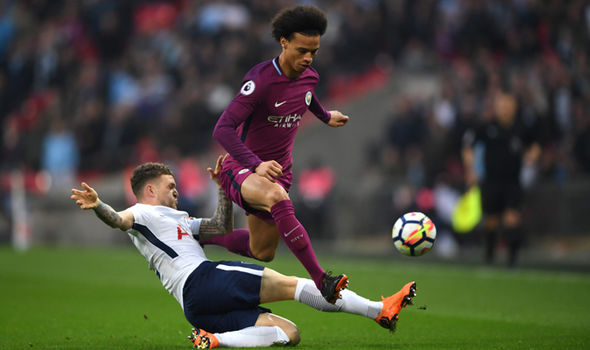 9: I was expecting Spurs to fly out of the traps but it’s City who are taking the game to Tottenham. The champions-elect don’t look fazed by their back-to-back-to-back defeats…

6: Woodwork! What a volley! Hugo Lloris just stood motionless as a deflected cross dropped to Sane, whose crunching effort slammed against the post.

3: So it looks like Christian Eriksen is playing in the No.10 role with Dele Alli on the left and Erik Lamela on the right. I should imagine that’ll change if things don’t click for Alli.

1: And we’re off! Can Tottenham pile on the misery or will City bounce back with vengeance. Let’s find out!

19:40: Manchester City trio Kevin De Bruyne, Leroy Sane and David Silva have been shortlisted for the Professional Footballers’ Association Player of the Year award for the 2017-18 season.

Their brilliance in City’s outstanding Premier League campaign to date has been recognised by their peers, with Tottenham striker Harry Kane, Liverpool forward Mohamed Salah and Manchester United goalkeeper David De Gea making up the six-man shortlist for the award.

The winner will be announced at the PFA’s annual awards ceremony in London on Sunday, April 22.

Go on then, who wins it? 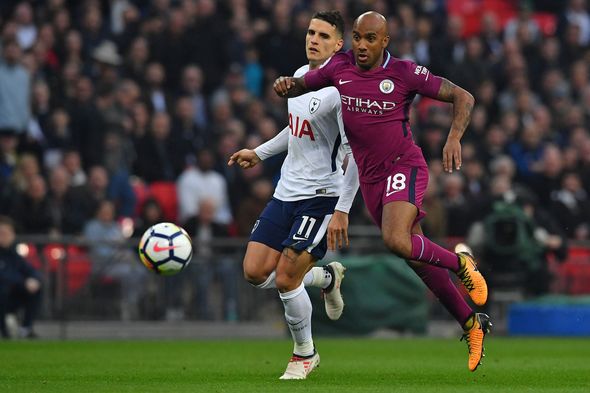 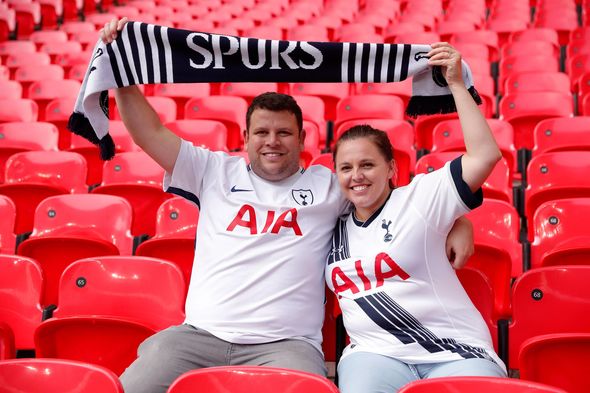 19:35: It has been a testing 10 days for Manchester City. The runaway leaders have seen their Champions League hopes torn to shreds by Liverpool and were denied, if only temporarily, their title celebrations by derby rivals Manchester United last Saturday evening.

Three successive defeats, something they have not experienced since February 2016 during Manuel Pellegrini’s reign, have thrown a spanner in the works of the City machine. A fourth by Tottenham at Wembley would extend a miserable run and leave manager Pep Guardiola with further questions to ask about his squad.

19:30: Tottenham have made four changes to their side for the blockbusting Premier League game with Manchester City at Wembley.

Manchester City, who can put one hand on the title with victory at the national stadium, are without the injured Sergio Aguero and suspended Fernandinho as they aimed to stop a run of three successive defeats. 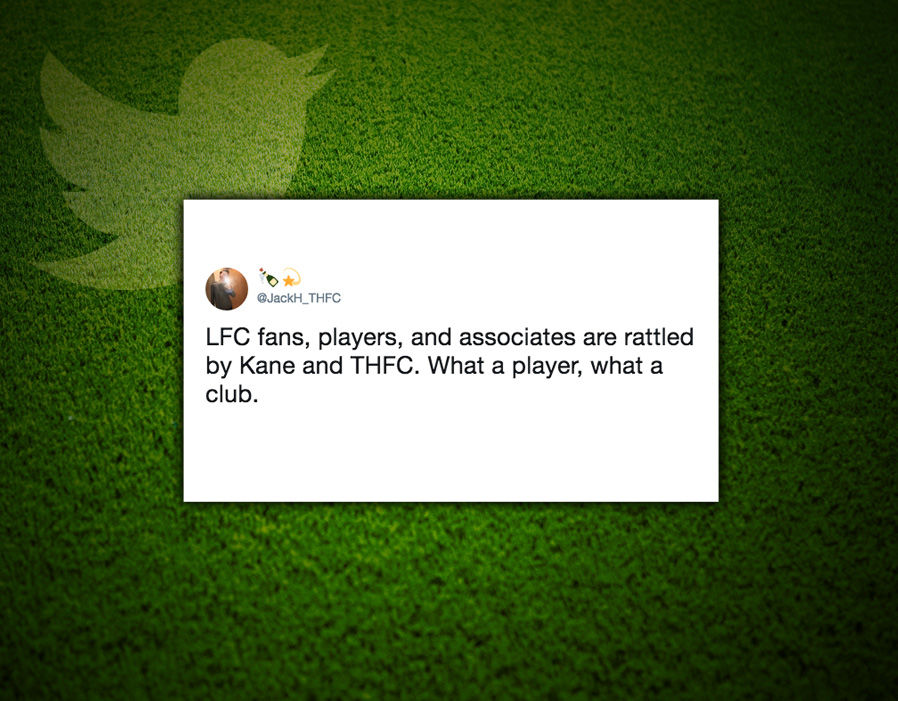 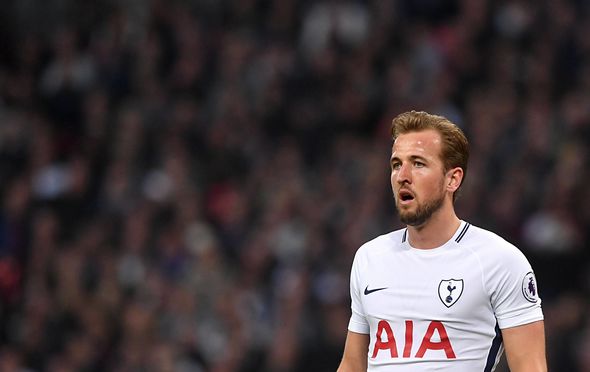 Danny Rose will miss out for Spurs due to a calf injury. The left-back picked up the minor problem after playing 90 minutes against Stoke, though his absence is not expected to be lengthy. Midfielder Harry Winks is in Qatar seeking answers to an ankle injury while defender Kyle Walker-Peters (hamstring) also misses out against the champions-elect.

Manchester City are without top scorer Sergio Aguero due to a knee injury. Midfielder Fernandinho is also missing through suspension and defender John Stones is still troubled by a thigh problem. Left-back Benjamin Mendy, out since September with knee ligament damage, also remains on the sidelines.

US competing in 2022 Beijing Olympics ‘wrong signal to send’ amid...