Lord Nicklas Bendtner has made his final bow in football.

The popular former Arsenal striker confirmed his retirement from playing on Thursday at the age of 33 – after a career filled with controversy that overshadowed his talents on the pitch.


Wherever any off-field antics were involving footballers, Bendtner wasn’t too far away – so much so that you forgot he won top-flight titles in Italy and Norway, as well as netting a Champions League hat-trick and 30 goals for Denmark.

Often involved in crazy nights out, embarrassing misses in front of goal and some hilarious moments, Sportsmail goes through the craziest moments from the Great Dane’s career – including the good, bad and the utterly ridiculous… 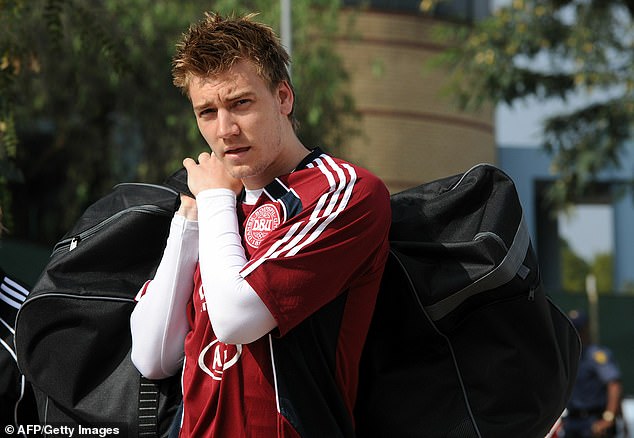 Being a predatory striker and a charismatic person mean the Danish forward simply had to have an iconic celebration or two.

But there is one moment football fans across Europe will always remember Bendtner for, as he got into hot water after netting for his country against Portugal at Euro 2012.

The tall striker headed home his second goal of the match to level the scores at 2-2 in the second half, before pulling down his shorts to reveal he had underwear with the Paddy Power logo on it.

The forward ended up breaking UEFA rules whilst doing the guerilla marketing stunt and was handed a one-match ban, as well as a £80,000 fine from European football’s governing body. 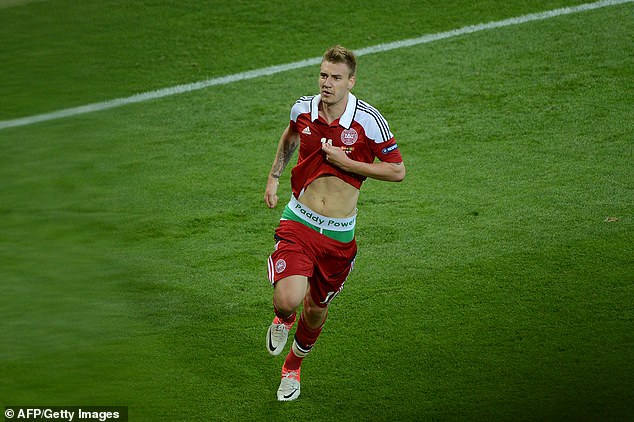 SEX GAMES BEFORE A MATCH

Bendtner was often known for his ‘bad boy’ image but one post-match celebration went too far as he ended up playing sex games with a team-mate and two girls in the swimming pool of a hotel his team were staying at on an away day.

Bendtner admitted that he was involved in some naughty activities in the indoor pool after he snuck out of his room to the hotel bar.

In his autobiography, Both Sides, the striker recalled: ‘We weren’t going home until the next day and once the hotel corridor fell silent two of us snuck down to the bar. We got talking to some local girls.

‘Suddenly we decided to skinny dip in the indoor pool. It turned out the pool had a slide and before we knew it we’d started our own internal competition.

‘One couple would judge the other on the way down the slide — while having sex in every possible position.

‘At the next training session, my mate showed up with his knees glowing bright red. He’d torn up his skin when he took his girl doggy style.’

Arsene Wenger was the man who introduced Bendtner to English football, but the Danish striker’s career never really took off once he ditched the Gunners and Wenger’s mentorship.

After being an important part of the Arsenal first-team between 2006 and 2013, the forward managed to be one step away from joining Crystal Palace on transfer deadline day.

Bendtner was sat with Crystal Palace chairman Steve Parish and then-manager Ian Holloway at Selhurst Park looking to complete the deal, when Wenger called the Dane to tell him the transfer had to be called off. 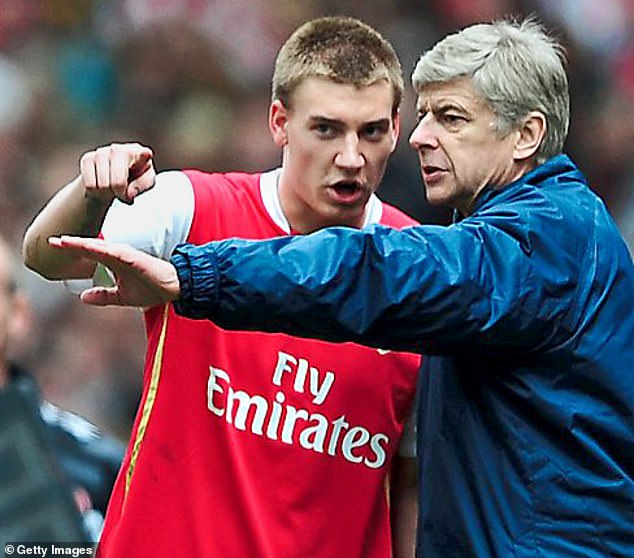 Instead of heading back to the then-Champions League side Arsenal quietly, Bendtner went on an expletive-rant directly at the Arsenal manager, calling him some unforgivable names.

Bendtner recalled in his book: ‘We’ve spent most of the day there. Why can’t Arsenal pull their f****** fingers out and sell me, so I can get on with my career? It’s after 8pm when Wenger calls. He gets straight to the point.

‘”I’m afraid your transfer isn’t going to happen,” he says. “We’ve not been able to buy the striker we wanted. So you’re our back-up. That’s your job for the next year.” 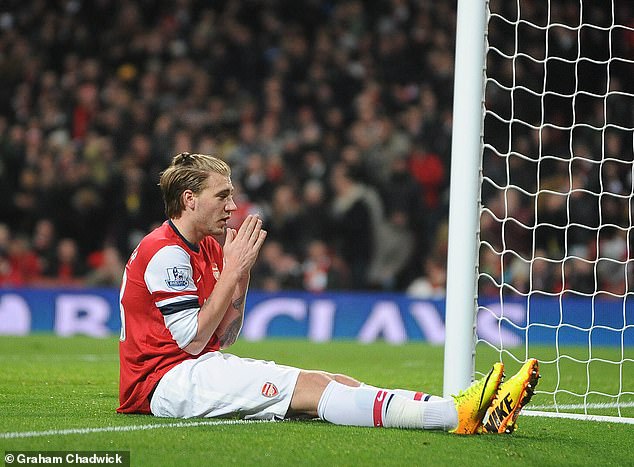 ‘”We can’t stand each other any more,” I say, ending my tirade. “It’d be best if we parted ways.”

‘”Well, OK — that’s quite possible,” Wenger replies in his heavy French accent. “But it’s not going to happen. See you at training.”‘

It’s fair to say Bendtner and Emmanuel Adebayor did not get on well. The Dane revealed the Togo striker was the one player he couldn’t stand, even though he was sat right next to him in the dressing room for several years.

Tensions between the two Gunners forwards came to a head during Arsenal’s embarrassing 5-1 Carling Cup semi-final defeat to arch-rivals Tottenham, a match which Bendtner started but the Togo forward was brought on in the second half. 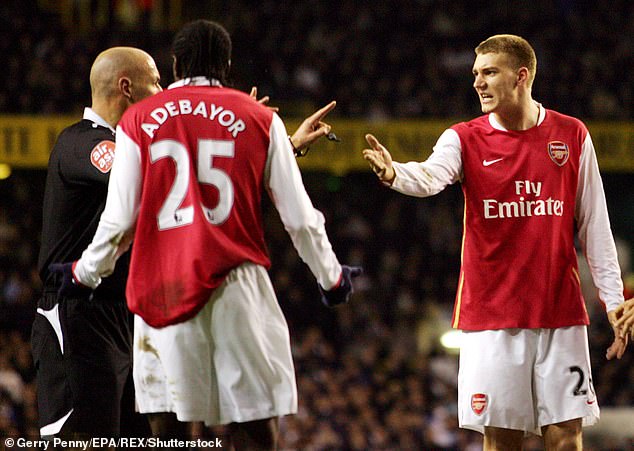 Even though Adebayor ended up on the scoresheet, an incident late on in the game saw both players decide to fight each other – even though they were on the same team.

Recalling Adebayor coming on in his autobiography, Bendtner remembered: ‘On the way past me, Adebayor shouts that it’s my fault he has to come on and waste his energy: “I’m here because you’re playing like s***.”

‘It’s not especially encouraging, and shortly after when we win a corner, we both seek out the back post. There’s a lot of pushing and jostling, and suddenly we’re fighting each other. 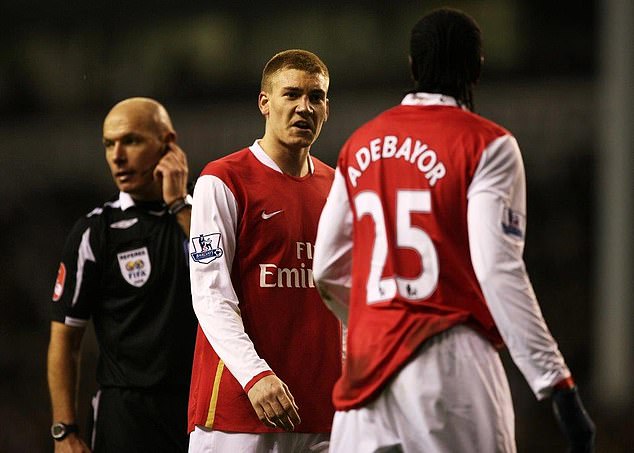 ‘What I do remember is him sticking his head forward. That’s the thing with him. He behaves illogically. It feels like a headbutt right on the bridge of my nose. The blood gushes out and my nose swells up.

‘When we finally clash in the dressing room, we have a lot of s*** to say to each other. Things I wouldn’t be able to utter 12 years later. Neither of us is holding back, and it has consequences. The boss fines us both two weeks’ wages.’

CAUGHT WITH HIS PANTS DOWN

Arsenal crashed out of the Champions League semi-finals in 2009 as a Cristiano Ronaldo-inspired display put Manchester United into the Rome final at the Gunners’ expense.

With fans of the north London team already upset, they were angered when Bendtner was spotted exiting a London nightclub at 4am with his belt undone and trousers down by his ankles.

In his book, the Danish striker was not afraid to admit he was the target of women who tried to sleep with him then blackmail the footballer with some evidence of their wild nights together. 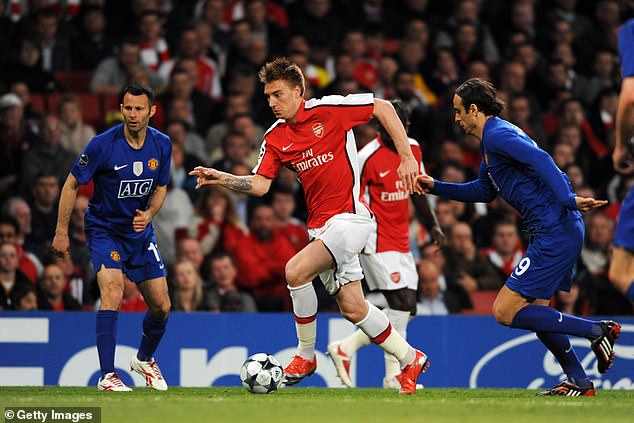 But the Danish forward claims he was spiked on that particular evening and that sparked fury from Arsenal manager Wenger.

He claimed: ‘After hanging out in the bar area, one of the totally aggressive gold-diggers came over. I began chatting at random and from then it didn’t take many seconds before we disappear off towards the toilets.

‘Here we must apparently have done the deed. Or at least we tried to. Then I passed out, and no one — not my mate or my Danish girl — can get hold of me.

‘When Boujis closes an hour passes while they try to get through to me. I stagger as I’m escorted out to my taxi. Someone had put something in my glass. They call it “spiking”. That has to be the explanation. Wenger isn’t happy, and for the second season he fines me two weeks’ wages.’

That was, incredibly, not his only problem Bendtner encountered on a night out.

Two years later he was accused of threatening a taxi driver while worse for wear in Copenhagen, on the same night his Arsenal team-mates had been knocked out of the Champions League by Bayern Munich.

Bendtner was reported to have unbuttoned his trousers and rubbed up against the side of the taxi by Danish newspaper, BT.

In November 2018 he was sentenced to 50 days in prison, which he served under house arrest, for assaulting a taxi driver.

Bendtner was called a lot of things during his career but did manage to coin a particularly popular nickname – or title, as we should put it.

Fans started to call the striker ‘Lord Bendtner’ – an ironic nickname stemming from a previous relationship with former Baroness Caroline Iuel-Brockdorff, a socialite and close friend of the Danish royal family. 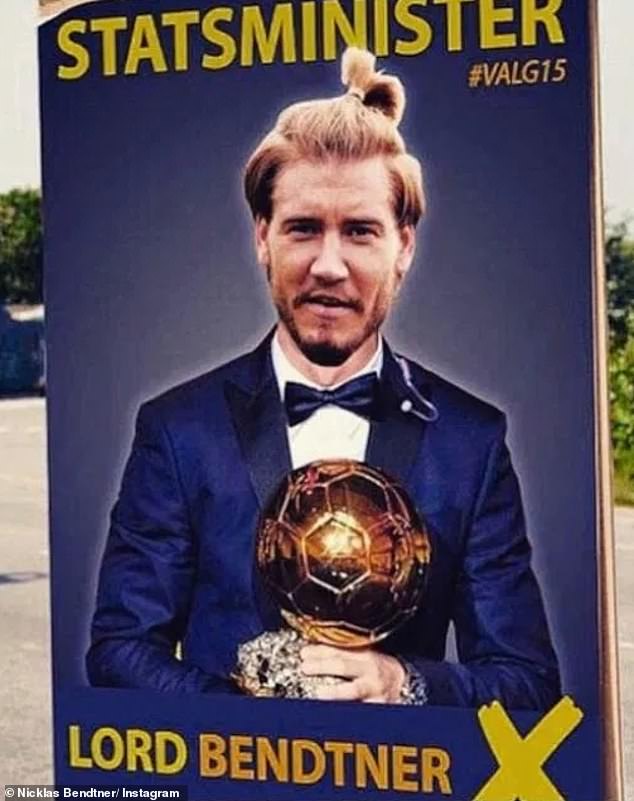 But the nickname became a legitimised title in 2015 when a Danish magazine purchased a prestigious piece of Scottish land on the player’s behalf.

Bendtner has also taken part in the joke, once uploading on Instagram a poster of him holding the Ballon d’Or and running as a candidate for Prime Minister in the June 2015 Danish election.

While the Danish striker will probably be known for his off-the-field antics, it’s worth remembering that he did have some important moments on the pitch as well.

His finest hour in an Arsenal shirt came in the 5-0 victory over FC Porto in the Champions League quarter-finals in 2009, where he became only the second player in Gunners history to score a treble in Europe’s premier club competition.

The following season, Bendtner scored for the Gunners in the Nou Camp to put briefly put them ahead against Barcelona, though four strikes from Lionel Messi crushed that dream. 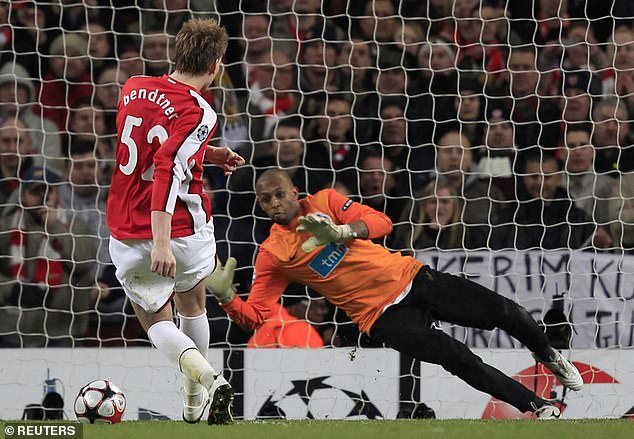 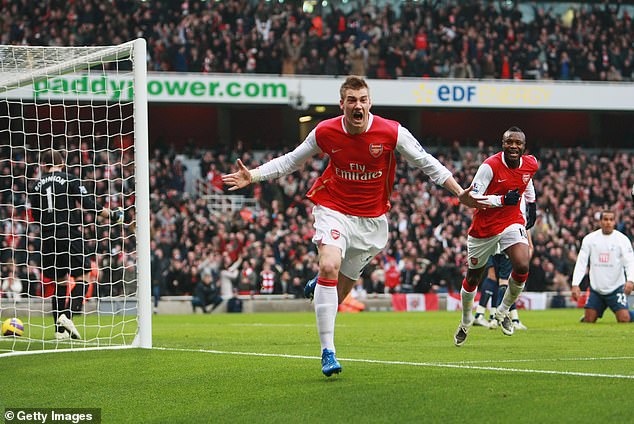 He also netted the Premier League record for the fastest goal scored by a substitute in 2006, when he came off the bench to head in Cesc Fabregas’ corner six seconds later in a winter north London derby.

One Arsenal memory that won’t stick out for him, however, is blocking Alex Hleb’s goalbound shot on the Liverpool goalline during the Gunners’ Champions League quarter-final loss to Liverpool in 2008.

But earlier in his career, the Dane also helped Birmingham City to Premier League promotion in 2007, while his loan spells at Juventus and Vfl Wolfsburg saw him pick up medals in Serie A and the German Cup.

Towards the end of his career, he won back-to-back Norwegian top-flight titles with Rosenberg and was also named Danish Footballer of the Year in 2009.

All the iPhone 12 models compared: From the diminutive Mini to the Pro Max powerhouse

Ivan Lendl says tennis ‘GOAT’ debate will be decided by who...