Novak Djokovic was sensationally defaulted from the US Open on Sunday night after petulantly smashing the ball at a ball girl in a fit of pique.

The world number one, massive favourite for the tournament, was slung out after lengthy deliberations with tournament officials while playing his fourth round against Spaniard Pablo Carreno Busta.


The 33 year-old Serb had just dropped serve for 5-6 against the number 20 seed when he angrily swiped away a ball that appeared to hit the back fence ballkid in the throat.

The volunteer helper keeled over and the rules are quite clear about such abuse of those working on the court: the player has to go.

Referee Soren Friemel was summoned onto court inside the giant, deserted Arthur Ashe Stadium by umpire Aurelie Tourte. He was told, after plenty of debate, that there was no option but to default him from a tournament that has already seen a surfeit of drama.

Djokovic attempted to plead his case and could be heard arguing his case, all to no avail.

‘She doesn’t have to go to the hospital for this,’ he said as he stood at the net, a shocked look on his face. ‘You’re going to choose a default in this situation? My career, Grand Slam, centre stage?’

Djokovic, of Serbia, checks a lineswoman after hitting her with a ball at the US Open

Unbelievable that @DjokerNole has been defaulted. This was the correct decision under the rules regardless of intent or not. Novak should have stayed for the press conference & apologise. We must take responsibility for our actions no matter how difficult the situation is.

Friemel, backed up by senior official Andreas Egli, held firm, even when he added: ‘You have a game penalty, set penalty, many options.’

When he had exhausted his excuses and been informed of the decision he walked over with relative calm over to the Spaniard and shook hands.

This was arguably the most dramatic default since British umpire Gerry Armstrong, now the Wimbledon Referee, disqualified John McEnroe from the Australian Open 1990 for verbal abuse.

Djokovic had looked extremely likely to add to his seventeen Major titles and had been in imperious form, boasting a 26-0 record for 2020 which looked likely to extend to the end of this strange season.

It is a massive blow to his hopes of usurping Rafael Nadal and Roger Federer, both absent from Flushing Meadows, but who stand on nineteen and twenty respectively. At the age of 33 he can hardly afford to spurn such opportunities.

One upshot of the drama is that there is going to be a long-awaited new Grand Slam champion in men’s tennis for the first time since Marin Cilic won in New York six years ago, with the young guns eagerly waiting in the wings for one of the established stars to slip.

There appears little question that Djokovic’s angry swish of the racket did not mean to injure anyone, it was just an act of frustration. Immediately that he saw he had hit his unintended target he gestured his apology, and knew that he was in deep trouble.

Tim Henman was defaulted from Wimbledon 25 years ago for a similar mishap, and he knew better than anyone that there was no alternative to the punishment. 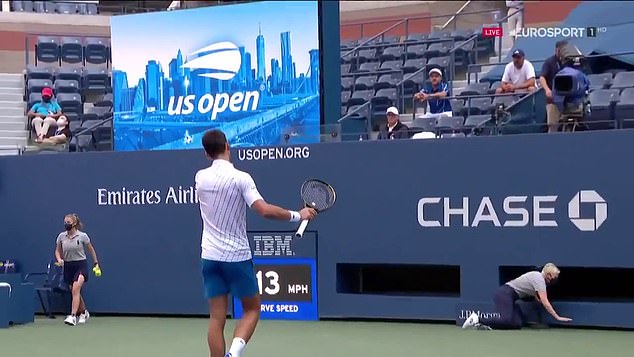 “It’s the right decision,” said Henman on Aamzon Prime. “It happened to me at Wimbledon 1995 in the same scenario, You have to be responsible for your actions, when you look at the facts you have to be defaulted.”

This time it was borne of someone who sometimes acts as if he is above the sport, as he tries to cement a legacy comparable to that of Nadal and Federer.

Djokovic has flirted with this kind of disaster before, with instances of him thrashing balls away in anger that have gone into the crowd, or snatching towels from ballkids in an aggressive manner.

There was a notable example in 2016 at the French Open when he played Czech Tomas Berdych. He hurled his racket into the clay in the direction of a line judge, and when it bounced up it was only thanks to the official’s reflexes that is missed his head. Otherwise he would have been gone there as well, and not gone on to win his one title at Roland Garros.

In a way this is an appropriate end to a lockdown summer that has badly tarnished the reputation of a highly intelligent, driven and complex man who is, without doubt, among the greatest players ever, especially on hard courts.

He organised the disastrous Adria Tour around the Balkans, which needed to abandoned when numerous participants, including himself and his wife, tested positive for Coronavirus.

The whole guiding principle behind the exhibition series seemed to be that Coronavirus was something that could be overlooked, and there was a marked lack of social distancing running through the whole production. It overshadowed his substantial charitable donations to Covid charities.

Before that he was criticised by one of Serbia’s top government epidemiologists for his anti-vaccine views, and there were embarrassing exchanges on social media with health gurus.

He left Flushing Meadows abruptly last night and must now decide on his next move ahead of the French Open, which is due to happen later this month.