Arsenal fans have praised Kieran Tierney after footage has emerged of him calling Benfica’s Darwin Nunez ‘a f***ing diving c***’ during their Europa League clash.

The Gunners were seven minutes plus stoppage time away from crashing out of the competition, when the full back went in for a 50/50 challenge on the Uruguayan striker.

Nunez theatrically hurled himself up in the air to try and win his side a free-kick, which prompted the Scotsman’s response.

The referee Bjorn Kuipers didn’t say anything regarding the challenge and waved on as Granit Xhaka went out to resume play with a throw-in.

Arsenal didn’t waste any time, as Pierre-Emerick Aubameyang headed home a winner three minutes later to make it 3-2 on the night, sending them through to the last 16 with a 4-3 aggregate victory.

Fans have reacted to Tierney’s outburst and praised his mentality late-on in a crucial game.

George Lennox tweeted: ‘Can take the boy out of Glasgow but not the Glasgow out of the boy.’

Another used commented: ‘Boy that Scottish accent when they’re swearing.’

While another person on Twitter commented: ‘Hands up who wants no crowds back ever? Classic Kieran.’ 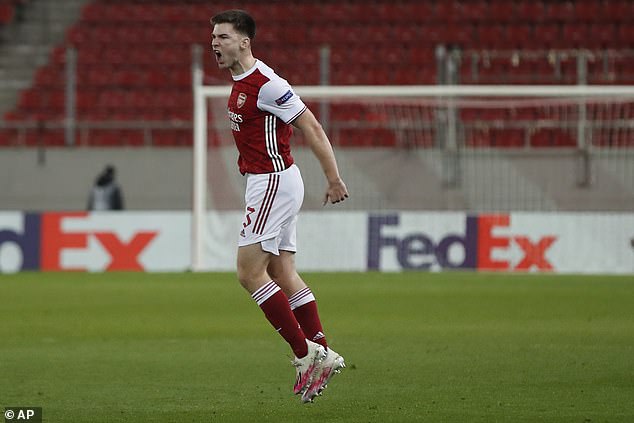 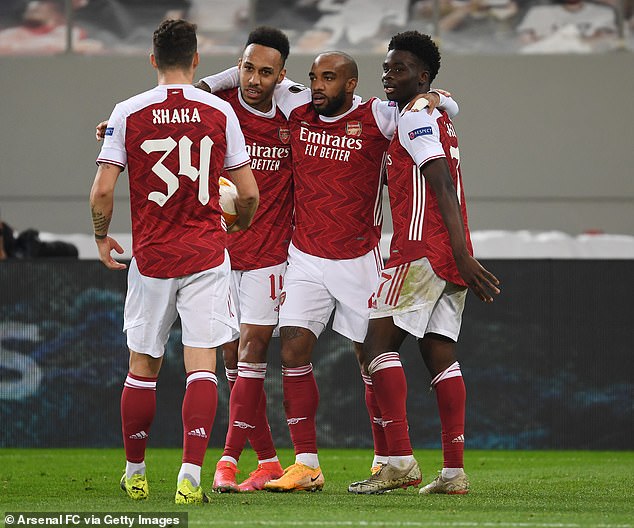 Tierney has become a popular figure at the club since joining for £25m from Celtic back in the summer of 2019.

The Scottish international started the fightback against Benfica when the Gunners were 2-1 down on the night and 3-2 down on aggregate by firing home from the edge of the area to give the north Londoners hope of progressing to the last-16 stage.

Tierney then ushered his Arsenal team-mates back to find a winner – which they did through Aubameyang’s header just minutes from time.

Former Arsenal defender Martin Keown claims Tierney’s attitude after scoring his goal is the temperament Mikel Arteta’s side needs as they try to salvage something from this season.

Keown told BT Sport: ‘It is the symbolism you want. That’s the player you want, someone who is in charge of your own destiny and he proved it there.

The Gunners have been drawn against Olympiacos in the last-16 of the Europa League.

It gives them the opportunity to get some revenge, after the Greek side knocked them out on away goals in the round of 32 stage last season.

Marilyn Monroe’s diet and beauty secrets: How to get them

Six Nations 2018 LIVE: Latest score from Wales vs Scotland at...