Watford simply gave themselves too much do. On the day, at Arsenal, three down in little more than 30 minutes proved to be too much, despite improvement and two goals to generate a frantic finish.

At Vicarage Road, they might reflect in similar fashion across the season as a whole: that it was over before it began following a desperately bad start to the campaign.


They might blame Javi Gracia or Quique Sanchez Flores because they like the head coaches to carry the can. It seems to be the key reason they employ them. 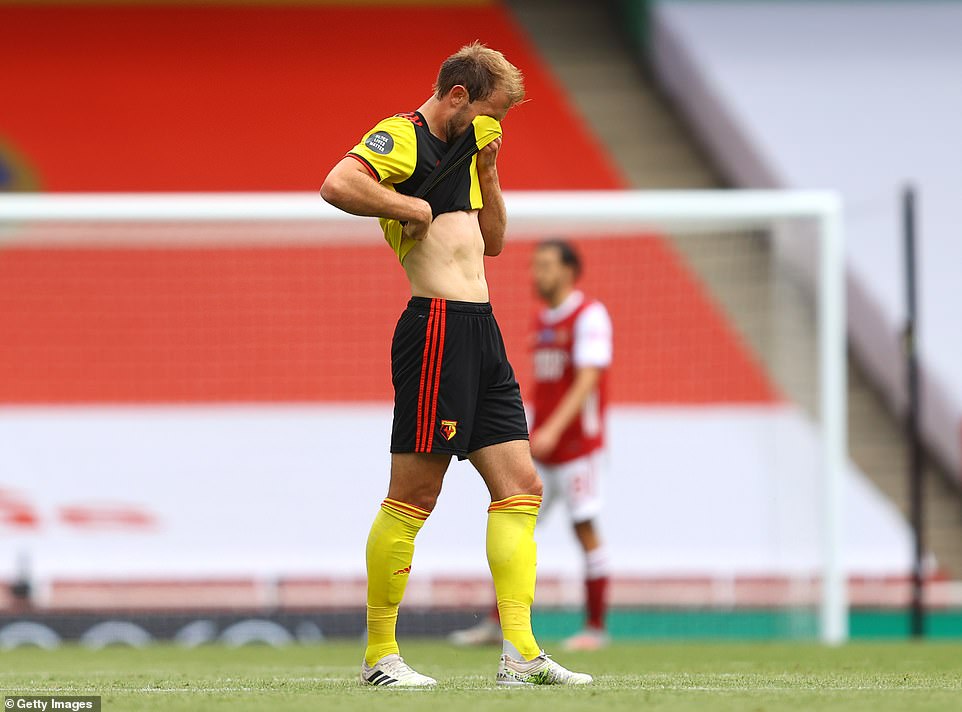 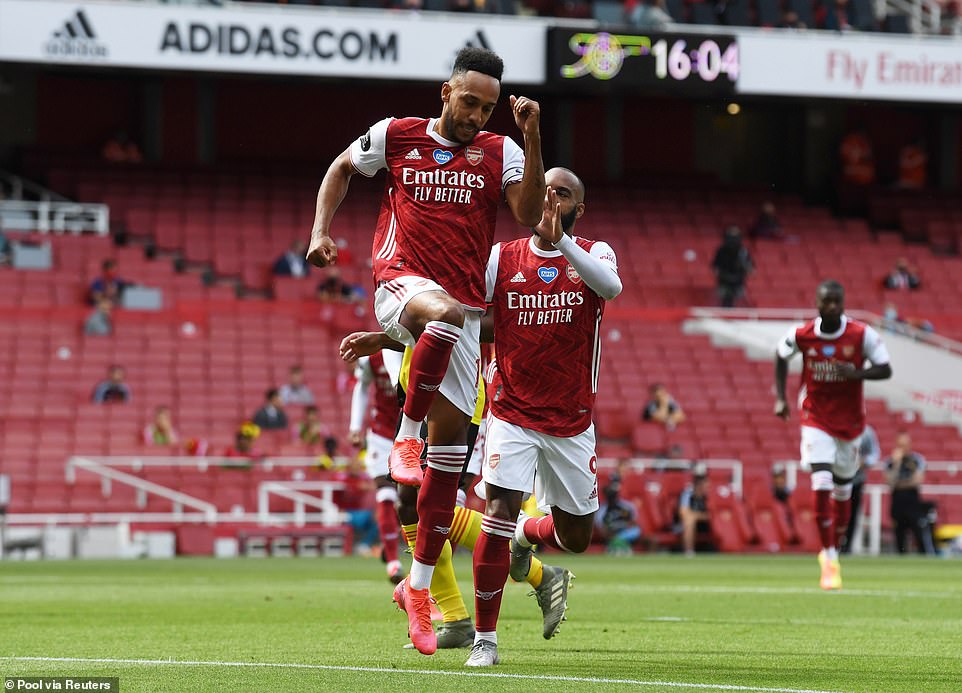 The visitors got off to a poor start when Craig Dawson fouled Alexandre Lacazette, and Pierre-Emerick Aubameyang scored 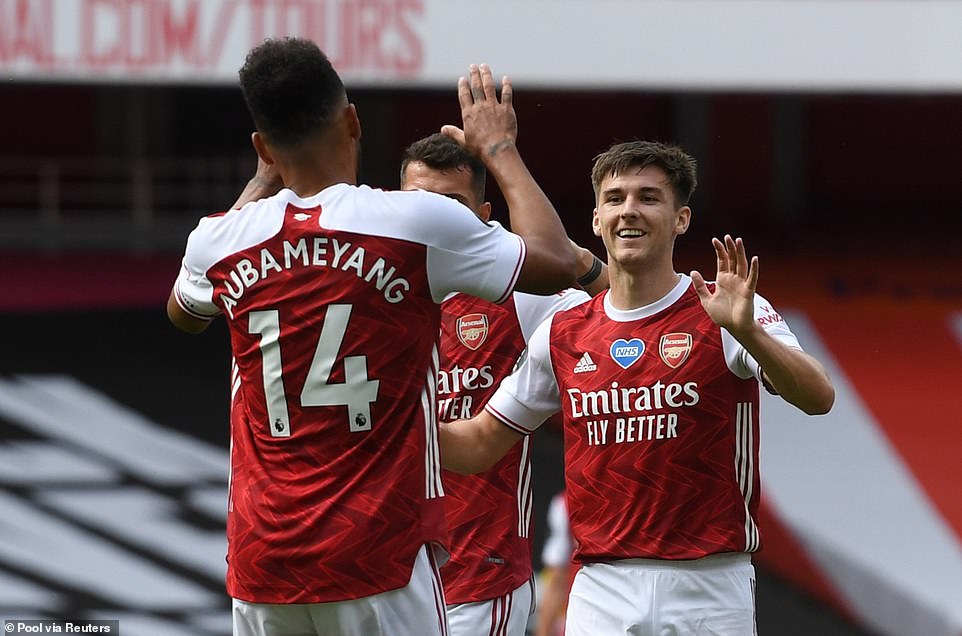 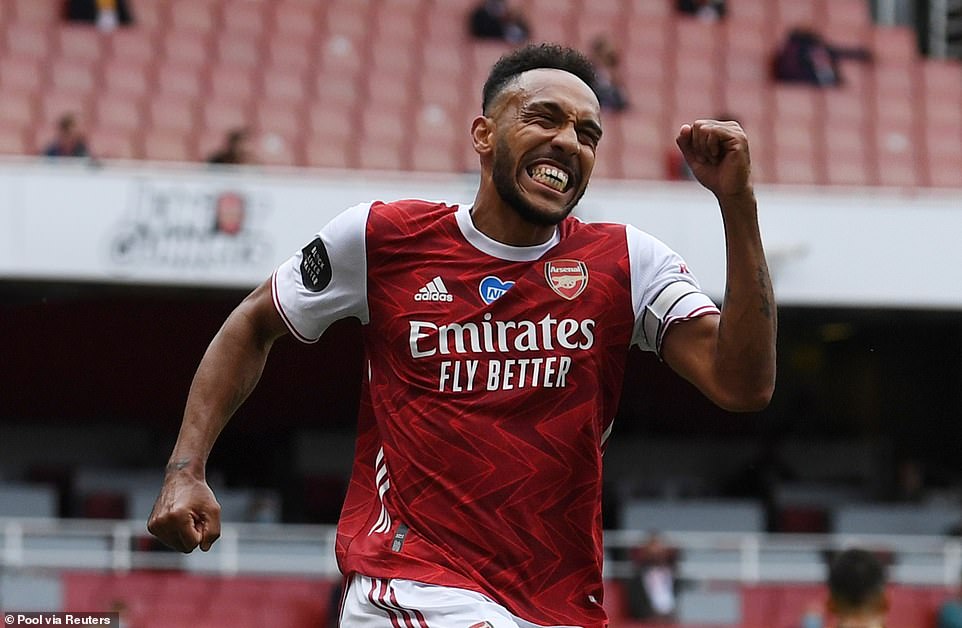 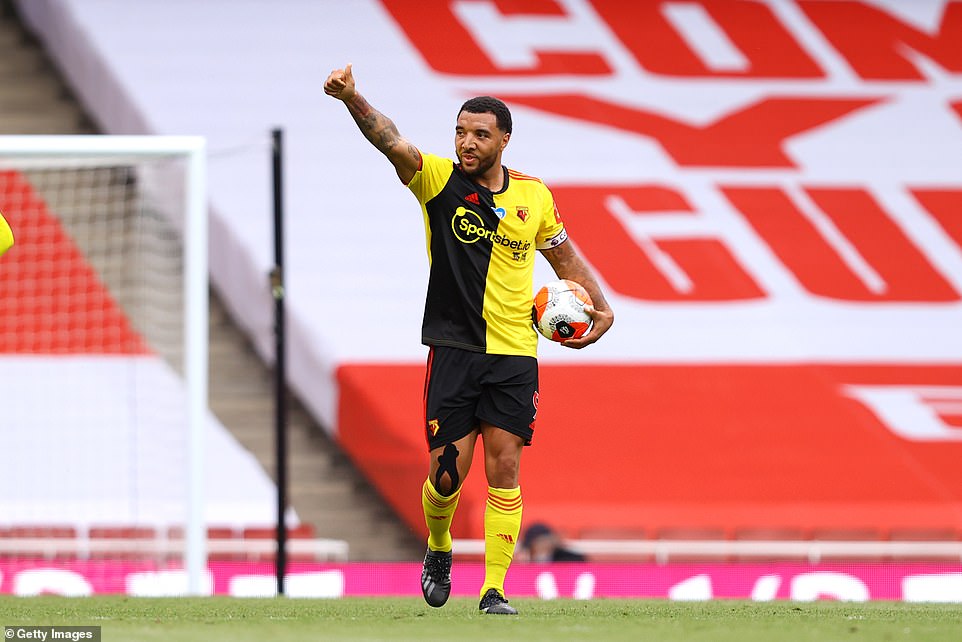 Watford were given a glimmer of hope when David Luiz fouled Danny Welbeck, and Deeney converted the resulting penalty

They might even hold Nigel Pearson responsible, despite his win ratio being better than any Watford manager in the Premier League era.

Under Pearson, Watford were the first team to beat champions Liverpool this season, and dared to believe they were safe when they beat Newcastle with three games remaining.

Then came a costly defeat at West Ham – after which Pearson became their third head coach to be fired since the start of the season – and another hammering at the hands of Manchester City.

Ultimately, they left themselves with too much to do. This defeat at Arsenal confirmed relegation and ended five years in the Premier League.

‘From top to bottom we have to do an audit and look at it. We can’t say we got it right because ultimately we failed. We have to appreciate that fans will be hurt, angry and annoyed. We have to take it with broad shoulders.’

Deeney revealed plans to consider his own future after a ‘clean-up’ knee operation next week.

‘I’m not saying that is my last game,’ said the 32-year-old. ‘But if it is, I’m happy I went out on my shield and gave everything I had.

Deeney once wound up Arsenal by claiming they lacked ‘cojones’ – or bottle – and this was a day when they served him with revenge.

Watford were behind inside five minutes. Craig Dawson’s clumsy challenge on Alex Lacazette was ruled as a foul by VAR Lee Mason, referee Mike Dean pointed to the spot and Pierre-Emerick Aubameyang made no mistake, sending Ben Foster the wrong way.

Kieran Tierney stretched Arsenal’s lead midway through the first half, with Aubameyang the creator, controlling a cross from Nicolas Pepe and rolling it towards Tierney who applied a tidy side-foot finish.

Nine minutes later and it was 3-0. Watford stood and watched as a long Tierney throw reached Aubameyang on the bounce. 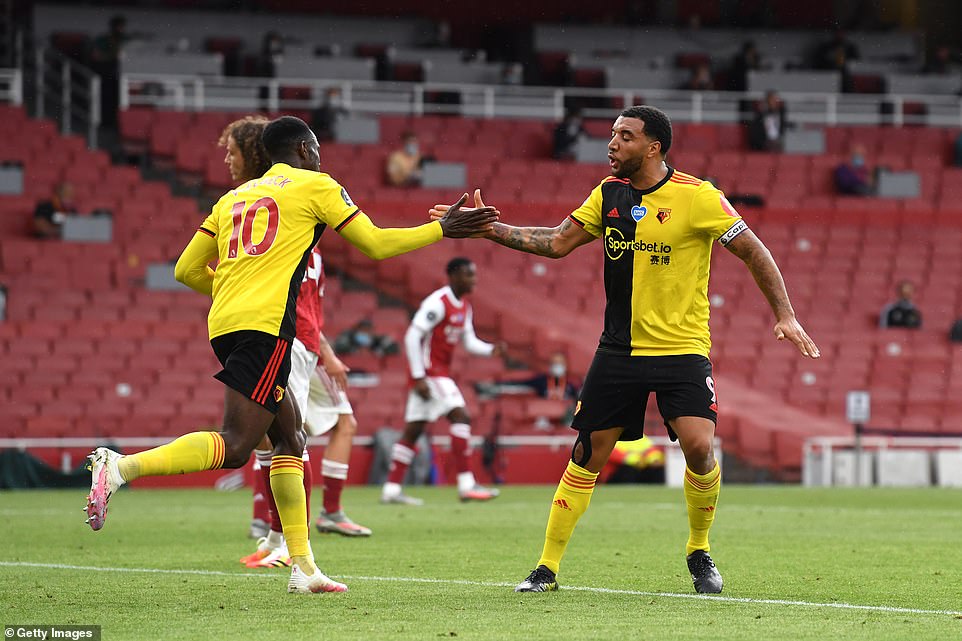 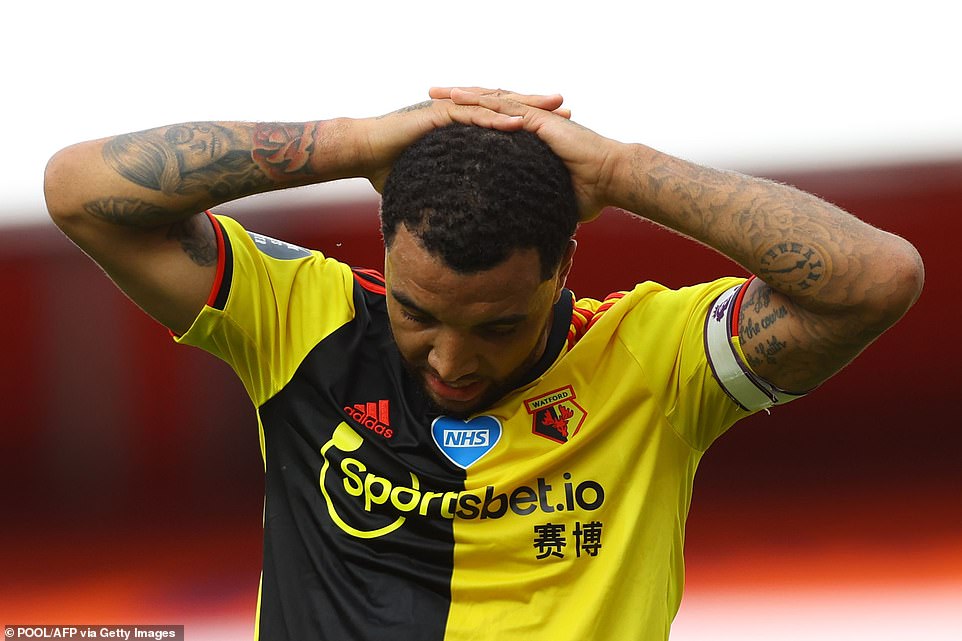 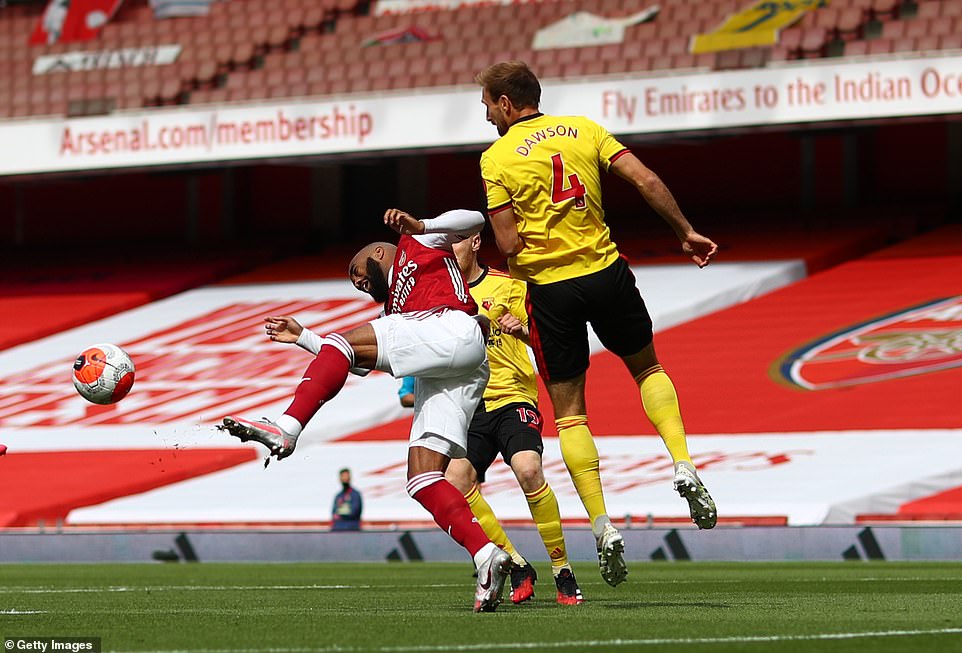 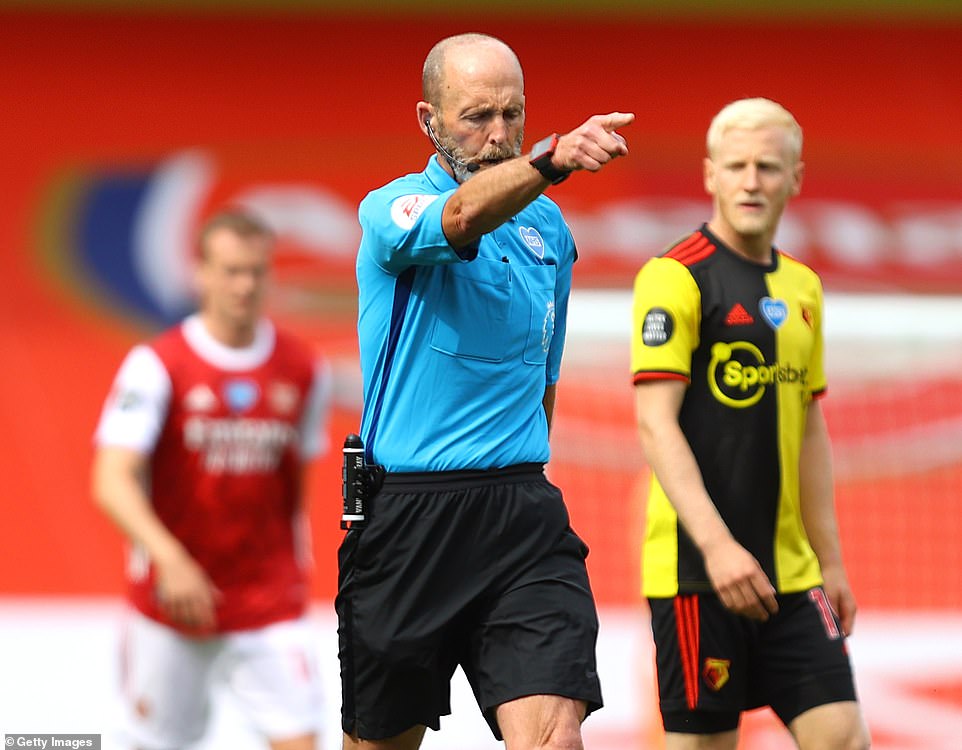 With Dawson behind him, the Arsenal captain produced an acrobatic over-head volley and moved his personal account onto 22 goals for the Premier League campaign.

Watford pulled one back before half-time. Referee Dean penalised David Luiz for a foul on Danny Welbeck and Deeney stepped up to smash the spot-kick past goalkeeper Emi Martinez.

Welbeck made it 3-2 against his former club, converting a low cross from Ismaila Sarr at the near post, and was denied an equaliser by another fine save from Martinez, who has impressed in the absence of Bernd Leno. 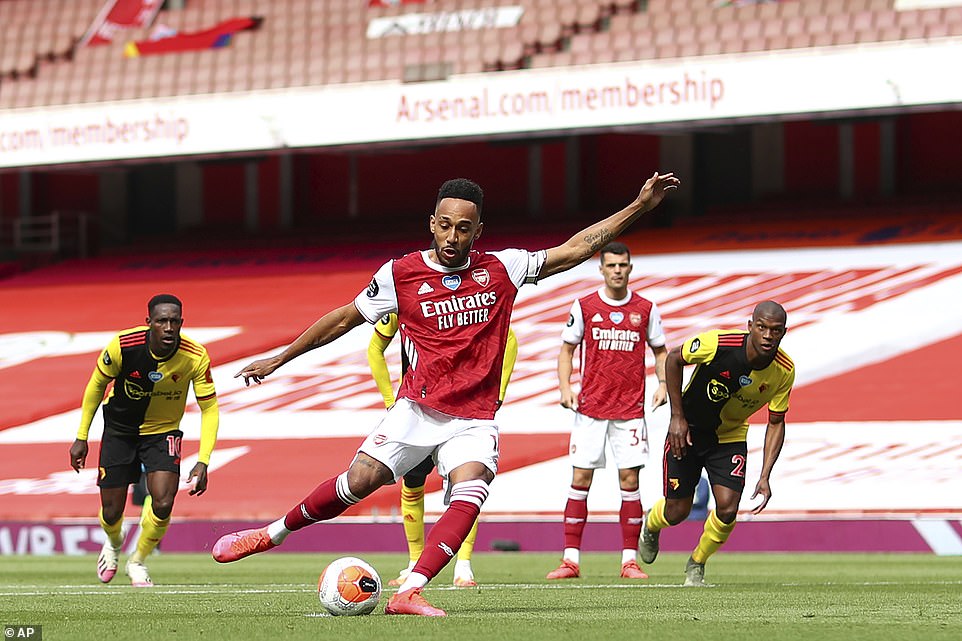 Aubameyang made no mistake from the spot, tucking away the resulting penalty to put them ahead 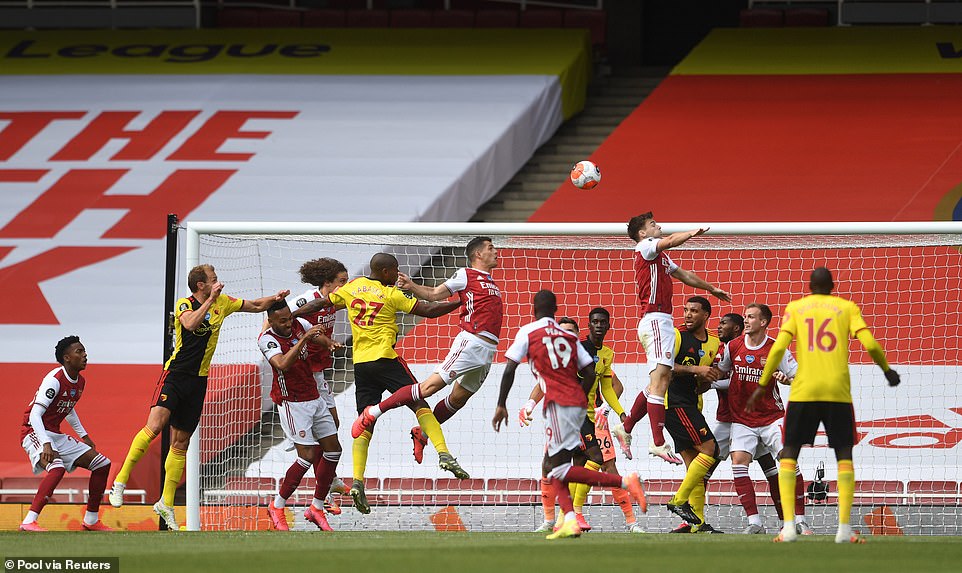 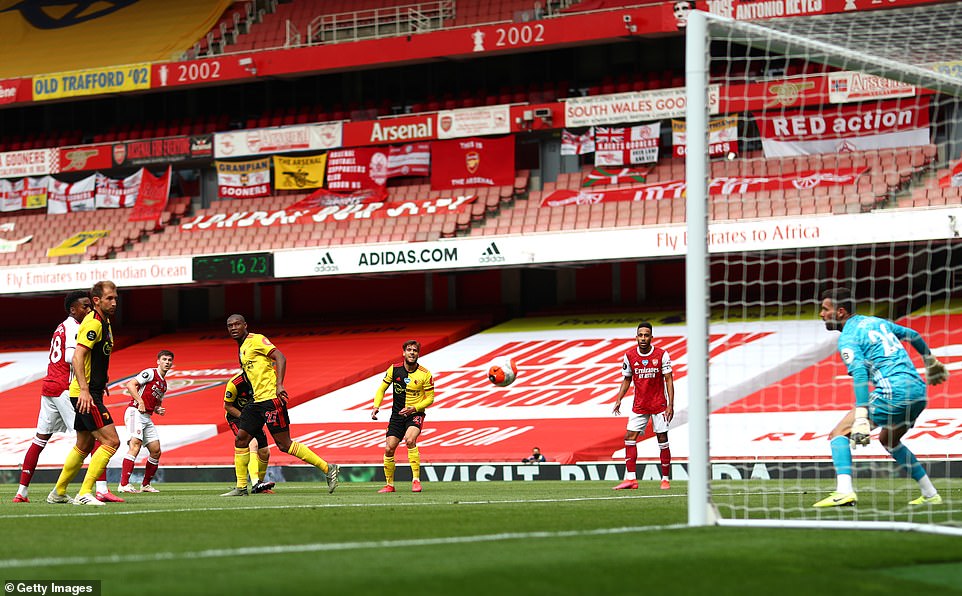 But it was the Gunners who scored next after Aubameyang laid the ball into Tierney, whose shot was deflected into the corner 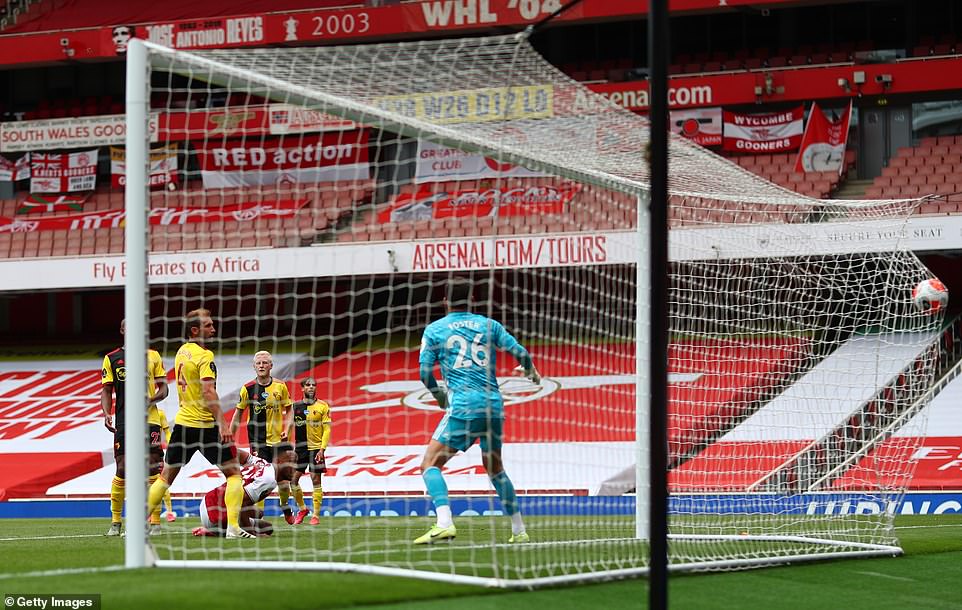 Arteta said Martinez will be in goal for the FA Cup final on Saturday but centre-half Shkodran Mustafi will miss the start of next season after scans revealed a hamstring tendon torn from the bone. ‘That’s normally a lot of weeks,’ said Arteta.

For Arsenal, three points lifted them to eighth, their lowest league finish for 25 years and seven wins down on last season, which is not a lot to celebrate but the FA Cup final awaits.

One last shot at glory and a place in the Europa League. For Watford, the sober reality of a return to the Championship and the search for yet another manager. 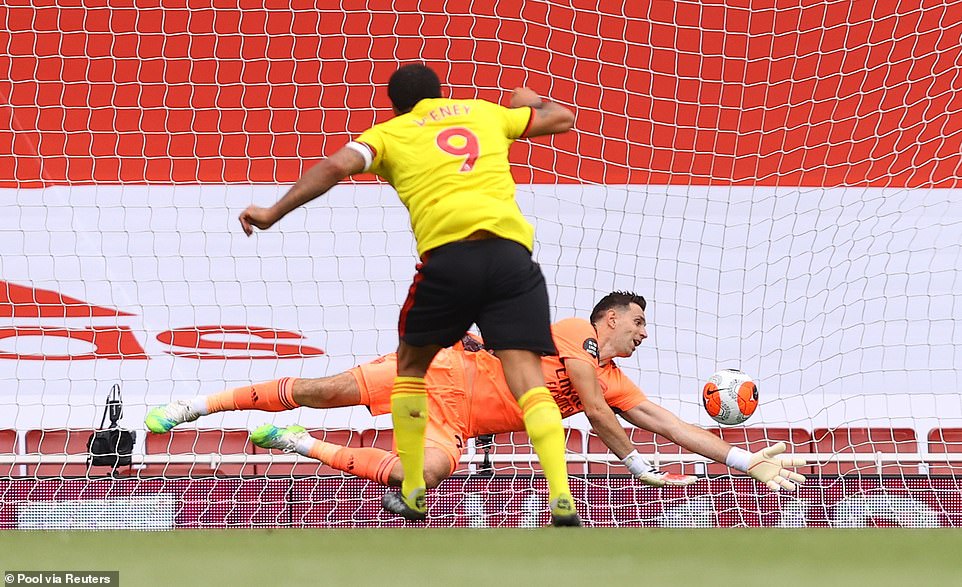 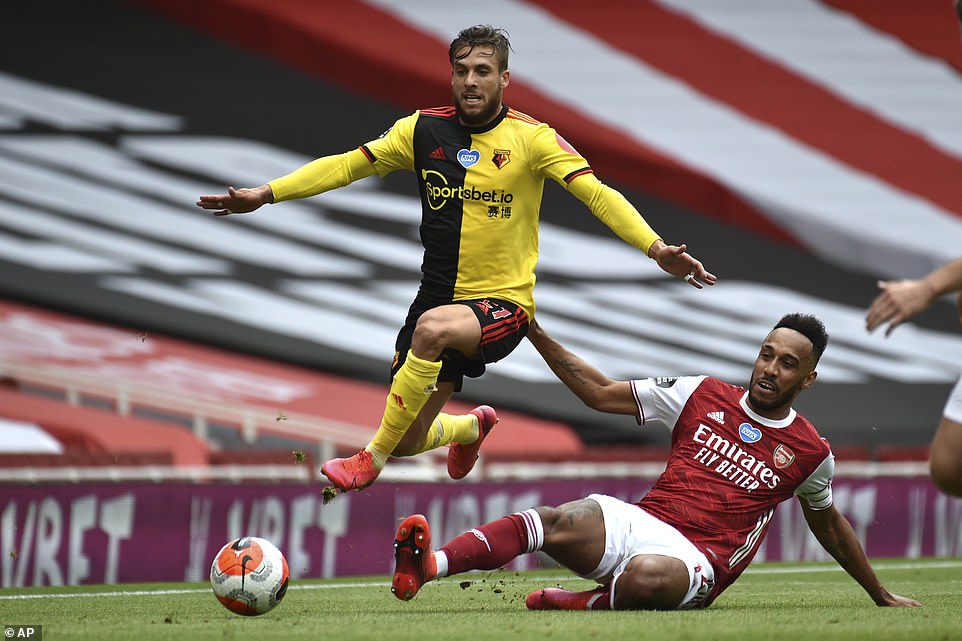 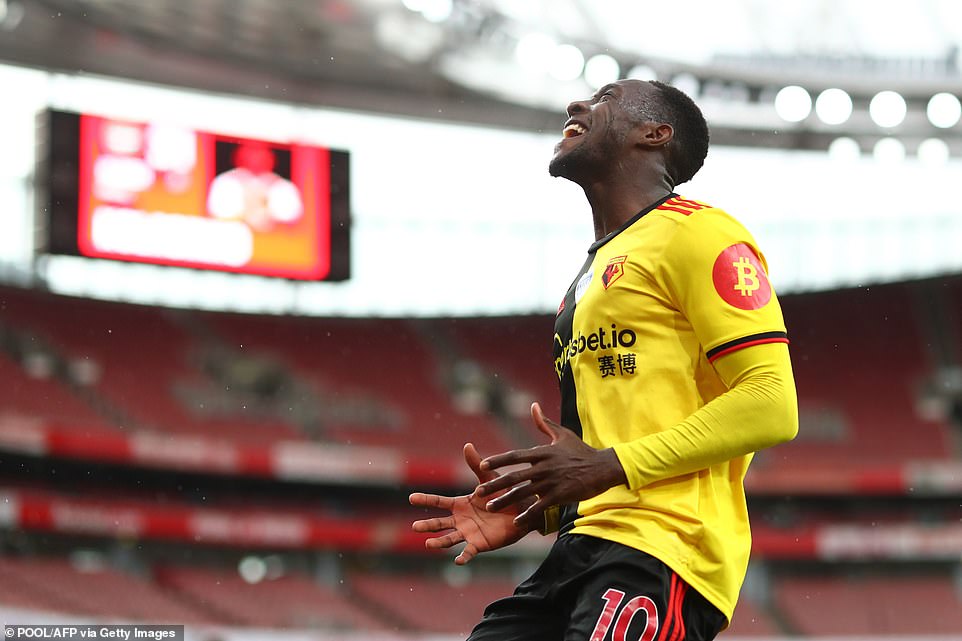 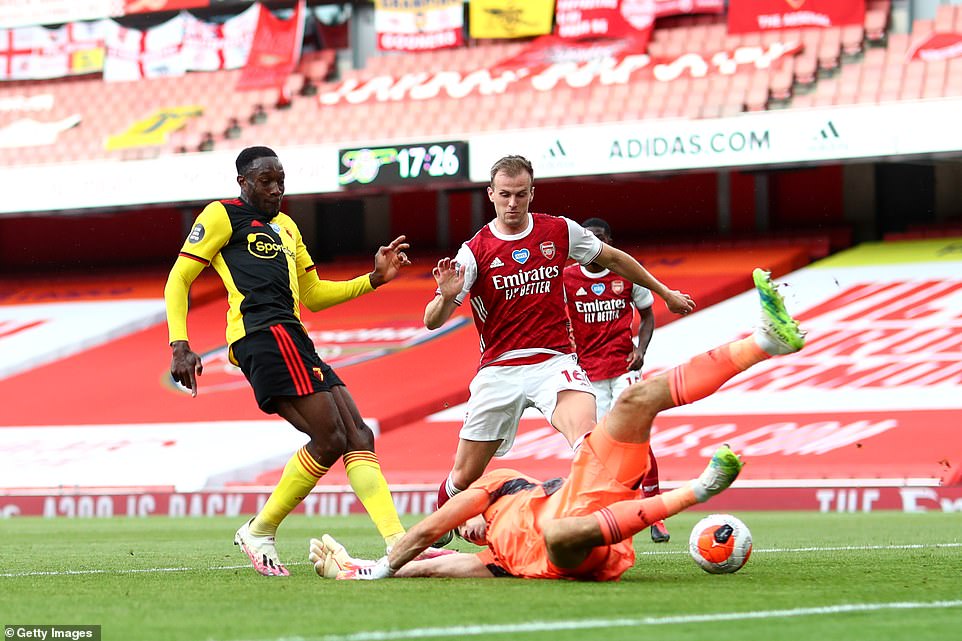