A SpaceX Falcon 9 rocket blasted off from Florida on Wednesday carrying a Luxembourg-made communications satellite.

The satellite is designed to expand NATO‘s surveillance reach and its capability to deter cyber attacks on alliance members.

The rocket’s reusable main-stage wasn’t expected to land or be retrievable, since the SES satellite had to be carried to a higher Earth orbit, leaving the booster without sufficient fuel to fly back to Earth for a return landing.

However, in an astonishing scientific feat, billionaire tech mogul Elon Musk said it had been discovered offshore not long after the launch. 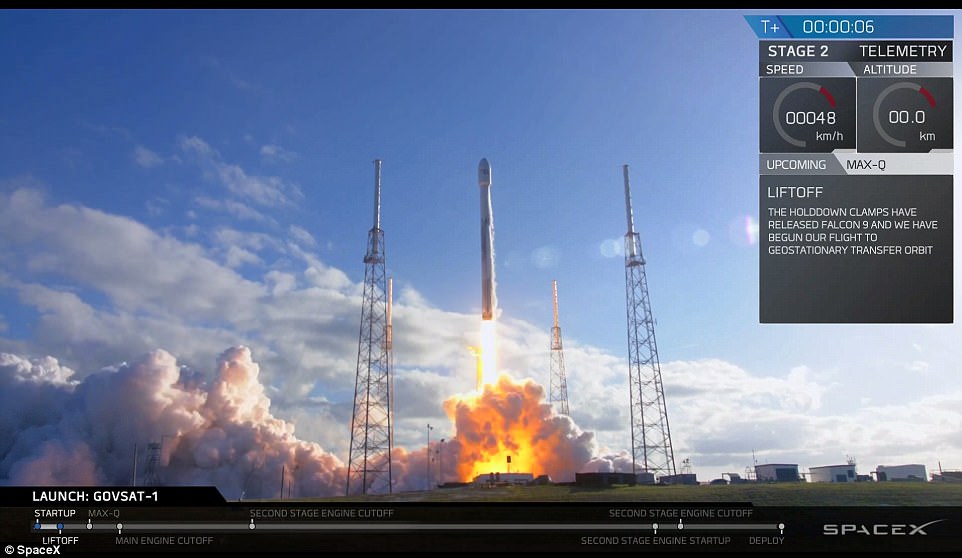 In another historic achievement for spaceflight, billionaire tech mogul Elon Musk’s SpaceX successfully launched a Falcon 9 rocket, equipped with a recycled first stage booster. After a series of delays, the firm’s Gov-Sat1 mission went off without a hitch on Wednesday. The rocket blasted off from the Cape Canaveral launchpad

‘This rocket was meant to test very high retrothrust landing in water so it didn’t hurt the droneship, but amazingly it has survived,’ Musk said in tweet late Wednesday.

‘We will try to tow it back to shore,’ Musk, who is also CEO of electric car firm Tesla, added.

Originally, SpaceX had backed off from the GovSat-1 mission due to some technical issues.

Musk’s SpaceX tweeted on Tuesday that it would ‘stand down’ from launching the Falcon 9 rocket as it worked to replace a faulty second stage sensor. 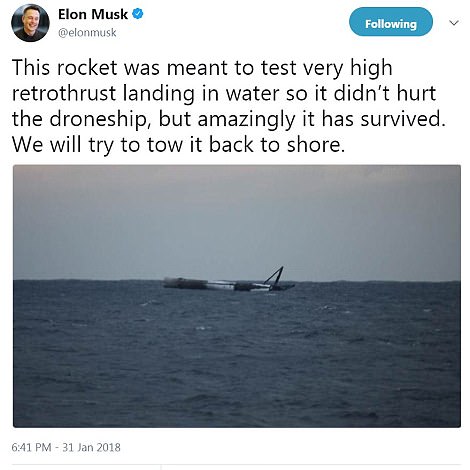 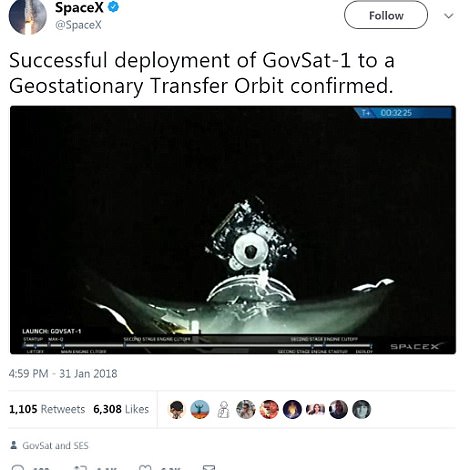 The recycled Falcon 9 rocket wasn’t expected return to SpaceX’s launch pad. However, tech mogul Elon Musk tweeted late Wednesday night that the rocket had ‘amazingly’ survived. Meanwhile, the Luxembourg-made satellite has made it into orbit

It comes a week before the California-based company is slated to conduct its highly anticipated first test flight of the much larger and more powerful Falcon Heavy rocket.

The Falcon Heavy megarocket packs three times the thrust of the Falcon 9. 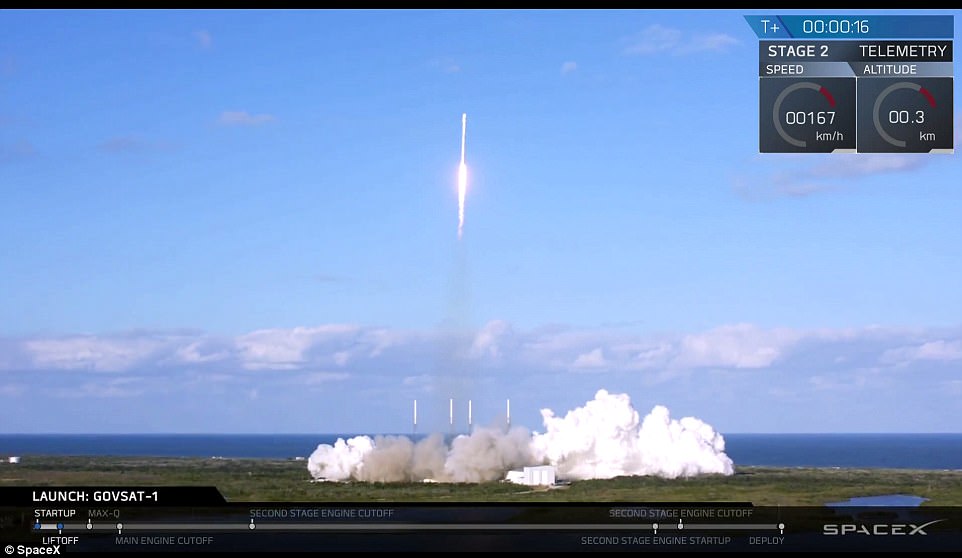 The Falcon 9 sent up a satellite that will provide secure communications for the government of Luxembourg.  The satellite will provide greater cyber protection for Luxembourg’s EU partners and NATO allies

The LuxGovSat S.S. is a public-private joint venture between the Luxembourg government and Luxembourg-based telecommunications company SES, in part to fulfill that nation’s growing defense obligations to NATO.

SpaceX made history in March when it achieved the first-ever reuse of an orbital-class booster, which CEO Elon Musk had deemed ‘a huge revolution for spaceflight.’

Reusable rockets would cut costs and waste in the space industry, which currently loses millions of dollars in jettisoned machinery after each launch.

Russia, Japan and the European Space Agency are developing similar technology and are in testing stages.

Jeff Bezos, the founder of Amazon.com and owner of The Washington Post newspaper, said in February that his private space firm Blue Origin expects to begin crewed test flights of the New Shepard, the company’s flagship rocket, next year and begin flying paying passengers as early as 2018.

The Indian space agency also hopes to develop its own frugal shuttle, as it seeks to cash in on a huge and lucrative demand from other countries to send up their satellites, after a successful test launch in February.

The firm livestreamed Wednesday’s Falcon 9 launch on its YouTube channel. Up next is the long-awaited launch of its Falcon Heavy megarocket, which is currently slated for February 6

A spokesman for Schneider said the $279 million satellite is part of a broader policy of doubling the country’s contributions to NATO.

Citing new security threats, a senior NATO official told Reuters in March that the alliance planned to spend more than $3 billion on defense technology, a third of which would go toward satellite communications.

The same Falcon 9 booster was used last year in a mission to launch a top-secret payload into space for the U.S. government.

What to shop in the sales, that will still be relevant in 2019