Few things are more frustrating to pedestrians than the treacherous, knee-deep snow banks and slush puddles left behind from a major blizzard.

But experts say the icy inconveniences can actually reveal how urban designers may be able to make our lives safer and easier.


When cars travel through snowy streets, their paths reveal parts of the road that the vehicle doesn’t drive over.

Those untouched snow mounds may range in size and location, but they’re typically located in the middle of intersections or inches away from the sidewalk. 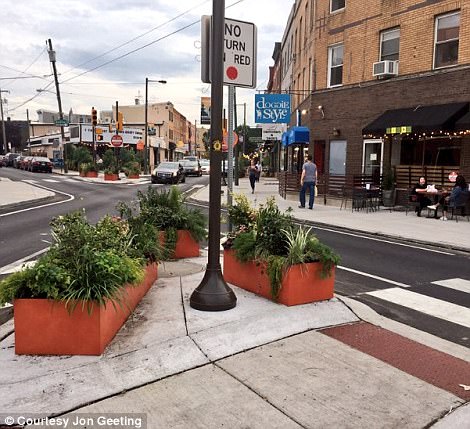 The phenomenon is now being referred to as ‘sneckdowns,’ which is a combination of the words ‘snow’ and ‘neckdowns.’

A neckdown, or a curb extension, is commonly used by urban planners as a traffic calming measure, making it easier for pedestrians to cross the street and for cars to navigate roads more safely and slowly.

Philadelphia activist Jon Geeting and other empowered city dwellers across the country have documented sneckdowns and used them to push for changes in city planning, such as reshaping intersections, according to 99percentinvisible.

Geeting walked around his neighborhood after some snowfall to find out where pedestrian plazas, traffic islands and curb bumpouts were needed most.

‘To my delight, the snow revealed some awesome traffic calming ideas I hadn’t considered,’ Geeting wrote in a post on his blog, this old city.

Geeting’s photos of sneckdowns were used in a Philadelphia campaign to re-design some city streets and helped to improve an intersection in the city’s East Passyunk neighborhood, according to PlanPhilly. 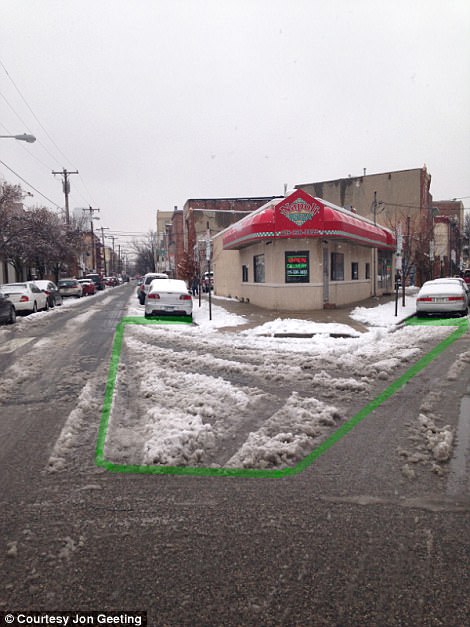 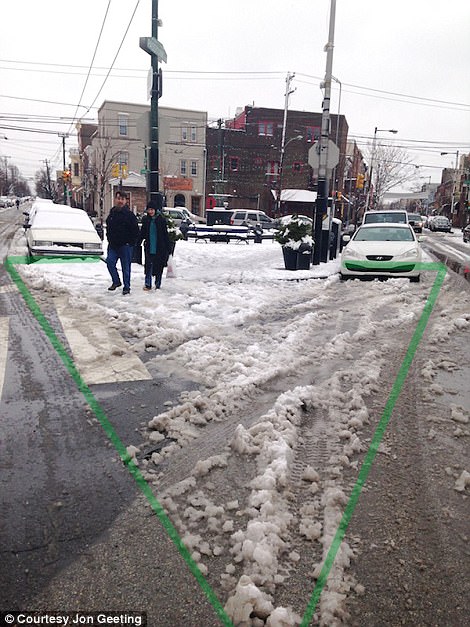 Pictured, Geeting discovered a sneckdown that revealed that an intersection could benefit from a curb bump-out. The bump-out wouldn’t ‘take away any parking spaces from motorists,’ Geeting wrote in a blog post

Coined by an activist in 2011, ‘sneckdowns’ are created when cars travel through snowy streets and there are untouched snow mounds left behind.

Sneckdown is a portmanteau of the words ‘snow’ and ‘neckdown’.

A neckdown, or a curb extension, is commonly used by urban planners as a traffic calming measure, making it easier for pedestrians to cross the street and for cars to navigate roads more safely and slowly.

Activists have been photographic sneckdowns to notify local officials of where sidewalk extensions, pedestrian parks or curb bumpouts are needed.

In some cases, officials have used images of sneckdowns to redesign city streets and intersections.

Sneckdowns create streets that are pedestrian friendly, by making it easier for them to cross the street.

The curb extenders also force cars to slow down. 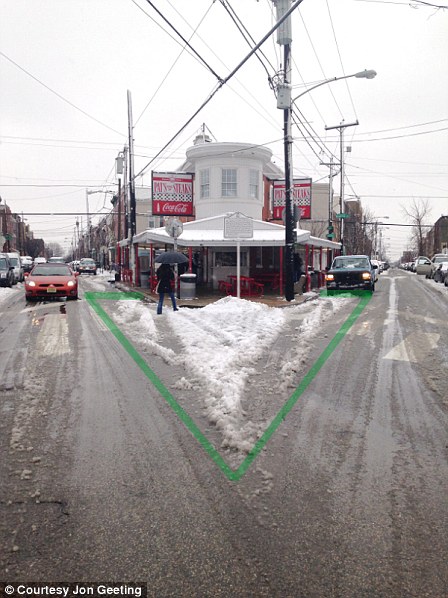 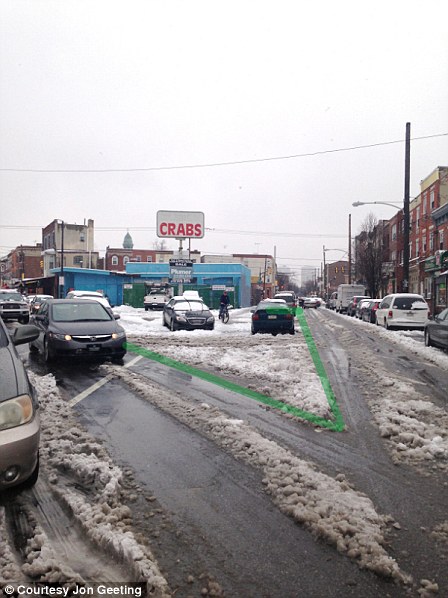 Geeting walked around his South Philly neighborhood to spot sneckdowns. Pictured, he said these two intersections could benefit from curb extensions that would benefit pedestrians by forcing drivers to slow down and be more mindful of people crossing the street

A local neighborhood organization, the Passyunk Avenue Revitalization Corp., used the photos to develop a mock-up of proposed design changes to the South Philadelphia intersection.

That mock-up was supplied to Philadelphia’s Streets Department, who decided to build a pedestrian plaza in the area where the sneckdown was first spotted by Geeting.

Geeting wasn’t the first to coin the term sneckdown, however. 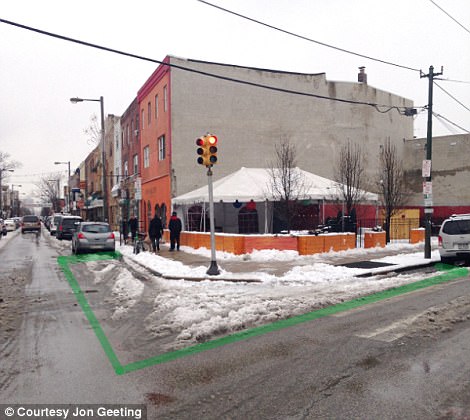 Urban activists were spotting sneckdowns in 2011, believing that the untouched snow mounds could be used to design safer streets.

In the snow, it’s easy to see how much room cars require for turning, which may indicate how much space is needed for parking, pedestrians or bike lanes.

Additionally, when snow is plowed, it makes roads more narrow, which means vehicles are forced to slow down.

Neckdowns extend the sidewalk further into the street, making them a permanent solution for slowing down traffic and, thus, creating a safer environment for pedestrians.

Sneckdowns began to really take off in 2014, when a hashtag starting trending on Twitter.

The phenomenon started to become a grassroots or guerrilla activism approach, in that average citizens could push for safer streets by documenting cars’ traffic patterns and supplying them to local officials.

Experts point out that unlike other processes, it doesn’t require an expensive study or tax dollars to discover where city planning needs to be updated to become more pedestrian friendly.

Activist Clarence Eckerson developed the term sneckdown and has documented the phenomenon via dozens of videos on his Vimeo account, Streetfilms. 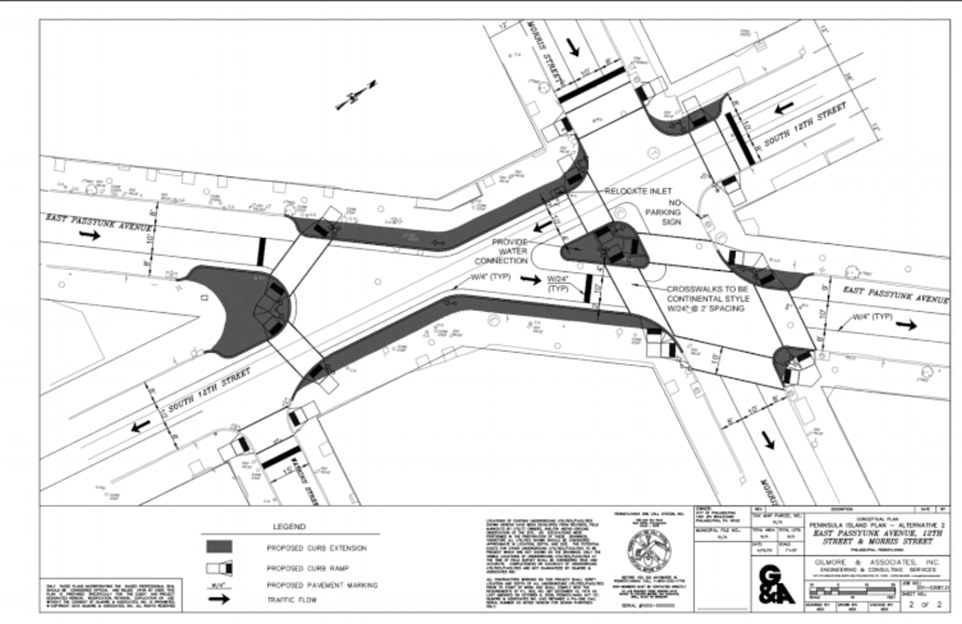 Eckerson documented sneckdowns that were created in 2017 after New York City was hit by winter storm Stella.

He also collected images of sneckdowns after winter storm Grayson barreled through NYC.

As Geeting points out, not all cities get snow, so if concerned residents want to advocate for new pedestrian parks and curb extensions, they may have other options.

‘A lot of people wrote to inform me that flour or other kinds of powder are a common way for street engineers to test where curb lines should be,’ Geeting told 99percentinvisible.

‘Even in places where there is no citizen-led option, making [temporary and reversible] changes to streets illicitly can be a good way for citizens to call attention to problems that a city administration may not be aware of, or may be ignoring,’ Geeting explained.

Acupuncture can boost your chances of getting pregnant

Withings releases first smartwatch after buying itself back from Nokia

Oprah teams up with Apple to make shows, possibly for video...