Parents fear their children will be cyberbullied via WhatsApp group chats, survey shows

By Victoria Bell For Mailonline

A shocking 62 per cent of UK parents are worried that their child is being cyber bullied in group chats via WhatsApp, according to a new survey.

Eight out of ten parents expressed concern about the nature of closed group chats, used on platforms such as WhatsApp.

The survey of more than 2,000 parents was conducted by child online safety organisation Internet Matters.

Parents were concerned that the nature of a closed group is that they do not know what the content of the conversation is and how it affects their child.

Mothers and fathers of children aged 11 to 13 proved to be the most concerned overall.

A recent survey shows that eight out of ten parents expressed concern about the nature of closed group chats used on platforms such as WhatsApp. It found that 62 per cent of parents worry their children will not open up about harmful issues they face online

‘Group chat can often be a source of upset for kids – from one child posting a picture that makes someone feel excluded to another not being included in a group at all,’ warned psychologist Dr Linda Papadopoulos.

‘But group chats also have the power to stop kids feeling isolated as it can give them an opportunity to stamp out poor conduct and stand up for one another.’

The findings showed that 62 per cent of parents worried that their child will not open up about issues they face online.

‘Online groups are one of the most common ways children communicate with each other – whether that be a group that includes their whole class or a few select friends,’ said Internet Matters chief executive Carolyn Bunting.

‘Crucially, group chats are not public, which makes it challenging to parents to know what’s going on.’

The organisation has released the findings to mark Stop Speak Support Day, an anti-bullying initiative set up by the Duke of Cambridge during Anti-Bullying Week.

Today, the Prince gave a speech in which he accused tech giants of ‘being on the back foot’ when it comes to cyberbullying.

He said much of the widespread optimism when the internet first became a staple of life over a decade ago has given way to concern and fear. 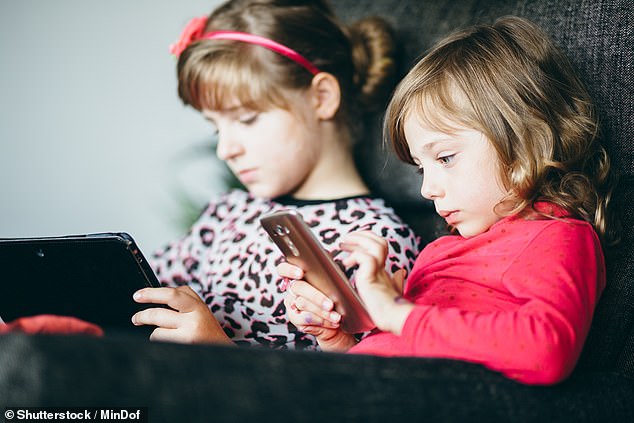 Parents were concerned that the nature of a closed group is that they do not know what the content of the conversation is and how it affects their child. Mothers and fathers of children aged 11 to 13 proved to be the most concerned overall (stock image)

Meanwhile, the Government is currently considering whether to enforce legislation on social networks to protect young people.

Margot James, Minister for Digital, Culture and Media said recently that she is considering a deadline to speed up the removal of harmful content on social media.

James said that she would also tackle the issue of teenagers watching pornography online.

HOW CAN PARENTS PROTECT THEIR CHILDREN ONLINE?

These common topics of conversation often reveal key information about a child, including: name, age/date of birth, school name and even their appearance.

Whilst it may be very difficult to protect the privacy of children in the digital age, there are some things that can be done to shelter children from online dangers.

It is amazing how many parents leave on their Instagram location settings. Set your location settings to off if you do not want people to be able to figure out where you and your children live.

Ask yourself if all the people you’re sharing your photos with really want to see them and will they protect them in a way you would.

Private social networks offer a secure way to share the pictures of your children with your family and friends.

Ultimately the only way to be 100 per cent sure that you don’t have a digital footprint is not to have any digital photos taken but this isn’t a road the vast majority of people want to go down.

GlobalNewsEveryday - January 27, 2021
27
Ghanaian news presenter reading the football results and it is amazing. . The world's best football. All in one place. Get free access to...

Coronavirus: Will Covid-19 speed up the use of robots to replace...