A young brown bear became a social media sensation in 2019 when it approached a snowboarder at a California ski resort, but the fearless behavior also sparked an investigation among scientist.

The cub was analyzed by wildlife officials who determined its dog-like behavior was due to a lethal disease that caused its brain to become dangerously inflamed.


The disease, known as encephalitis, has been documented since 2014 but has recently become a growing concern among young bears living in California.

Veterinarians said in the past 12 months, officials have captured four bears with encephalitis, which can be caused by a body’s immune system attacking itself.

Most of the bears exhibited head tremors, lethargy, low weight and a subtle head tilt, but officials say the virus does not pose a threat to humans. 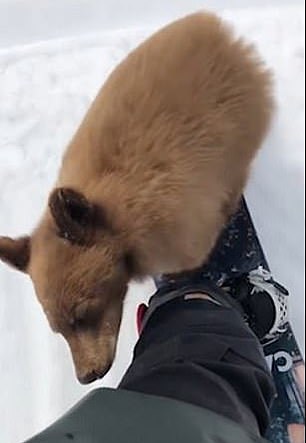 A young brown bear became a social media sensation in 2019 when it approached a snowboarder at a California ski resort, but the fearless behavior also sparked an investigation among scientist

The bear roaming the slopes of Northstar ski resort was captured on film by a snowboarder, showing the cub exhibited a prominent head tilt as it climbed onto snowboards and sniffed skiers.

When officials took the bear into custody the bear, they feared it would have to be put down because it could pose a threat when it gets older.

However, the bear, now named Benji, was treated for the disease and is now living a healthy life at the San Diego Humane Society’s Ramona Campus.

The Nevada Department of Wildlife was the first to raise a red flag about bizarre behavior in 2014, alerting wildlife colleagues in California to growing encounters in the Tahoe Basin with young black bears with neurological abnormalities, Environmental News Service reports.

Veterinarians and biologists from the two state wildlife agencies met virtually again in March to share updates on the situation.

Necropsies on the afflicted bears have confirmed encephalitis but the root cause of the disease remains a mystery.

It is a disease that may occur in the young bears by the immune system attacking itself.

Encephalitis is found to dangerously inflame the brain

Other symptoms include head tumors, lethargy, a tilted head and malnutrition.

Four bears have been caught in California the last four months  that have been diagnosed with encephalitis.

During their investigations into the cause, scientists have discovered five novel viruses, previously unknown and unidentified, though their relationship to the condition and the neurological disorders remain unknown.

The most recent report was that of a small, black bear that wondered onto a utility worksite in Pollock Pines.

The 21-pound female cub was alone and possibly sick, as it appeared lethargic and showed little fear of people.

Calls to the California Department of Fish and Wildlife (CDFW) reported the bear had moved into a residential backyard in the heavily timbered mountain region.

However, residence dismissed CDFW guidelines for encounters with wild animal and fed the seemingly friendly bear apples and strawberries.

The bear became so comfortable that it jumped into a housekeeper’s open car trunk, which led bystanders to approach the furry animal and pet it.

The bear, which should have weighed close to 80 pounds for its age, was covered in ticks when it was eventually captured and taken to the Department of Fish and Wildlife’s wildlife investigation lab.

A week of observation and testing confirmed neurologic and behavioral deficits and the bear was euthanized.

Researcher conducted a post-mortem examination, finding it suffered from encephalitis.

A fourth bear with signs of neurological abnormalities was spotted in Humboldt County, but was euthanized and also found to have encephalitis. 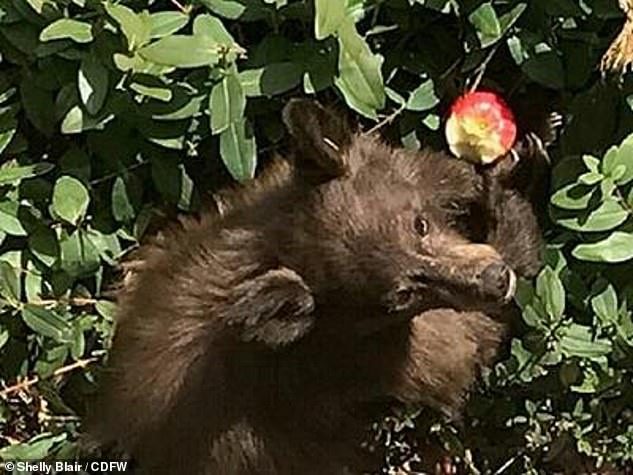 The most recent report (pictured) was that of a small, black bear that wondered onto a utility worksite in Pollock Pines. The 21-pound female cub was alone and possibly sick, as it appeared lethargic and showed little fear of people.

Brandon Munk, a CDFW wildlife veterinarian, explained: ‘Any time a wild animal comes into our care, the best possible outcome is a release back to the wild.

‘That’s just not possible for these neurologically impaired bears. At this point, we don’t know what causes the encephalitis so we don’t know what, if any, health risks these bears might pose to other animals.

‘The second-best outcome would be a long, healthy life at a reputable zoo or wildlife sanctuary, but any inflammation of the brain is going to be significant for the individual bear and may have long-term consequences.

‘The few bears like this we have placed do not seem to fully recover, some requiring significant medical management for the life of the bear, which is a huge burden for these facilities that often operate on tight budgets.

‘So neither release back to the wild nor placement in a facility is a good option for these bears,’ he said.

6 practical reasons to use incognito mode in your browser