By Cheyenne Macdonald For Dailymail.com

It’s a common claim among marijuana enthusiasts that the plant can boost sexual arousal and even lead to more powerful orgasms.

And now, there’s research to back it up.

A new study that analyzed reports from hundreds of women, both pot smokers and non-smokers, has found that marijuana use prior to sex doubles the chances of having a more satisfying orgasm.

Researchers found significant differences in the participants’ reported sexual experiences depending on whether they used marijuana beforehand or not. These differences translate to 2.13 higher odds of reporting ‘satisfactory orgasms’ for women who smoke pot. Stock image

THE DIFFERENCES BETWEEN THC AND CBD

Tetrahydrocannabinol (THC) and cannabidiol (CBD) are both derived from the cannabis plant.

Together, they are part of the cannabinoid group of compounds found in hashish, hash oil, and most strains of marijuana.

THC is the psychoactive compound responsible for the euphoric, ‘high’ feeling often associated with marijuana.

THC interacts with CB1 receptors in the central nervous system and brain and creates the sensations of euphoria and anxiety.

CBD does not fit these receptors well, and actually decreases the effects of THC, and is not psychoactive.

CBD is thought to help reduce anxiety and inflammation.

Exactly why marijuana seems to improve the sexual experience is still somewhat of a mystery. But over the years, scientists have come up with several possible explanations.

‘It has been postulated that it leads to improvement in sexual function simply by lowering stress and anxiety,’ researchers explain in the new paper, published to the journal Sexual Medicine.

‘It may slow the temporal perception of time and prolong the feelings of pleasurable sensations. It may lower sexual inhibitions and increase confidence and a willingness to experiment.

‘Marijuana is also known to heighten sensations such as touch, smell, sight, taste, and hearing.’

The study led by a team at the Saint Louis University School of Medicine reviewed self-reported survey responses from 373 women.

About 47 percent of the participants indicated that they were marijuana smokers, and of this group, 34 percent noted that they used it before sex.

To find out how pot use factors into sexual satisfaction, the researchers developed a Sexual Health Survey addressing a broad variety of topics, including sex drive, lubrication, and the presence of sex-related pain.

‘To limit bias, the authors embedded the questions about marijuana deeper into the questionnaire,’ the paper notes.

In reviewing the data, the researchers found significant differences in the participants’ reported sexual experiences depending on whether they used marijuana beforehand or not. 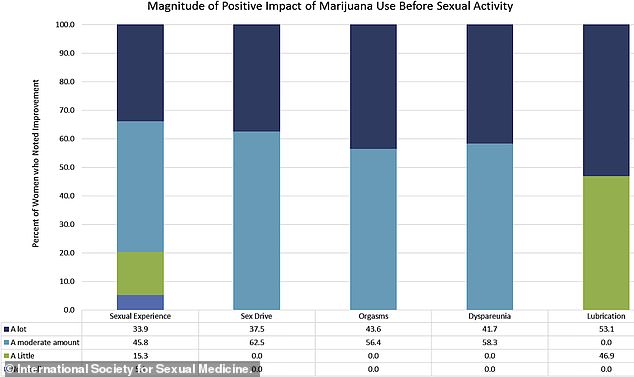 A new study that analyzed reports from hundreds of women, both pot smokers and non-smokers, has found that marijuana use prior to sex doubles the chances of having a more satisfying orgasm. Their findings are charted in the graph above

‘Most women reported increases in sex drive, improvement in orgasm, decrease in pain, but no change in lubrication,’ the researchers wrote.

These differences translate to 2.13 higher odds of reporting ‘satisfactory orgasms’ for women who smoke pot.

‘Marijuana appears to improve satisfaction with orgasm,’ the team concluded.

‘Our study is consistent with past studies of the effects of marijuana on sexual behaviour in women.’

Coronavirus elderly advice: How can I look after my older relatives?

Steam status: Is Steam down right now? Is the Steam Store not working? |...

GlobalNewsEveryday - January 21, 2021
0
The Government has set out its plans to reform post-16 education and training in England. New powers could be introduced to...

Steam status: Is Steam down right now? Is the Steam Store...

Welsh police force is first in UK to use virtual reality...