It can be difficult to make the perfect cup of coffee, and scientists have now found a way to make each brew as good as the last.

The key, they claim, lies in using hot water and not boiling water


Scroll down for video

Scientists have now found a way to make each brew as good as the last. The key, they claim, lies in using hot water and not boiling water (stock0

Seven highly trained tasters from the Centre for Sensory Analysis and Consumer Behaviour at Kansas State University sipped various temperatures of coffee made from Arabica beans, Robusta beans or a combination of both.

The researchers also only used purified water to keep out any external tastes.

Panellists also breathed through a moistened warm, clean cloth between tastings to keep their nasal passages clear as to not obstruct the low scents and aromas from the hot beverage.

They marked each cup, like wine tasting, according to industry-wide descriptions such as nutty, smoky, floral, musty and others that help rate the quality of what they are drinking.

According to their research, published in the specialist journal Food Research International, the best temperature overall was 70°C (158°F), particularly for those who like their coffee strong.

Robusta beans, which are higher in caffeine, were significantly more intense and better tasting at this temperature than 60°C (140°F) or 50°C (122°F).

HOW CAN YOU MAKE THE PERFECT CUP OF COFFEE EVERY TIME?

An assistant chemistry professor of chemistry from the University of Oregon called Dr Christopher Hendon used science to find out how to make the perfect cup of coffee every time.

Known as ‘Dr Coffee’ in certain social circles, the caffeine-loving scholar looked at how certain things can affect the taste of coffee.

He found that hardness of water is related to better taste, the harder the water the stronger the taste.

Hard water is created by the presence of magnesium and calcium.

These impurities help caffeine adhere better, which improves the taste and quality of the drink.

2. Store the coffee beans in the fridge

The research also revealed that the storage of coffee beans was very important for taste.

As this evaporates, so does most of the flavour.

The type of grinder used is also important, as if the beans are ground up too finely they can clump together, detracting from the flavour.

A powder is desirable as it increases surface area, which in theory creates more flavour.

This is a fine balance however, as ground too fine the coffee will become clumpy – detracting from the overall experience.

4. Mix the coffee and the water evenly

The final key to a good cup of coffee is the way the hot water mixes with the coffee.

This process should be consistent and steady for maximum taste.

Arabica beans, used in most coffee chains, were better at 70° (158°F) but the difference was less profound.

Researchers say that tastes vary but that their tests were based on scientific evaluations of intensity rather than personal preferences.

‘The coffee samples consumed at 70°C (158°F) had higher intensities for most of the key coffee attributes’, researchers wrote. 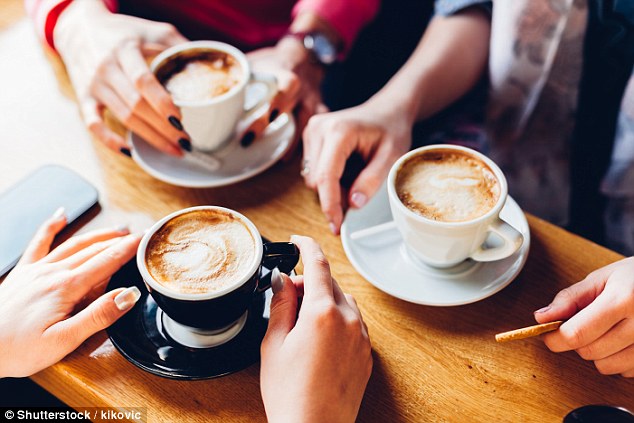 ‘However, our findings suggest that these differences may be dependent on the coffee, which may be why the range of suggested temperatures is so broad.

Scientists found that drinking coffee any hotter than the recommended 70°C (158°F) is not recommended because there is a higher chance of scalding burn injuries.

‘Maintaining the temperature over testing by providing insulated containers, warming trays, and additional samples as needed is essential because this study shows that changes in temperature affect sensory properties’, the researchers wrote.

WHAT ARE THE BENEFITS OF DRINKING COFFEE?

Caffeine has been deemed safe for consumption in doses of up to 400 mg per day for the general population.

Studies suggest it can have a variety of health benefits, including combating liver disease and type two diabetes.

Research has even suggested it could even help people live longer.

It is the world’s most widely consumed stimulant and reports show it can boost daily energy expenditure by around five per cent.

Researchers have said combining two to four daily coffees with regular exercise would be even more effective at keeping the weight off.

A 2015 study showed just a couple of cups a day could help millions of dieters stay trim once they have achieved their desired weight.

Amazon tweaks app icon after comparisons made to Hitler