A Canadian tinkerer who calls himself a ‘mad inventor’ ditched his corporate job to follow his dream of ‘putting a little more joy into the world’ with eye-catching vehicles and contraptions.

Former advertising executive Allan Carver is still generating promotions for local businesses but they involve crazy creations — like a 13-foot remote-control metal dinosaur, an electric witches’ broom made from an old scooter, and a real-life Angry Birds video game — rather than radio or TV spots.


‘I want people to go ‘Wow!’ and walk away with a smile,’ Carver told DailyMail.com of his inventions.

‘I want them to feel better about themselves, about others, and about humanity in general.’

One of the most attention-garnering inventions to come from Carver’s Mad Secret Labs is a rideable TIE fighter, the starship flown by Darth Vader and imperial troops in the Star Wars movies.

The remote-controlled vehicle is about one-third the size of a real TIE fighter and can get up to six miles an hour.

Carver spent years toiling in creative departments of various ad agencies but eventually felt his industry wasn’t evolving as fast as technology and the marketplace.

‘Traditional advertising is “interruption”-based,’ he said. ‘That means ads interrupt the content you want to consume, show you a message, and then let you get back to the stuff you want to see/hear/experience.’

With streaming services and ad blockers, consumers can now control the messages they’re exposed to.

‘I decided to take the same messages and create things and experiences that people wanted to see and hear,’ he added. 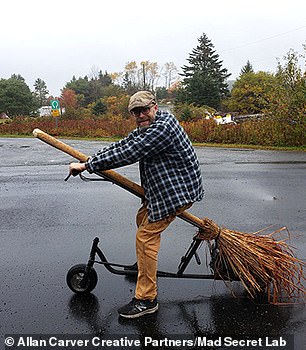 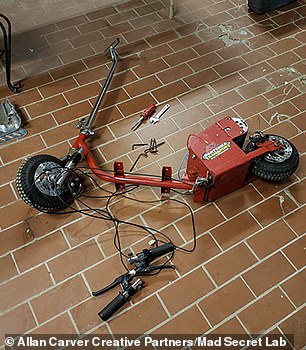 Allan Carver created this motorized witch’s broom to bring some Halloween spirit to the Spring Garden Road shopping district. He upcycled it from a junked scooter

Hired to promote a how-brew wine store called Noble Grape, for example, Carver eschewed a traditional ad campaign in favor of converting an electric bicycle into a giant wine-bottle-shaped mobile bar that pours red and white by the glass.

‘People want to see it. They want to take pictures and videos of it. And most importantly, they want to make posts about it and share it with their friends,’ he said. 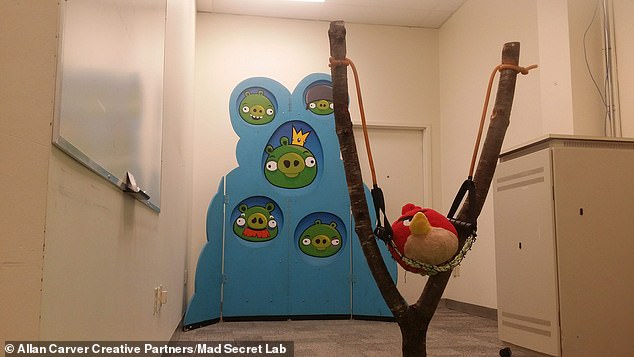 Carver is still focused on advertising, he just prefers to garner attention in the real world and letting spectators spread the word.

‘There’s so much negativity all around us,’ he said. ‘It’s more fulfilling to spread some positive vibes.’

To raise awareness about parking options in Halifax’s Spring Garden Road shopping district, Carver built a miniature electric VW Bus and took it out for a spin.

‘Every time we take out our mini VW Bus, people want to see it—they ask questions, they ask to take selfies with it,’ he explained. ‘It puts a smile on everyone’s face. People are our media buy. And it works.’

To help people understand the importance of fire safety, Mad Secret Labs used a 3-D projection mapping system to virtually burn a house to the ground and rebuilt it in under four minutes. 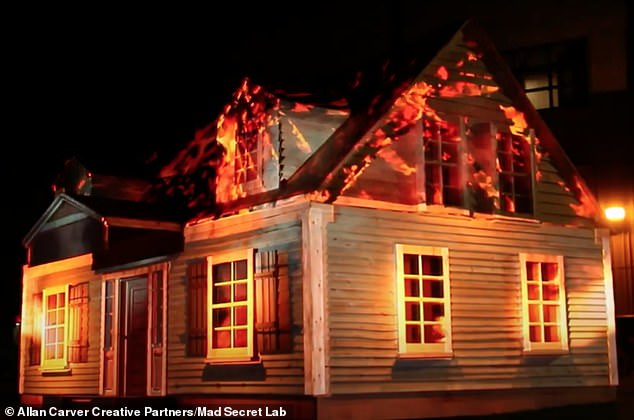 As part of a fire-safety promotion with Johnson Insurance, Carver’s Mad Secret Labs used a 3-D projection mapping system to virtually burn a house to the ground and rebuilt it in under four minutes

The activation, which was for Johnson Insurance, included firefighters and a real firetruck and with lights and sirens.

Carver was inspired to build the TIE fighter in December 2017, when Star Wars: Episode VIII – The Last Jedi was getting ready to hit theaters.

He built the formidable ship all by himself with materials left over from other projects and upcycled components—starting with an old wheelchair on its way to a landfill.

‘I grabbed it and used the motors and wheels,’ Carver said. ‘The ship’s frame is steel that was all cut, bent, and shaped by hand.’ 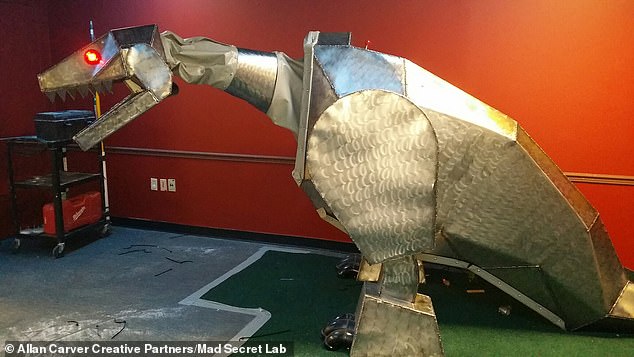 Failing, Carver said, is by far the single most important step to success. ‘You learn so much more by failing. Couple that with persistence and you always achieve success.’ Pictured: RoboRex, a 13-foot long metal robot dinosaur kids can maneuver with a remote control

The outer shell of the fighter’s center pod is foam Carver had left over from a giant dinosaur build, while the hatch is his plastic garbage can lid— ‘because it was the right size and had the proper curve.’ 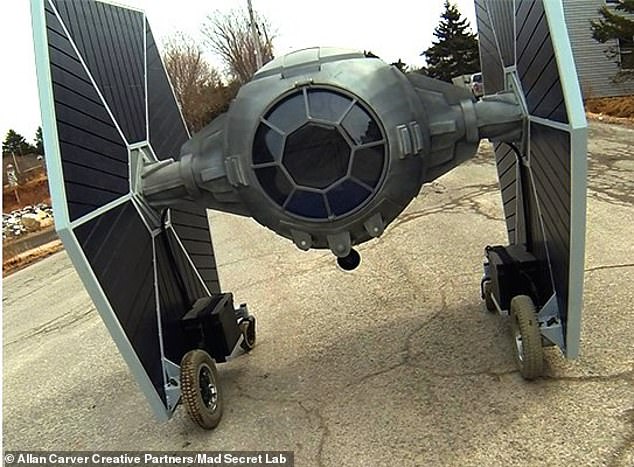 Carver was inspired to build his one-third scale TIE fighter in December 2017, when Star Wars: Episode VIII – The Last Jedi was coming to theaters

‘I did buy a remote control unit and a sound module that plays the Empire’s theme and TIE Fighter sound effects,’ he said.

Most of Carver’s projects are client commissions but he swears ‘I never do a project I hate.’

‘If there is a project that I think will bring a smile to someone’s face, I’ll just do it and often a client jumps on board,’ he said.

‘Right now, there’s been a lot of talk about sharks in our area, so I thought it would be cool to build a giant shark fin that’s really a bicycle,’ he added. ‘That’s a project I’m building now because I want to—I do have a client in mind, but if they don’t want to play, no worries. I’ll still have a giant shark fin to ride around in.’

Past commissions have included a motorized witch’s broom and giant rideable Lego brick, both fashioned from old electric scooters.

He’s still working on a Batmobile created from a lawn tractor, and will soon get cracking on a miniature electric version of Mr. Bean’s mini Austin Martin.

Not all of Carver’s projects are motorized, though: he’s just putting the finishing touches on an outdoor bar that’s a 26-foot tall lighthouse called Tuna Lite.

‘The design was inspired by a local lighthouse that burned down in the 1950s, and we wanted to bring a bit of heritage back to our community.’ 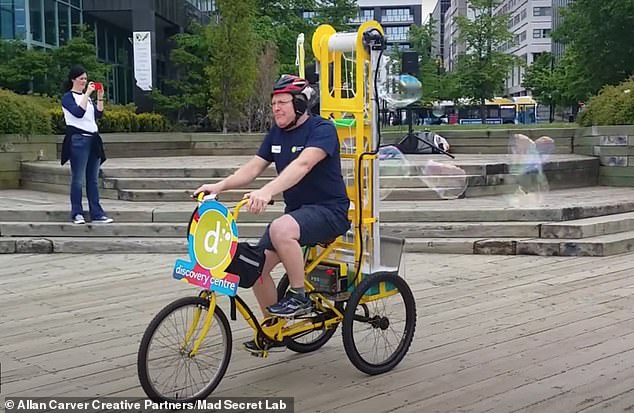 ‘You learn so much more by failing,’ says Carver. The first iteration of his bubble bike was a ‘total flop.’ But its successor is now part of the Halifax Discovery Museum

He’s the first to admit not every invention comes out as planned: his design for an 11-foot bicycle, dubbed ‘Nova Scotia’s tallest bike,’ had to be retooled to a more modest height.

‘It was too tall to be safe. So in my infinite wisdom decided to cut it down to a much safer 8 feet,’ he explained. ‘Then I learned about height versus wheelbase by pulling a wheelie and hitting the brakes.’

He suddenly lost all momentum and had scant seconds to decide how to fall.

‘No bruises on that one, but it was close,’ he recalled. ‘If you build a tall bike, don’t build it higher than your outstretched hands. Anything higher really hurts when things go wrong.’

But failing, he insists, is by far the single most important step to success.

‘You learn so much more by failing. Couple that with persistence and you always achieve success.’

His first version of a bubble bike—a bicycle that blows giant soap bubbles as the wheels turn ‘was a total flop,’ he said. ‘It looked good on paper but was a miserable failure in reality.’

But the next iteration ‘work[ed] like a charm,’ and wound up getting used by the Halifax Discovery Museum.

Aside from perseverance, Carver does have another helpful hint: ‘If you build a motorized bicycle, show your son how to stop before you show him how to hit the gas. It’ll save you a few bandaids and explanations to your spouse.’

How to save text messages on iOS and Android

Where does vanilla extract come from? The disgusting truth

The insider pro trick to find any photo on your phone...

Is a Jaffa Cake a biscuit? Physicist uses AI to solve...