Are you sure, Pep? Guardiola denies contract break clause but club stay silent as sources reiterate stance with Spaniard able to leave City in summer

By Mike Keegan For The Daily Mail

Pep Guardiola has denied there is a break clause in his contract, despite Sportsmail having utter confidence in its existence.

Sportsmail reported that the Manchester City manager had an option in his deal — which runs until the summer of 2021 — to depart at the end of this season.

This newspaper stands by the story and there were no complaints from City on Friday.

Pep Guardiola has denied there is a break clause in his contract, despite Sportsmail’s reports

When asked about the break clause ahead of Saturday’s clash with Arsenal, Guardiola said: ‘No. It is not true. I spoke a few weeks ago about my intentions with the club.’

After Guardiola’s comments, sources again confirmed the accuracy of the story.

Guardiola signed the contract extension last year but it included the agreement that he could leave at the end of this season if certain stipulations that satisfy the club are met.

City are confident, however, that Guardiola will stay to the end of his deal and hope he will add to the two Premier League titles he has won.

To do that this season they cannot afford to drop any more points but will still be without Sergio Aguero for the trip to Arsenal. They also head to London with only two fit senior central defenders. 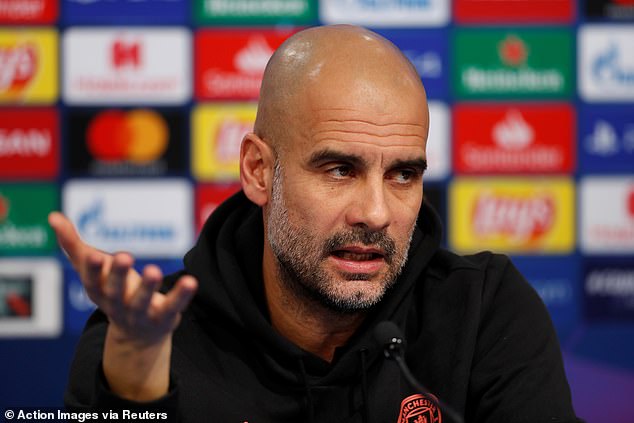 Aguero is not training with Guardiola’s squad after sustaining a thigh injury last month, with Gabriel Jesus leading the line in his absence.

Guardiola revealed John Stones is out with a muscle injury, leaving Fernandinho and Nicolas Otamendi as the likely pairing at the back.

David Silva is also a doubt after receiving a kick against Manchester United last weekend. He will have a late fitness test.

Arsenal CONTROVERSY: Did you see what linesman said about Aubameyang? This...