Just a week after scientists reported evidence that our species left Africa earlier than we thought, another discovery is suggesting the date might be pushed back further.

Homo sapiens arose in Africa at least 300,000 years ago and left to colonize the globe.


Scientists think there were several dispersals from Africa, not all equally successful.

Now comes a discovery in India of stone tools, showing a style that has been associated elsewhere with our species. They were fashioned from 385,000 years ago to 172,000 years ago, showing evidence of continuity and development over that time. 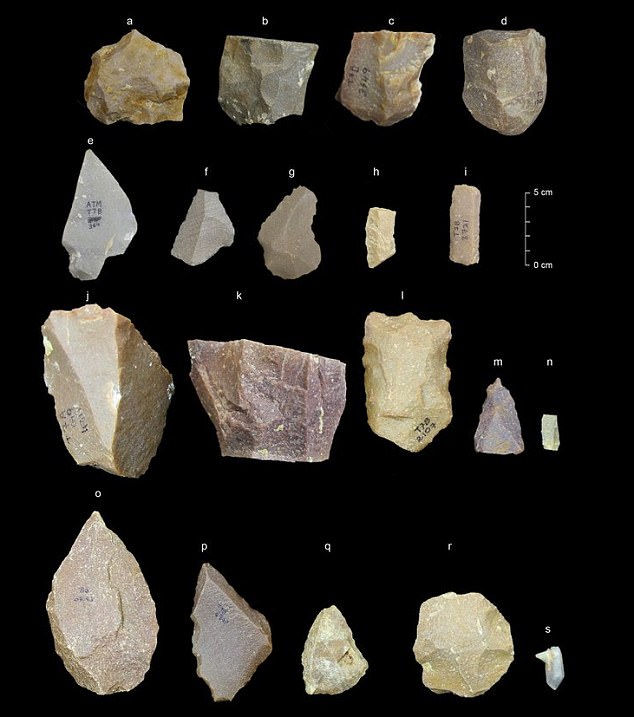 Artifacts from the Middle Palaeolithic era found at the Attirampakkam archaeological site in southern India. The discovery of stone tools at the site shows a style that has been associated elsewhere with our species. They were fashioned from 385,000 years ago to 172,000 years ago, showing evidence of continuity and development over that time. That starting point is a lot earlier than scientists generally think Homo sapiens left Africa

This tool style has also been attributed to Neanderthals and possibly other species.

So it’s impossible to say whether the tools were made by Homo sapiens or some evolutionary cousin, say researchers who reported the finding Wednesday in the journal Nature.

‘We are very cautious on this point’ because no human fossils were found with the tools, several authors added in a statement. 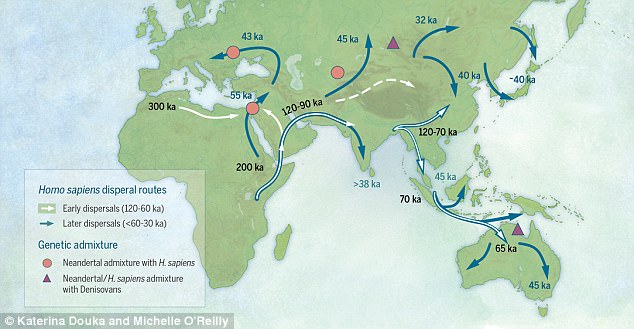 Researchers suggest that early humans began crossing to Eurasia as early as 120,000 years ago. Pictured is a map of sites and migratory pathways taken by modern humans dispersing across Asia according to findings from a new study

INTERBREEDING WITH OTHER SPECIES

After leaving Africa, our ancestors interbred with other hominins already present in Asia, such as Neanderthals and Denisovans, the researchers said.

Recent research estimates that all present-day non-Africans have 1-4 per cent Neanderthal heritage.

Another group suggested that modern Melanesians have an average of 5 per cent Denisovan heritage.

Neanderthals, Denisovans and perhaps other hominin groups likely overlapped in time and space in Asia, and certainly had many instances of interaction, the new study claimed.

It’s not clear how much the tool development reflects arrival of populations or ideas from outside India, versus being more of a local development, said one author, Shanti Pappu of the Sharma Centre for Heritage Education in Chennai, India.

The tool-making style was a change from older stone tools found at the site, featuring a shift to smaller flakes, for example.

Michael Petraglia, an archaeologist who specializes in human evolution in Asia but didn’t participate in the work, said he did not think the tools show that our species had left Africa so long ago.

‘I simply don’t buy it,’ said Petraglia of the Max Planck Institute for the Science of Human History in Jena, Germany.

Instead, he said, he believes one of our evolutionary cousins in India developed the tool style independently of outside influence.

The tools at the site northwest of Chennai in southeastern India are closely related to the older tool-making style there and seem to represent a transition, he said.

The idea that they reflect knowledge brought in from elsewhere would be tough to prove in India, he said.

The country has few well-studied archaeological sites and only one fossil find from this period, from a forerunner of Homo sapiens that was associated with the earlier style of tool-making, Petraglia said.

Modern humans carry traces of DNA from mixing with other hominids, including Neanderthals and Denisovans.

In February, researchers at the University of Washington School of Medicine analysed the DNA of 1,500 people, including those from Europe, Asia and the Pacific islands, to see where these ancient genes remain.

They identified 126 areas of the modern human genome where ancient DNA persists. 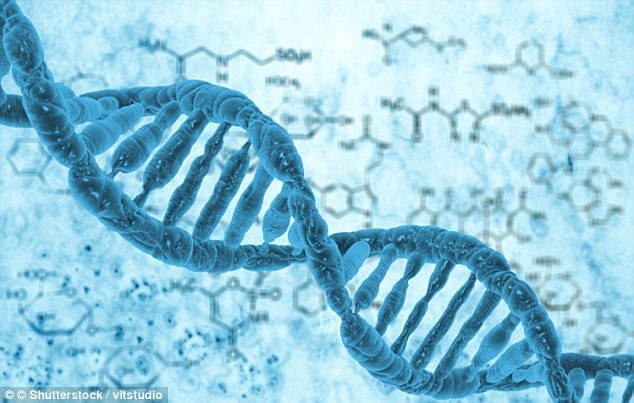 Modern humans carry traces of DNA from mixing with other hominids, including Neanderthals and Denisovans (stock image)

They found genes relating to the immune system and skin function.

Neanderthal gene expression likely contributes to traits such as height and even our susceptibility to lupus and schizophrenia.

Scientists believe the genes from our extinct cousins helped modern humans to thrive as they moved outwards from the African continent.

Good-Bye USA – I Sold Everything | Living Now in BARCELONA, SPAIN