A talking whale. It sounds like something out of Finding Nemo. But this isn’t a Disney-Pixar film. Wikie the 16ft female killer whale has been taught to say ‘Hello’ and ‘Bye Bye’, and ‘One, Two, Three’, as well as the name of her trainer, ‘Amy’.

The whale’s squeaky ‘voice’ — the sounds emerge through her blowhole — has been analysed by scientists from the University of St Andrews in Scotland who are carrying out serious and valuable work on the way whales communicate.


But as one of the scientists, Josep Call, admits: ‘We have no evidence that they understand what their “hello” stands for’. 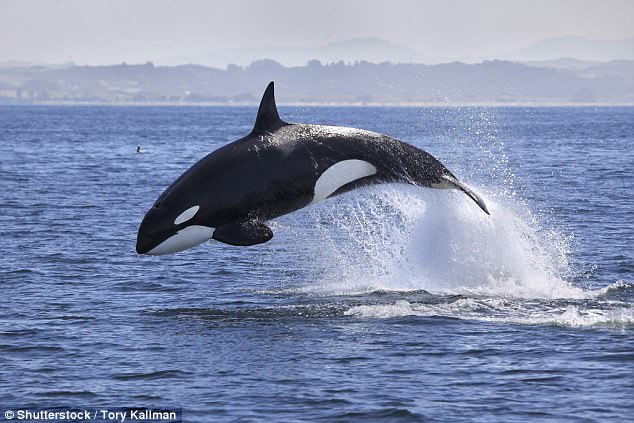 Killer whales are one of the most intelligent animals on earth, with brains that are bigger than a human’s

The fact is that Wikie’s ability to ‘talk’ probably amounts to nothing other than a circus trick.

She has been taught to respond to humans — to what they say and what they do — on the basis that she will be rewarded with some fish.

And, of course, many other creatures have the ability to mimic humans. Parrots, ravens and mynah birds are famous for it.

The difference here, though, is that killer whales are one of the most intelligent animals on earth, with brains that are bigger than a human’s.

And in common with all whales, their ability to communicate with each other in the ocean, often across unfathomable distances, is one of the most remarkable phenomena of the natural world.

The tragedy is that Wikie has never known the open sea. She was born at Marineland, an oceanarium in Antibes in the South of France.

Her two sons, Moana and Keijo, the product of artificial insemination, live with her. Male orcas spend all their lives with their mothers — it is one of the closest bonds in the animal kingdom, and mothers teach their sons everything they need to know to survive in the wild.

But what skills can Wikie pass on to her offspring in a concrete tank? And what can she tell us about cetacean communication compared to her cousins in the wild? 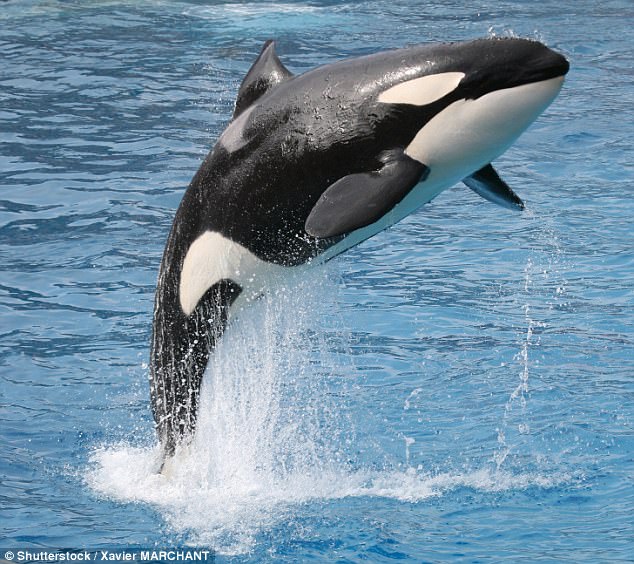 Unlike humans, a whale’s eardrums are in direct contact with the sea making them much more attuned to sound

Whale sounds have long fascinated scientists, for good reason. Their voices say so much about these extraordinary creatures and the bonds they form with each other.

Whales and dolphins are far more attuned to sound than we are. Unlike human hearing, which is shielded in the water by an airspace in the inner ear, a whale’s eardrums are in direct contact with the sea.

And since water conducts sounds five times more readily than the air, this means cetaceans are mesmerisingly attuned to long-distance hearing.

A humpback whale singing in the Caribbean, for example, can be heard by a fellow whale off the west coast of Ireland more than 4,000 miles away.

Eighty-foot-long fin whales — second only in size to the blue whale — can make low-frequency moaning sounds beyond the range of human hearing that also travel thousands of miles.

Whales are highly social and are always ‘talking’ to each other.

In the Pacific, there are five different ‘clans’ of sperm whales. Each communicates using loud clicks that they create in their huge, bulbous heads where there are oil-filled reservoirs that act as natural amplifiers.

These five clans ‘speak’ the same language, but with subtle differences or dialects — just as a Yorkshire person talks English, but not in quite the same way as someone from Devon.

When ‘chatting’, sperm whales’ clicks are deep and sonorous and regular — like cetacean Morse code.

In the BBC’s Blue Planet there was a scene where a sperm whale was swimming and clicking in this way while talking to its calf. It then appeared to tell the calf to stay where it was near the surface — the youngster had not yet learned to dive — before itself diving down for up to two miles. 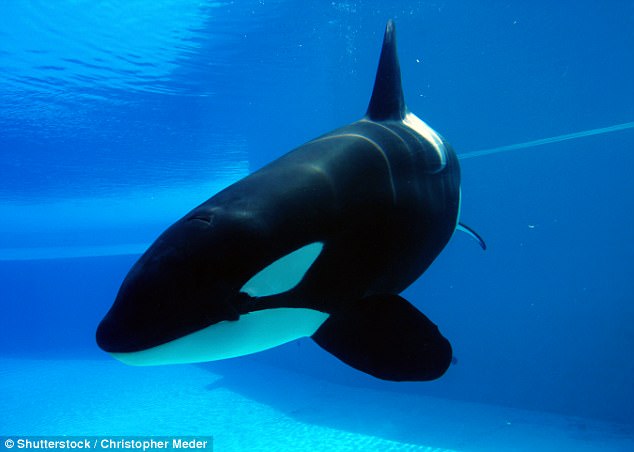 At this point it turned its clicks to another purpose — as a long-range sonar to locate prey such as squid. Scientists have found sperm whales can detect a single squid less than a foot long from a mile away.

Sometimes, to actually stun or even kill its prey — which can include 40ft giant squid — a sperm whale can amplify its clicks to an ear-bursting 230 decibels, louder than a jet engine at take-off.

In contrast to this cacophony, Arctic beluga whales sing so sweetly that they’re called ‘the canaries of the sea’.

Much of the study of cetacean communications has been on dolphins — for the simple reason that they have been available for research in captivity.

Could killer whales — which are, essentially, big dolphins — also give each other names? Certainly, separate populations of orca will define themselves by the way they ‘speak’, as well as by what they eat — fish, or seals, for instance. This is a form of whale culture in the same way that we humans express our culture through food.

Orca will also use their highly complex vocalisations to co-operate in hunting. If it sees a seal or a fish as an intended target, one whale will tell other whales what the prey is and where it is, inviting its colleagues to join in a combined attack.

Having studied cetaceans for 16 years now, I have been lucky enough to swim with them on a number of occasions.

From the shrill squeaks of very excited dusky dolphins swooping and diving in their thousands off the Pacific coast of New Zealand, to the much more sonorous clicks of sperm whale pods in the Azores, I can attest to the fact that they all communicate on a grand scale.

It’s like being at a very noisy, aquatic cocktail party. Or perhaps the biggest outdoor rave ever staged. 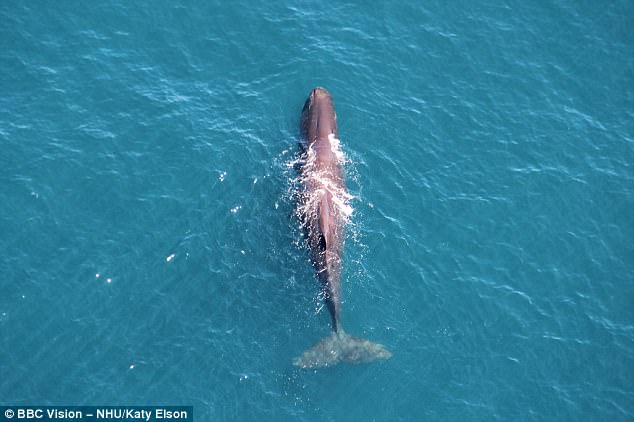 In the Pacific, there are five different ‘clans’ of sperm whales and communicates using loud clicks that they create in their huge, bulbous heads where there are oil-filled reservoirs that act as natural amplifiers

Marine mammals express the intensely close nature of their society in these sounds. It is their watery internet, an aquatic web of togetherness, an outlet for their feelings — including joy and grief and fear.

In the Indian Ocean, I’ve witnessed female and young sperm whales, under attack from killer whales, issuing a distress call, summoning large male sperm whales to their rescue from a huge pod of 150 animals that was miles away.

It was extraordinary to observe this encounter, played out in excruciating sound.

The hunting whistles of the orca, following the tactical directions of their matriarch leader as they attempted to attack the sperm whales’ young.

The distressed clicks of the larger, usually placid sperm whales as they defended their families.

Both species were engaged in a fight for survival, expressed in their respective urgent calls. It moved me deeply to see the large bull sperm whales presenting their flanks to defend the young under attack and ultimately defeat the predators. Although of course, that meant the killers didn’t get to eat that day.

Rather more relaxed was my experience sharing the water with a singing humpback whale off the coast of Mexico. Even before I got in, I could hear his voice, a rumbling, burbling, trilling sonata, emerging from the sea’s surface, as if it were a loudspeaker.

In the water, the sensation was magnified. It was the most astonishing experience as my rib cage trembled with the deep bass of his song.

Humpback song is complex. It changes each year — as if it were that season’s hit tune. Only the males sing — for mates. But it’s difficult not to believe that they also do it for the sheer beauty of the sound.

We cannot of course conceive of cetaceans in the same way we see ourselves. ‘Talking’ and ‘singing’ are, in reality, anthropomorphic terms. We are the only animals on earth who use a vocabulary.

Whales and dolphins communicate in a very different manner. They also use body language and gestures to create a communicative bond so strong that no whale can exist, in any healthy or meaningful manner, without that intimate sense of communication with one another.

Perhaps that’s why the idea that ‘tame’ whales and dolphins like Wikie — held in captivity close to the open sea where they ought to be swimming wild and free and ‘chattering’ — are learning our human idioms is, for all its good intentions, a distinctly unsettling one.

Professor Philip Hoare is the author of RisingTideFallingStar (4th Estate) For more about whales, go to uk.whales.org

With FilmStruck disappearing, Criterion is launching its own streaming service

Tory leadership race: Who will be the next prime minister?

My date with a robot