A slice of pizza in the morning might be healthier than a bowl of frosted flakes, a nutritionist claims.

Registered dietitian Chelsey Amer said a slice could be a more balanced breakfast option than most cereal because it has more protein, more fresh ingredients, and less sugar than cereal.


Despite being a breakfast staple, most commercial-brand cereals lack nutritional value, and don’t contain enough protein or healthy fats.

Amer said pizza will provide a strong balance of protein carbs and fats unlike many popular cereals that contain the same amount of calories in a candy bar. 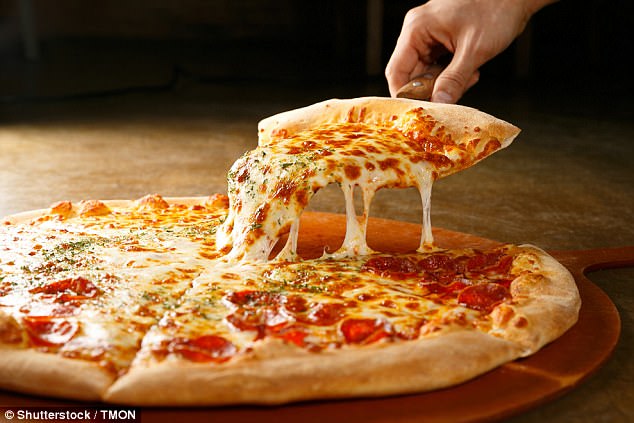 ‘You may be surprised to find out that an average slice of pizza and a bowl of cereal with whole milk contain nearly the same amount of calories,’ Amer told The Daily Meal. ‘However, pizza packs a much larger protein punch, which will keep you full and boost satiety throughout the morning.’

A single serving of Frosted Flakes contain 110 calories, 0 grams of fat. and 10 grams of sugar.

While 111 calories per serving doesn’t seem like a lot, many people don’t stick to just one serving.

A 2014 study by Consumer Report found that, depending on the size of the bowl, most people eat up to 132 percent more than a single serving.

Meanwhile a slice of cheese pizza contain an estimated 272 calories, 12 grams of protein, 10 grams of fat, and 4 grams of sugar.

Given these numbers, eating pizza over Frosted Flakes may not be such a bad choice since it has much more essential fats and protein, and fewer grams of sugar.

On top of that, pizza contains all the major food groups — grains, fruits and vegetables, and meats.

On her blog, Amer said there are a few benefits to chowing down on a cheese slice in the morning.

‘Because eating a slice of pizza for breakfast when you’re really it, will prevent you from binging on an entire pie later,’ she wrote.

She also added that many cereals shouldn’t be considered a balanced part of breakfast since they contain so much sugar.

Nutrition in slice of pizza

Nutrition in a serving of Frosted Flakes 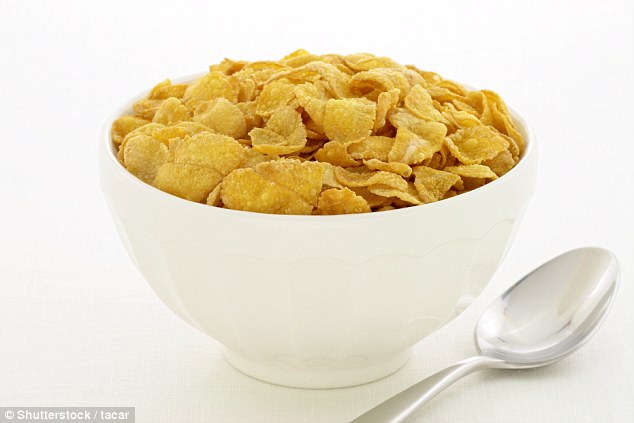 ‘I love cereal as much as the next person, but many sugary cereals contain as much sugar as a candy bar! I don’t know about you, but a sugar is not how I like to start my day,’ she wrote.

Research published by the Obesity Coalition found sugar makes up more than 35 percent of the ingredients in some popular cereal brands.

‘Unless you’re choosing the whole grain option, cereal can cause a surge of blood sugar, which releases insulin and that being repeated every day is not good for your body,’ nutritionist Tammy Lakatos Shames, of the Nutrition Twins, previously told Daily Mail Online.

‘The calories add up really quickly and you’re hungry before you know it. You can have one portion of cereal and be adding 400 calorie to your day.’

However, some experts say pizza isn’t a healthy food and people shouldn’t be eating Dominoes for breakfast

‘I wouldn’t say going to a pizzeria and eating a pizza is an ideal meal,’ Wendy Kaplan, registered dietitian, told Daily Mail Online.

The nutrients found in pizza does not outweigh the bad — refined carbohydrates, saturated fats and sodium, she added.

The calories and fat in pizza also varies depending on who’s making it, Kaplan said, so people aren’t sure just how much salt they are consuming.

However, Kaplan said if people opt to make their own pizza using whole grain crust and loading it with vegetables, it could become a healthier breakfast option.

If the idea of turning pizza into a breakfast staple is off-putting, there are healthier cereal options they can try.

Experts say a serving of breakfast cereal should contain at least 6 grams of fiber, which can help lower cholesterol and blood sugar and help keep people fuller longer, and should contain no more than 3 grams of sugar.

‘Frosted Flakes and Lucky Charms are not healthy cereals,’ Kaplan said. ‘But something like bran flakes with low-fat milk and half a cup of fruit would be.’

Coronavirus public inquiry to be held in spring 2022

Coronavirus: Moral duty to get all children back in school – Boris Johnson

GlobalNewsEveryday - May 13, 2021
0
Do you dream of decorating your home with beautiful, bohemian-esque throw blankets, colorful candles and glamorous mirrors from Anthropologie? How about the brand’s...

Being a couch potato ‘bad for the memory of over-50s’