Following a ‘fashionable’ fast for just one week can damage the heart, new research suggests.

Obese people who suddenly lower their calorie intake to just 600-to-800 units a day, experience heart-fat level increases of 44 per cent, a trial found today.


Despite such dieters on average losing six per cent of their total body fat after just seven days, this fat is released into their bloodstream and absorbed by their hearts, the researchers explained.

Although this excess heart fat balances out by week eight of dieting, for people with heart problems, it could leave them breathless and with an irregular beat, the scientists add.

Study author Dr Jennifer Rayner from the University of Oxford, said: ‘Otherwise healthy people may not notice the change in heart function in the early stages.

‘But caution is needed in people with heart disease.’

Heart disease, which is linked to obesity, affects more than 1.6 million men and one million women in the UK. 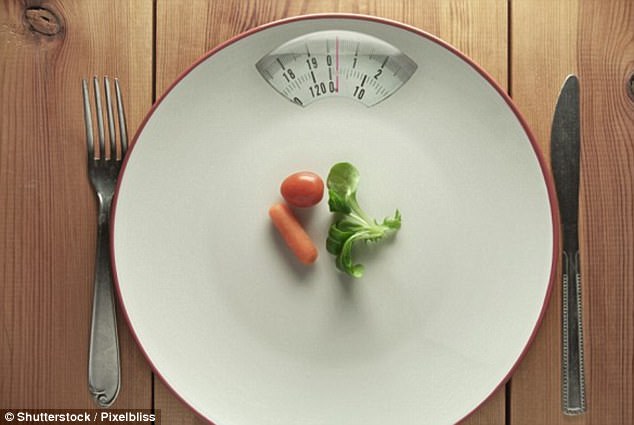 DO YOU LOSE WEIGHT WITH EXERCISE ALONE?

Exercise without dieting does not cause weight loss, research suggested in November 2017.

After up to eight weeks of intensive cardio training three times a week, people experience no significant change to their weight or BMI if their diet stays the same, a a study found.

Among those who are obese or overweight, their so-called ‘hunger hormones’ are significantly altered, with researchers believing an increase in appetite may undo any weight-loss effects from exercise.

Study author Dr Hans-Peter Kubis from Bangor University, said: ‘To be effective, exercise training for weight loss needs to be integrated into a lifestyle approach to weight loss, including exercise combined with diet.’

Among those of a healthy weight, intense exercise does significantly increase their mean muscle mass, which the researchers add should encourage people to be active despite the lack of weight-loss effects.

Dr Kubis said: ‘Seeing no change on [the] scales may be enough to make people give up on their exercise training, not realizing that they have actually improved their body by gaining muscle mass.’

The researchers analysed women who completed circuit exercise training programmes three times a week for between 45 and 90 minutes per session.

The participants’ diets did not change.

‘The diet should be supervised’

‘The heart muscle prefers to choose between fat or sugar as fuel and being swamped by fat worsens its function.

‘If you have heart problems, you need to check with your doctor before embarking on a very low-calorie diet or fasting.

‘People with a cardiac problem could well experience more symptoms at this early time point, so the diet should be supervised.

‘Otherwise healthy people may not notice the change in heart function in the early stage.’

More positively, the results further reveal one week of crash dieting causes an 11 per cent decrease in abdominal fat, which surrounds major organs, and a 42 per cent reduction in liver fat.

These changes are associated with improved cholesterol and blood pressure levels, as well as lowered insulin resistance, which helps to protect against type 2 diabetes.

How the research was carried out

The researchers analysed 21 obese volunteers with an average age of 52 and a BMI of 37kg/metre squared.

The study’s participants ate a very low-calorie diet every day for eight weeks.

MRI scans were taken at the start and end of the investigation, as well as after week one.

The findings were presented at the European Society of Cardiology congress in Barcelona.

Daily Covid cases down for fourth day in UK

Covid cases at record levels for 20 to 29-year-olds