The most critically injured patients in rural areas are at risk due to the time it takes the ambulance service to reach them, a BBC investigation has found.

Some rural communities wait more than 20 minutes on average for 999 crews or trained members of the community to get to immediately life-threatening cases like cardiac arrests and stab victims.

A response should come in six to eight minutes, depending on where you live.

Experts said delays could make the difference between life and death.

This was particularly the case for cardiac arrests where “every second counts”, the British Heart Foundation (BHF) said.

For the full interactive experience, please update your browser or enable JavaScript. 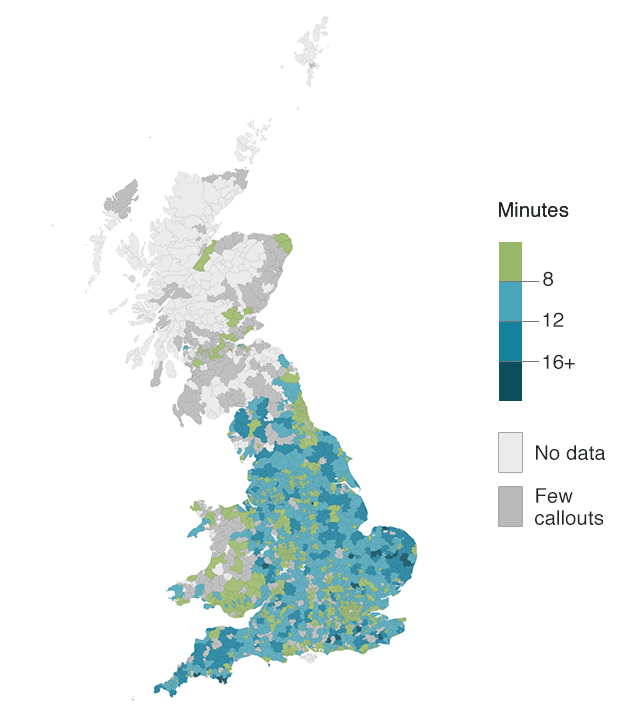 Enter a postcode or click on the map to explore

Source: Ambulance trusts. Data is shown for postcode districts with more than nine highest category callouts in January-October 2018. Districts with 10-49 callouts are labelled “low numbers”. Northern Ireland does not use comparable categorisation.

Click here if you cannot see the interactive map

Wells-next-the-Sea has longest wait for ambulances

Ambulance bosses accepted some responses took longer than they should but said staff were working hard in “challenging circumstances” due to the levels of demand and the remote nature of some locations.

They said expert advice was provided over the phone until a response arrived.

What has the BBC investigation found?

Using the Freedom of Information Act, BBC News has obtained the average response times for the most life-threatening callouts in more than 2,700 local communities across Britain.

These times cover the point at which a trained person reaches the patient – so it could be an ambulance or volunteers trained by the service to respond to these highest-priority cases.

They represent about one in 20 emergency cases the ambulance service deals with, and are prioritised above all others because of the risk to life.

The BBC News investigation shows there are some rural areas in Britain where it took over 20 minutes on average for the ambulance service to reach a patient during January to October last year.

That compares with responses in under five minutes in a number of town and city neighbourhoods.

Across all the communities in Britain, the average response time for rural areas was 11 minutes 13 seconds – more than 50% longer than the seven minutes 14 seconds it takes in urban areas.

Does this put those in rural areas at risk?

Every moment counts for these patients – none more so than the cardiac arrest cases.

Research has shown that if patients are given all the treatment immediately, including cardiopulmonary resuscitation (CPR) and defibrillation – an electric shock to restart the heart, about two-thirds can survive.

But every minute delay reduces survival by 10%.

And this is one of the reasons why there has been a big emphasis on putting defibrillators in community settings and encouraging people to learn how to do CPR.

Judy O’Sullivan, of the BHF, said it was “critical” that expert help from the ambulance services arrived as “quickly as possible”.

But she said CPR from ordinary members of the public was also vital – in the UK, this happens in less than half of cardiac arrests that occur out of hospital.

“When someone has a cardiac arrest, every second counts,” Ms O’Sullivan added.

How long should patients wait?

There are different targets depending on where you live in the UK.

In England, ambulance services are expected to reach patients within an average of seven minutes.

That has to be a “trained response” – but this can include community first responders, who can be members of the public and off-duty health professionals, who have been given special training to deal with life-threatening conditions until an ambulance crew arrives.

In Scotland the expectation is that at least half of patients will be reached in six minutes.

In Wales, the target is that most patients are reached in eight minutes – but having a defibrillator on scene and ready to use even if it is in the hands of a member of public counts as a response.

The most immediately life-threatening calls are prioritised above all others by the ambulance services.

And ambulances are automatically dispatched to the scene when one comes in.

But control-room staff, such as Sue Hinton, who works for the West Midlands service, also step in to see if there are any other options if it looks like it will take some time to reach the patient.

She likened it to a “game of chess”, with crews stationed at different points in a region to give them the best chance of responding.

“You are constantly moving people around trying to get to the patients in the quickest time,” she said.

And rural areas were particularly “challenging” because of the distances involved, narrow roads and – when the weather was bad – the difficulty getting around.

“We utilise everything we have to get to patients as quickly as we can,” Ms Hinton said

And this included seeing if there were closer crews that could be diverted from other jobs as well as putting calls out to community first responders who may be closer to the scene and often know the areas better than ambulance crews.

“These trained volunteers are invaluable in rural areas,” she added.

Which community waits the longest?

It depends on how you cut the figures. BBC News analysed 586,000 emergency responses across more than 2,700 different postcode districts. About one in 10 callouts was to rural areas.

There were 300 districts that had a very small numbers of critical cases, including some remote parts of Scotland where there was just one callout during the 10 months looked at. Some of these took over an hour to reach.

There were 2,400 locations that had at least 10 callouts and a number of areas that waited over 20 minutes for a response.

But to obtain a trustworthy response time for a local area, BBC News judged, there needed to have been at least 50 callouts over the time period – more than one a week.

There were 2,000 locations with that level of demand.

The single longest wait was seen in the NR23 postcode in and around Wells-next-the-Sea, on the north Norfolk coast, followed by RH14, in Chichester, Sussex.

One former community responder in Wells-next-the-Sea told the BBC he resigned because of the length of time he was left with badly-injured patients before ambulance crews arrived.

These waits also were longer than those in any district with more than 50 callouts in Wales or Scotland but the differences in the way response times are measured may be a factor in that.

What does the ambulance service say?

Ambulance services say they are expected to achieve the average target response times on a regional and national level only – not down to the super-local level looked at by BBC News.

They also say there are other measures of performance, including the expectation that nine in 10 top-category callouts be reached within 15 minutes, that they perform better on.

Nonetheless, ambulance chiefs accept they would like to do better.

Anthony Marsh, who chairs the UK Association of Ambulance Chief Executives, said the levels of demand and the remoteness of some areas presented “challenging circumstances” for the service.

“Our staff are working flat out to deal with record number of 999 calls, to reach all patients as quickly as they can whether they live in rural or urban areas,” he said.

“Undoubtedly given the very rural nature of the majority of our country, there will be cases where we are longer to arrive than we would prefer.”

Mr Marsh also pointed out control-room staff would, if needed, stay on the phone line to offer “expert advice” until help arrived.

And he called on more members of the public to get trained in basic life support, so they would know what to do if faced with an emergency.

Other steps are also being taken to improve the speed of responses.

In some area, police and fire crews have been enlisted and trained to respond to calls, while the BHF is in the process of working with ambulance services to map where defibrillators are – large numbers have been bought privately and are not registered on ambulance systems.

Methodology: Postcode districts were assigned a rural or urban classification (RUC) based on the official classifications published by Department for Environment, Food and Rural Affairs and the Scottish government. In England and Wales, rural or urban classification begins with census output areas. We counted the number of each type of output area in a postcode district and categorised it by the majority. We performed a similar technique with the Scottish data but starting from individual postcodes. The small number of postcode districts that were at or near a 50-50 rural-urban split were discounted from our data.

Coronavirus cases stable across most of England

11 Of Our Favorite Face Masks, The Ultimate Self-Care Symbol

Why you can’t trust hotel booking websites: The reviews and ratings are often made up

Reality Check: Do you sleep worse at Christmas?