Cell phone radiation could pose a risk of certain cancers to some, the preliminary findings of two new major studies from the National Institutes Health suggest.

Six percent of male rats exposed to the same kind of radiation our cell phones emit – though in much larger quantities – developed a type of cancer called a schwannoma in their hearts.


The pair of studies are the largest the National Toxicology Program has ever conducted about the carcinogenic effects of cell phone radiation.

The authors caution that while much more research is needed to find out whether or not the ways that average people use cell phones could raise cancer risks, the findings highlight an ‘area of concern’. 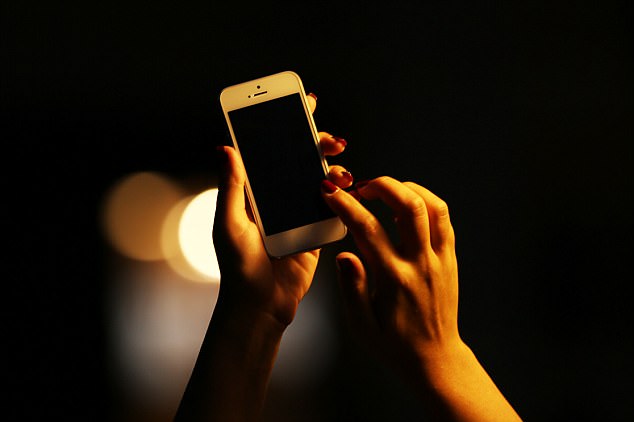 The NIH published the preliminary findings from its first-ever large study on cell phone radiation and cancer on Friday, finding an increased risk at least one kind of cancer in rats

Over the course of the last two years, researchers at the National Toxicology Program (NTP) of the National Institutes of Health (NIH) have been exposing rats and mice to varying levels of cell phone radio frequency radiation.

In 2016 – early days in the research timeline – the NIH scientists released preliminary data warning that it seemed there was a very possible link between cell phone radiation and cancer.

That early release prompted a spate of related research, which, in turn, prompted the state of California and former NIH toxicologists, among others, to issue warnings in the last year.

Smartphones and other wireless devices put out small amounts of low frequency microwave radiation when they connect networks and transmit information.

This energy is not nearly as strong as ultraviolet radiation or X-ray energy, but the new studies add to the mounting evidence that even microwave radiation, in high doses, can pose some health risks.

In their multi-million dollar study, the NTP researchers exposed rats and mice to high levels of radiation over the course of 18 hours each day, alternating 10-minute exposures with 10-minute periods without exposures.

Radiation surges when cell phones are trying to connect to faint network signals or transmit large amounts of information.

Experts warn that it is these inconsistent exposures that make the devices particularly risky.

‘Our ultimate findings are about the same as we put out in 2016,’ says study co-author Dr John Bucher.

What they found, both early on and at the end of the study, was that there were ‘statistically significant’ differences in the incidence of heart schwannoma tumors in rats.

The incidences of other cancers were not higher, statistically speaking, than the researchers would have expected to see in rats as they aged in general.

Schwannomas develop from peripheral nervous cells, called Schwann cells. They develop inside the sheath that covers nerves, wrapping and interfering with nerves themselves.

In humans, these tumors are usually benign. These noncancerous schwannomas are most common in the vestibular nerve that connects the brain and the ear.

Malignant schwannomas can start anywhere, but seem to be most common in the leg, arm or lower back, sometimes causing a bump, pain, muscle weakness or tingling.

Though they are not common in human hearts, cardiac tissue is a good target for cell phone radiation, Dr Bucher says. 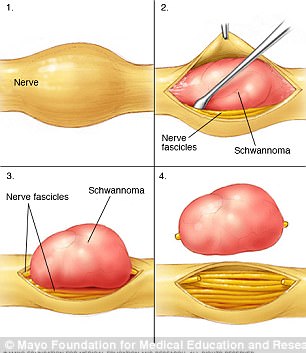 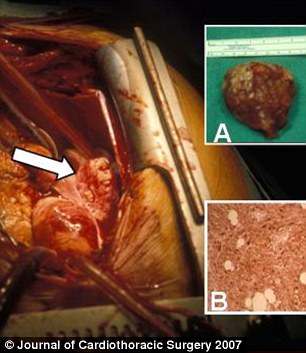 Schwannomas are tumors that begin to grow around nerves, inside their protective sheaths (left). The new research linked high levels of cell phone radiation exposure to schwannomas in the hearts of male rats, a rare condition in humans (right)

Microwave radiation works by heating water. Muscle tissue – like the heart – is 75 percent water, while fat, for example, is only about 10 percent water.

That means that muscular tissues are especially affected by cell phone radiation, which my explain why the nerve tumors were most likely to form in a highly muscular organ.

So, the higher rate of tumors in males ‘was probably due to the fact that male rats simply absorb more radiation than females as a function of the size of the animal,’ Dr Bucher explained.

Similarly, cancer risks for mice were negligible, and female rats that were pregnant – and therefore larger – were also more sensitive to radiation.

Though Dr Bucher says the levels of microwave radiation the animals were exposed to were much higher than we encounter from our cell phones, humans are, of course, considerably larger than rats.

It is also worth note that radiation exposures in the study would still comply with federal regulations on heat microwave heat generated by cell phones, and still there were increased risks of at least one cancer for rats.

Dr Joel Moskowitz, director of the Center for Family and Community Health at the University of California, Berkeley said that ‘the federal radio frequency radiation limits should be re-assessed and strengthened in light of these findings.’

The NTP findings have not been peer-reviewed yet, but Dr Bucher said that they are ‘important because they give us an area of concern, and we now have a starting place where we might know where to look’ for potential cancer risks from cell phones.

Covid vaccine phase two groups: When will I get vaccinated?

Decreasing levels of coronavirus across the UK

‘Fortnite’ has become a magnet for malware