How snakes used to have LEGS: Fossil reveals how ancient reptiles had limbs and cheekbones for 100million years before evolving to slithering form

By Ryan Morrison For Mailonline

Ancient snakes had legs and cheekbones during the first 100million years of their evolution, a new study into the origin of the slithering reptiles has revealed.

Researchers have been uncovering the secrets of the early snakes by studying the ‘remarkably well preserved remains’ of Najesh snakes discovered in Argentina.

The remains are thought to be from the early Late Cretaceous period about 100million years ago and show that snake legs weren’t just transitional, but persisted for millions of years.

The team were able to study the remains of a Najesh snake. It likely existed on Earth 100million years ago and had limbs for about 100million years. This is a render of Najash

The evolution of the snake body represents one of the most dramatic examples of the vertebrate’s ability to adapt, Professor Lee said.

The international study involved researchers from Canada, Argentina and Australia.

A limited fossil record made it difficult to properly understand how snakes evolved to the form they have today, which is what makes the fossils examined for this study so important, researchers say.

‘Snakes are famously legless, but then so are many lizards. What truly sets snakes apart is their highly mobile skull, which allows them to swallow large prey items’, said Dr Alessandro Palci, from Flinders University in Australia.

‘For a long time we have been lacking detailed information about the transition from the relatively rigid skull of a lizard to the super flexible skull of snakes’. 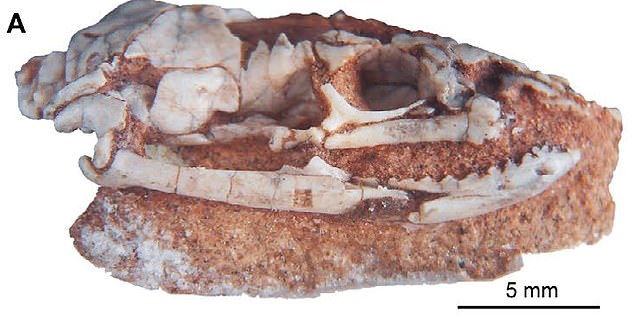 Researchers say being able to study the Najesh specimen helped them gain a much better understanding of how the modern snake evolved. This is part of a Najash skull 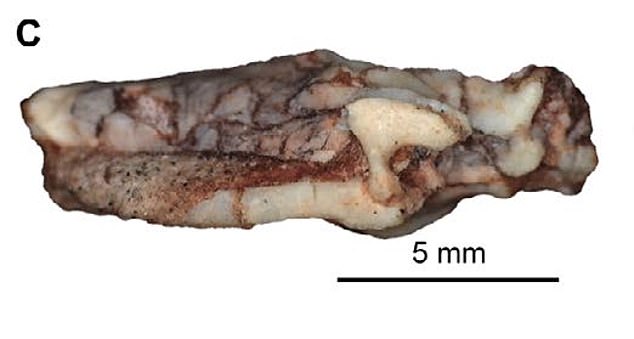 Najesh snakes may have had legs and cheekbones for up to 100million years, proving that snake legs were not just a transition period, but persisted. This is part of a Najash skull

Researchers say that Najash has the most complete, three-dimensionally preserved skull of any ancient snake ever found.

‘It has some, but not all of the flexible joints found in the skull of modern snakes. Its middle ear is intermediate between that of lizards and living snakes, and unlike all living snakes it retains a well-developed cheekbone, which again is reminiscent of that of lizards’, said Dr Palci. 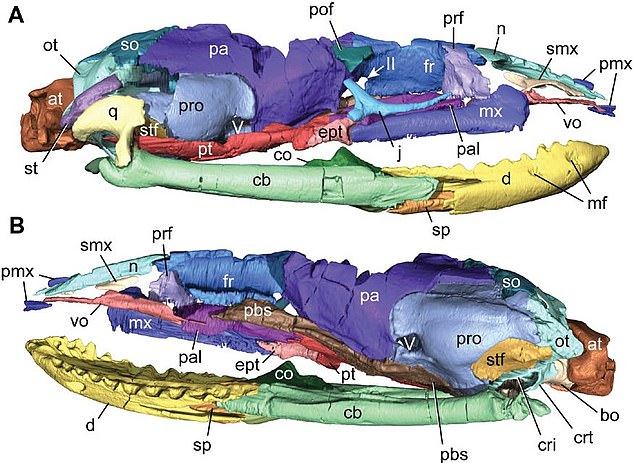 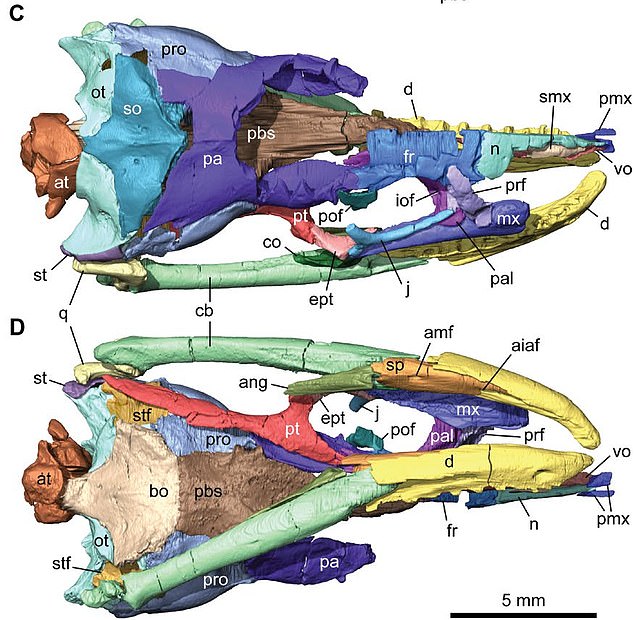 ‘The high level of imaging tools we used allowed us to peer deep into these early snake skulls and solve a lot of mysteries’, said Michael Caldwell, a study author

The new snake family tree including Najesh, also reveals that snakes possessed small but perfectly formed hind legs for the first 100million years of their evolution.

‘These primitive snakes with little legs weren’t just a transient evolutionary stage on the way to something better.

‘Rather, they had a highly successful body plan that persisted across many millions of years, and diversified into a range of terrestrial, burrowing and aquatic niches,’ says Professor Lee. 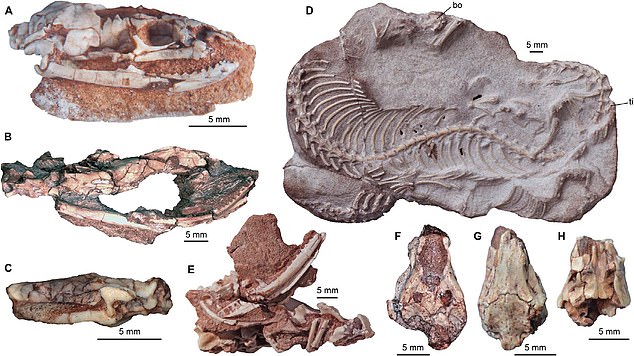 ‘These primitive snakes with little legs weren’t just a transient evolutionary stage on the way to something better’ says Professor Lee. This image shows a selection of Najesh remains

Researchers say this new study corrects 160 years of wrong information and provides ’empirical evidence’ for the way snakes evolved to their current form.

The nearly 100 million year old fossil snakes described in this study, found in Northern Patagonia, are closely related to an ancient lineage of snakes that populated the southern hemisphere.

They appear to be related to only a small number of obscure, modern snakes.

‘The high level of imaging tools we used allowed us to peer deep into these early snake skulls and solve a lot of mysteries’, said Michael Caldwell, a study author.

The paper will be published in Science Advances.

ARE HUMANS BORN WITH A FEAR OF SNAKES AND SPIDERS?

Researchers at MPI CBS in Leipzig, Germany and the Uppsala University in Sweden conducted a study which found that even in infants, a stress reaction happens when they see a spider or snake.

They found that this happens as young as six months-old, when infants are still very immobile and have not had much opportunity to learn that these animals can be dangerous.

‘When we showed pictures of a snake or a spider to the babies instead of a flower or a fish of the same size and color, they reacted with significantly bigger pupils,’ says Stefanie Hoehl, lead investigator of the underlying study and neuroscientist at MPI CBS and the University of Vienna.

‘In constant light conditions this change in size of the pupils is an important signal for the activation of the noradrenergic system in the brain, which is responsible for stress reactions.

‘Accordingly, even the youngest babies seem to be stressed by these groups of animals.’

The researchers concluded that the fear of snakes and spiders is of evolutionary origin, and similarly to primates or snakes, mechanisms in our brains allow us to identify objects and to react to them very quickly.

Cross found in Christian grave on display in Cambridge