Jorginho may not have earned many plaudits from Chelsea fans in recent weeks, but the masses went crazy for the Italian following his ice-cool penalty conversion in the Carabao Cup shootout with Tottenham.

Chelsea booked their place at Wembley following a 2-2 aggregate draw and a series of spot-kicks, bettering their rivals after misses from Eric Dier and Lucas Moura.

Jorginho was among those who stepped up for the Blues, and pulled off a bizarre technique to slot the ball into the back of the net.

Taking a large run-up, the playmaker pulled off a strange jump movement upon approach to the ball, which appeared to trigger goalkeeper Paulo Gazzaniga into picking his direction of diving.

As the ‘keeper then began to gesture momentum to his right, Jorginho continued, carrying through with his run-up and calmly slotted the ball in the opposite corner.

Fans were immediately in awe of the gall of the former Napoli man, and took to social media to share their reactions. 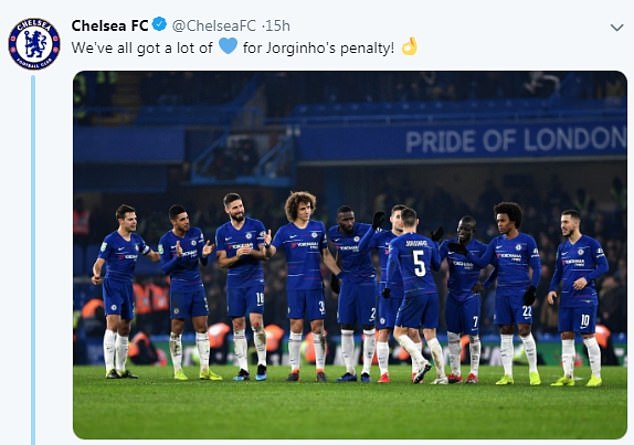 Chelsea themselves got the party kick-started, tweeting: ‘We’ve got a lot of love for Jorginho’s penalty.’

One fan responded simply remarking: ‘Ice in his veins!’

Another added that the midfielder’s spot-kicks ‘should be a criminal offence.’

Jorginho’s team-mate, Ruben Loftus-Cheek, couldn’t resist making his own jibe at the unusual technique, tweeting an animated video of a somebody comedy-leaping on a golf course.

The technique is not entirely new however, and has been seen in the MLS as executed by Atlanta United forward Josef Martinez – which another fan pointed out online with the use of a video.

The victory means Chelsea will make their 15th final in 16 years in all competitions, and will face Pep Guardiola’s Manchester City in the showpiece event on February 24.

Sex and the Subway Ad

14 Celebrity Couples Who Mastered The Art Of Coordinated Looks

32nd horse dies at Southern California racetrack in less than a...