What is sending radio signals to Earth from deep space like clockwork? Mysterious object 500million light years away is transmitting signals that hit our planet every 16-days without fail

By Joe Pinkstone For Mailonline

Astronomers have identified the first reliable pattern of a fast radio burst (FRB) source in deep space, but still don’t know what causes the phenomenon.

Such signals have baffled scientists since their discovery in 2014, as their origin is a complete mystery.

It belts out a signal for a few milliseconds once every hour, every hour for four days. It then goes silent for 12 days before resuming its 16 day cycle.

This is the first time a FRB pattern has been spotted by astronomers but the underlying reasons are unknown.

However, scientists have all but ruled out alien communication as 16 days for a message would be impractical and inefficient.

Scientists have now found one sporadic radio burst source 500million light years away expressing a specific pattern. It belts out a signal for a few milliseconds once every hour, every hour for four days. It then goes silent for 12 days before beginning again (stock)

The pattern was discovered after 400 days of observations by researchers at CHIME (Canadian Hydrogen Intensity Mapping Experiment).

Some radio bursts detected on Earth are one-offs, coming from a random space and never seen again.

But some repeat several times, although it was previously believed this was done at random.

Now the astronomers at CHIME, who declined to comment on the finding, proved this not to be the case by studying FRB 180916.

‘It’s potentially going to take us in an interesting direction to get to the bottom of these repeaters.’

No explanation has yet been found, but astronomers speculate it may be due to its source being in orbit.

‘Such a periodicity, if confirmed, would be the first smoking-gun signature [of any particular property of an FRB source], which points towards very likely orbital motion,’ Bing Zhang at the University of Nevada, Las Vegas, told New Scientist.

It would mean two objects in orbit around one another would complete their journey every 16 days, with Earth receiving signals on the four days when the world is not blocked by its neighbour. 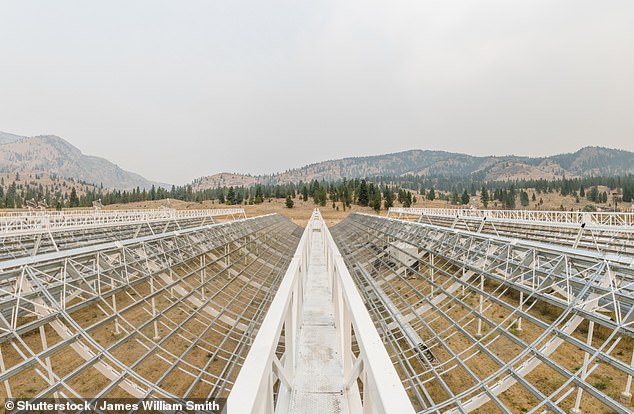 Astronomers have identified the first reliable fast radio burst coming from deep space using CHIME(pictured), but still don’t know what causes the phenomenon. This is the first time a pattern has been spotted by astronomers but the underlying reasons are unknown. However, scientists have ruled out alien communication

Scientists do not know if the repeating signal is an anomaly or the norm and have to contend with the possibility they have been looking for radio bursts in the wrong way for several years.

Since the first discovery in 2014, models have been looking for randomness specifically.

However, this revelation will allow them to narrow down the scope of their search.

Leon Oostrum at the Netherlands Institute for Radio Astronomy told New Scientist that despite the fact they do not know what causes the signals, they think they can safely say they do know what did not cause it.

‘If it were an alien beacon I would think it would emit more quickly, because a 16-day period is not efficient for communication,’ Dr Oostrum says.

‘Imagine getting one signal every 16 days – it would take forever to get a message.’

WHAT ARE FAST RADIO BURSTS AND WHY DO WE STUDY THEM?

Fast radio bursts, or FRBs, are radio emissions that appear temporarily and randomly, making them not only hard to find, but also hard to study.

The mystery stems from the fact it is not known what could produce such a short and sharp burst.

This has led some to speculate they could be anything from stars colliding to artificially created messages.

Scientists searching for fast radio bursts (FRBs) that some believe may be signals sent from aliens may be happening every second. The blue points in this artist’s impression of the filamentary structure of galaxies are signals from FRBs

The first FRB was spotted, or rather ‘heard’ by radio telescopes, back in 2001 but wasn’t discovered until 2007 when scientists were analysing archival data.

But it was so temporary and seemingly random that it took years for astronomers to agree it wasn’t a glitch in one of the telescope’s instruments.

Researchers from the Harvard-Smithsonian Center for Astrophysics point out that FRBs can be used to study the structure and evolution of the universe whether or not their origin is fully understood.

A large population of faraway FRBs could act as probes of material across gigantic distances.

This intervening material blurs the signal from the cosmic microwave background (CMB), the left over radiation from the Big Bang.

A careful study of this intervening material should give an improved understanding of basic cosmic constituents, such as the relative amounts of ordinary matter, dark matter and dark energy, which affect how rapidly the universe is expanding.

FRBs can also be used to trace what broke down the ‘fog’ of hydrogen atoms that pervaded the early universe into free electrons and protons, when temperatures cooled down after the Big Bang.

The Mandalorian finale: why the future of Star Wars should be a smaller one