After the New York dust-cart, the right royal show in the Saudi Kingdom

Slugged into career crisis in Madison Square, Anthony Joshua danced into the realm of two-time world heavyweight champion amid these desert ruins.


Joshua jabbed to distraction the Mexican who had ripped away his belts and his honour six months ago. 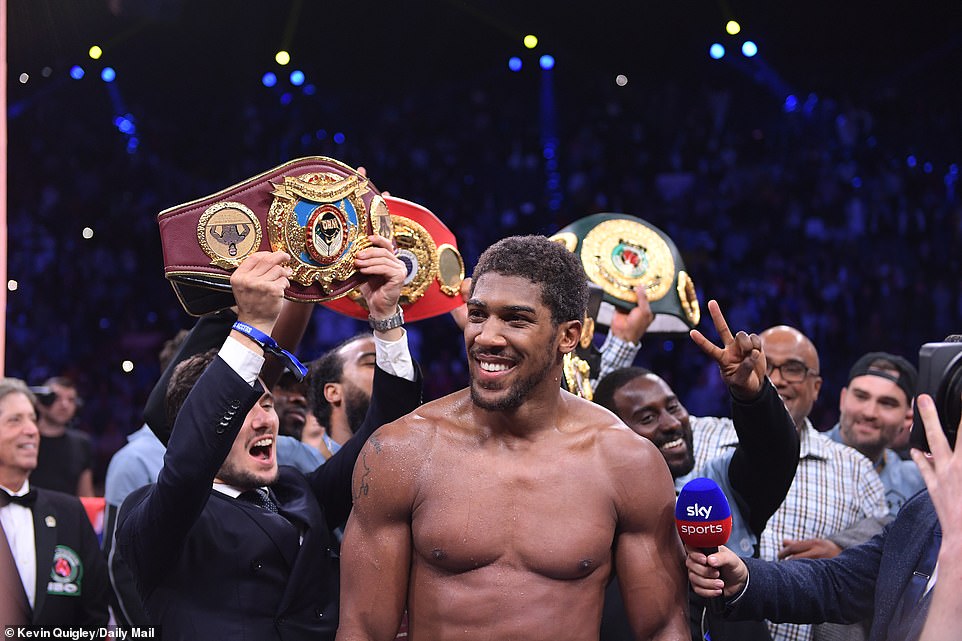 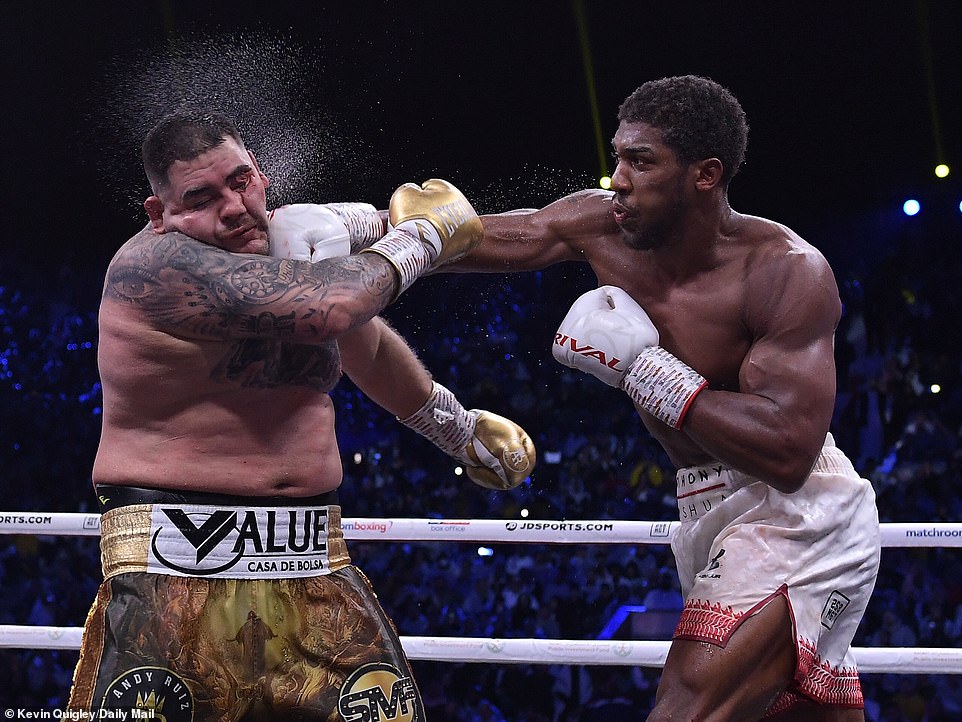 He toyed with Andy Ruiz Jnr, which made it hard to conceive how on earth he had brought so much pain and trouble upon himself in the first match against a shorter, more corpulent man.

The boxing world had worried about the historic risk of taking the immediate rematch but he made mockery of perceived wisdom by conducting a masterclass.

That required sticking to the jab, move and frustrate Ruiz plan which had to work given his dramatic weight loss.

Ten pounds lighter but light years wiser. As longer he resisted, for the most part, the street fighter’s temptation to be drawn into a brawl for bragging rights.

The statistics were stark. One judge had him winning 119-109. The two other officials had it 118-110, a cake-walk by ten rounds to two with which I concur.

Joshua credited this marvellous turnaround to this: ‘Being humble in defeat and now staying humble and hungry in victory.’

Ruiz brought up the prospect of a third fight which Joshua had raised earlier in fight week but now they have made a fortune here it is hard to see the public buying it again. So dominant was AJ in redemption.

His was a classic act but this was no thriller. Simply a well-judged restatement of his Olympic and world title credentials.

There are now bigger fish to fry than Snickers man. Not least the winner of another rematch, that between Tyson Fury and Deontay Wilder in February. 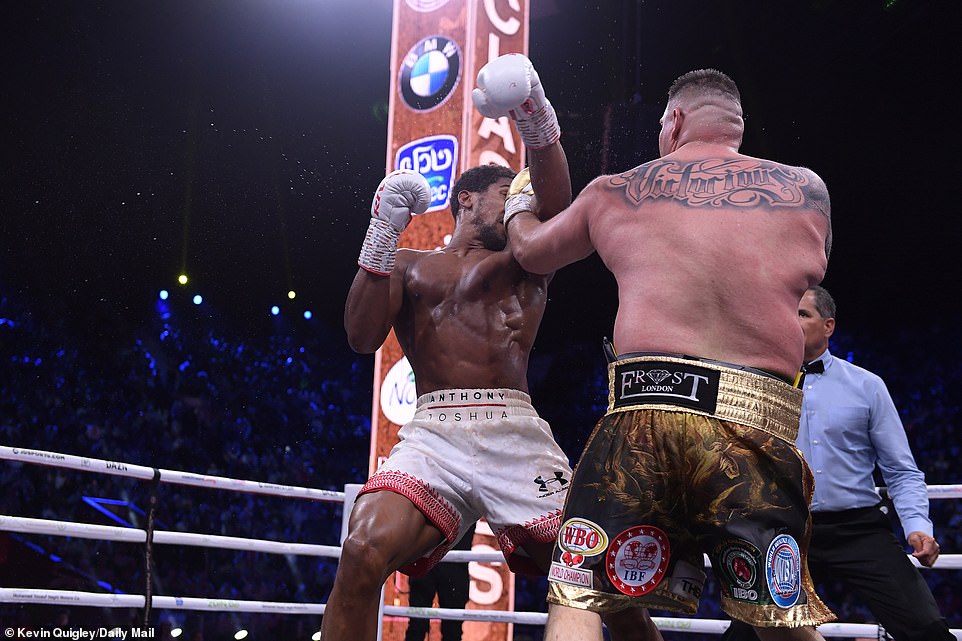 Normal service has been resumed in the heavyweight division.

Clash On The Dunes. They should have called it Desert Storm III.

After a week of sun-kissed days and moonlit nights, it rained on the evening parade of the Saudis from central Riyadh to the ancient ruined city of Diriyah.

It never rains but it pours in the desert. The first large splashes were the prelude to electric storms. As the clouds burst and the skies lit up was it a worrying omen for AJ?

Was lightning going to strike twice? Would Ruiz send another paralysing bolt through Joshua here in this rematch, as he had done to take over most of the world heavyweight titles in New York this summer?

The downpour came and went, came again and went again in the hours before the big fight itself. There was a canopy over the ring to protect the fighters from the worst of it but for most of those in attendance it was a case of reaching for the opaque plastic ponchos distributed in haste.

Shouldn’t we have gone to Cardiff, after all?

When you build a 16,000-seat arena in less than two months there is no time to put on a roof. Even if these oil-rich sponsors who had already invested upwards of $200 million dollars in this event had really wanted to spend yet more on a temporary structure which they will start demolishing not long after this one-ring circus leaves town.

The flower buds which sprout through the sands the instant they are wet, only to disappear just as suddenly when the sun rises, will have to be quick if they are to be gone before the stadium itself is distributed to all corners of Arabia.

Starting with the removal of the ring to a palace of one of the royal princes. A nice souvenir if you can get it. 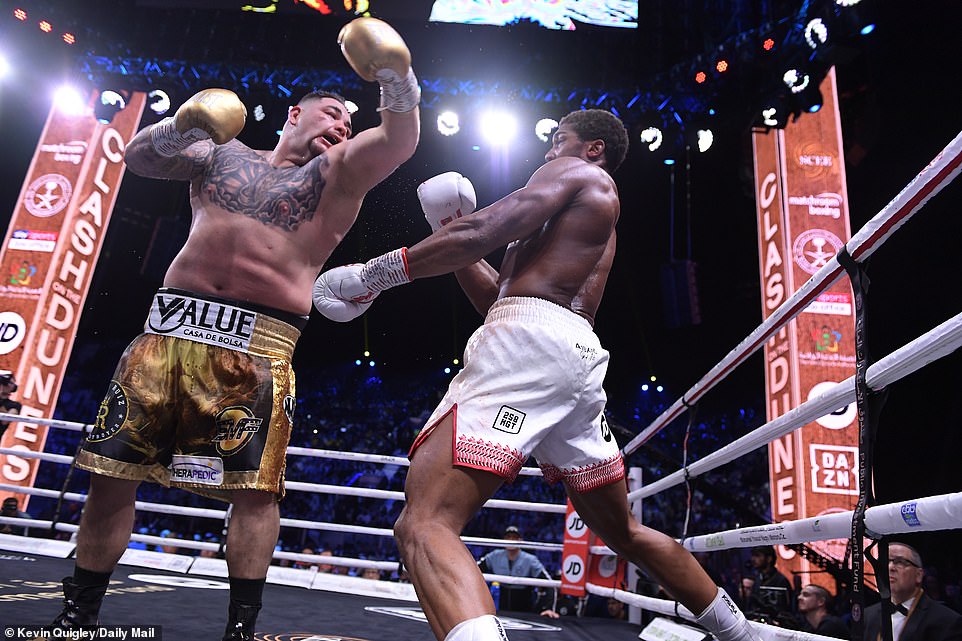 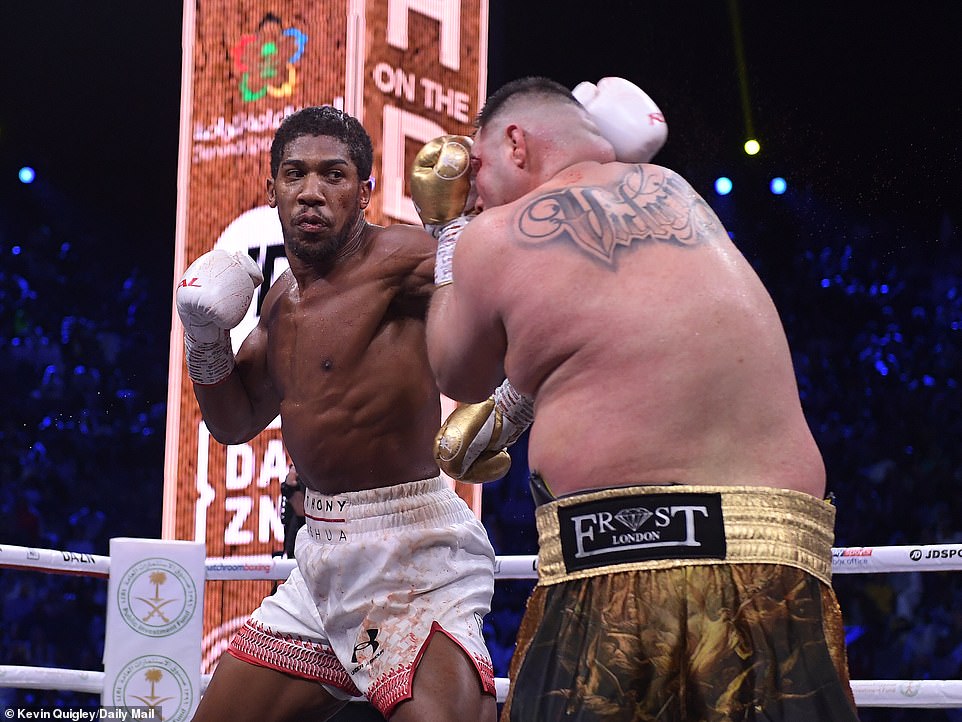 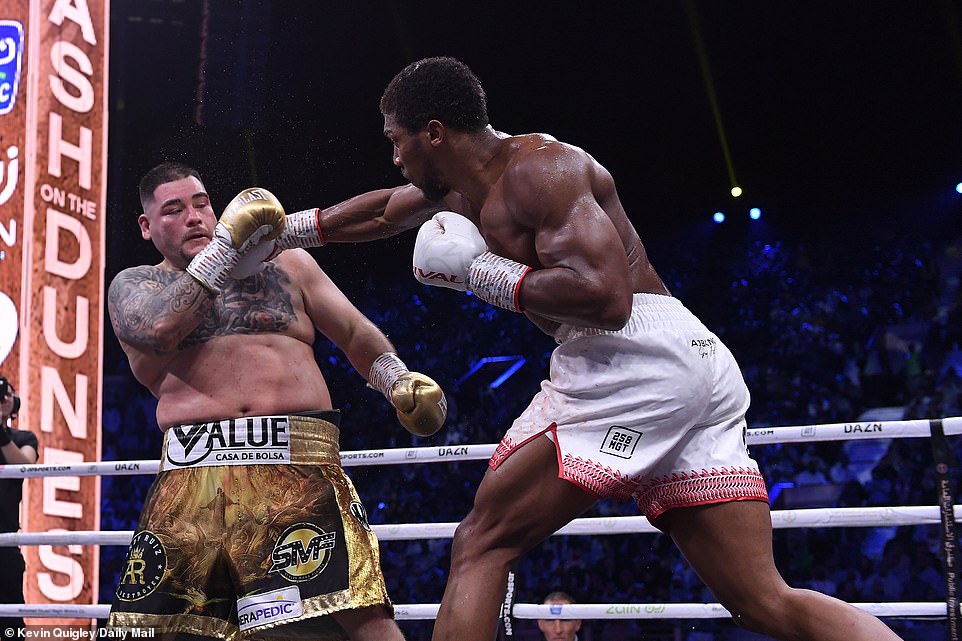 Joshua mixed it up nicely on the back foot early on, the jab a key weapon in controlling the distance between the rivals

Nice work, too, for Joshua and Ruiz at $85 million and $13 million respectively.

With an unusual show of patriotic loyalty the London bookmakers kept faith with Joshua as favourite even though the majority of substantial betting was on Ruiz. Both men looked tense when pictures beamed onto the giant screens from their dressing rooms as they were having their hands wrapped.

The loudest cheers so far from what appeared to be a full house greeted the arrival of some of the Middle East’s UFC favourites. Boxing is in its comparative infancy in Saudi Arabia and was much in need of Joshua and Ruiz to supply a thriller.

The smattering of British fans did their best to make themselves heard as Joshua came to the ring but this a mere whisper of the Wembley roar. The 02, even. The Saudis took sides and away we went.

After all the speculation about his weight, Ruiz looked only a little heavier than before. The leaner Joshua was moving better and was winning the first with his jab before he clinched the round with the first big right of the night.

Ruiz had been cut beside the left eye by that Joshua right and as the blood seeped the wound became a target for the left jab. But Ruiz finally uncorked a right of his own and now Joshua was cut also by the left eye. 9-10

Joshua moving so much better without the muscle bulk and boxing according to plan. Jab, move, another round in the bag.

Ruiz working to close distance and although he was caught by a hefty right and left from Joshua he finished on the two-fisted assault to win his first round on my card.

The jab-plan still working well for Joshua and that weapon opened the Ruiz cut again. 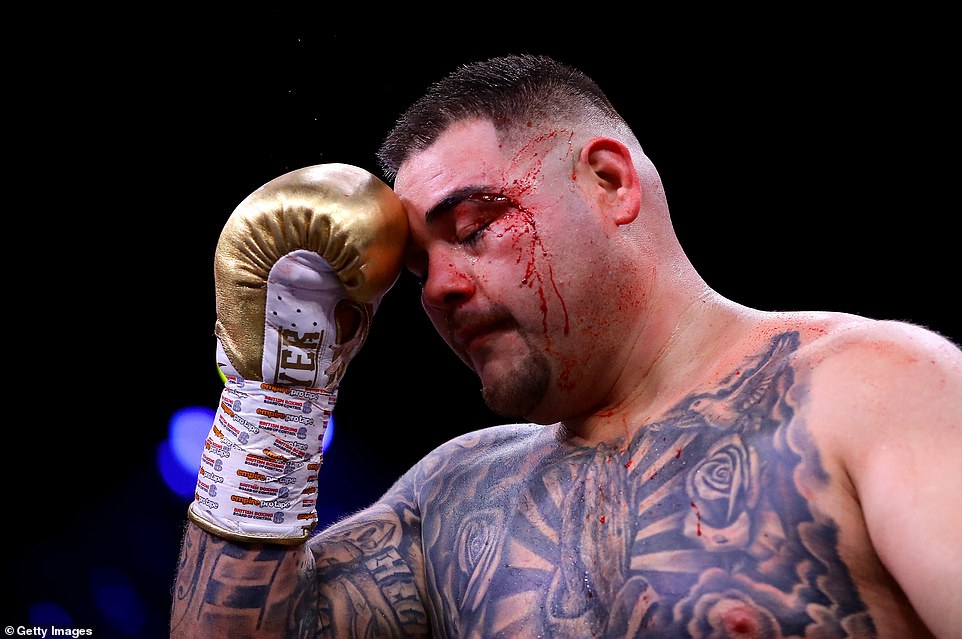 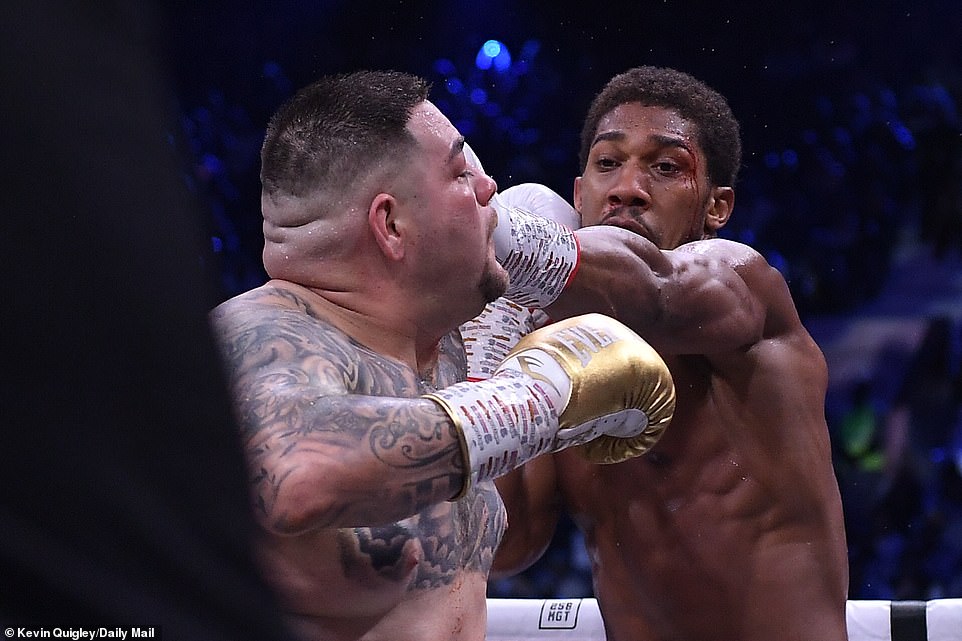 By the sixth, confidence was growing now in AJ, dancing a la Ali. Frustration for Ruiz and a long lead now for Joshua. Joshua opened up with a couple of big rights in the seventh and the chant of AJ, AJ, filled the desert night.

Hardly a thriller but if Joshua kept boxing like this he would win comfortably and without fuss or commotion unless he went knock-out hunting. Which he was suddenly tempted to do and punished for his trouble.

Ruiz rocked him twice to change the complexion of the fight slightly and trainer Rob McCracken screamed at him from the corner to get back to the basics.

Joshua followed orders and his corner breathed easier and even though he shipped one big right, he put the score decision beyond doubt. A knock-out all that’s left for the fading champion.

It was a procession in the tenth. He toyed with the Mexican who shocked the world just six months ago.

The it was same old, same old. Ruiz chasing, Joshua picking him off expertly and throwing in a bit of jab and hold to go with the jab and run to eke up the time in the 11th.

And so to what should be the lap of honour in the final round…..on his toes…a little flurry of excitement at the finale. Thank you Riyadh and goodnight. 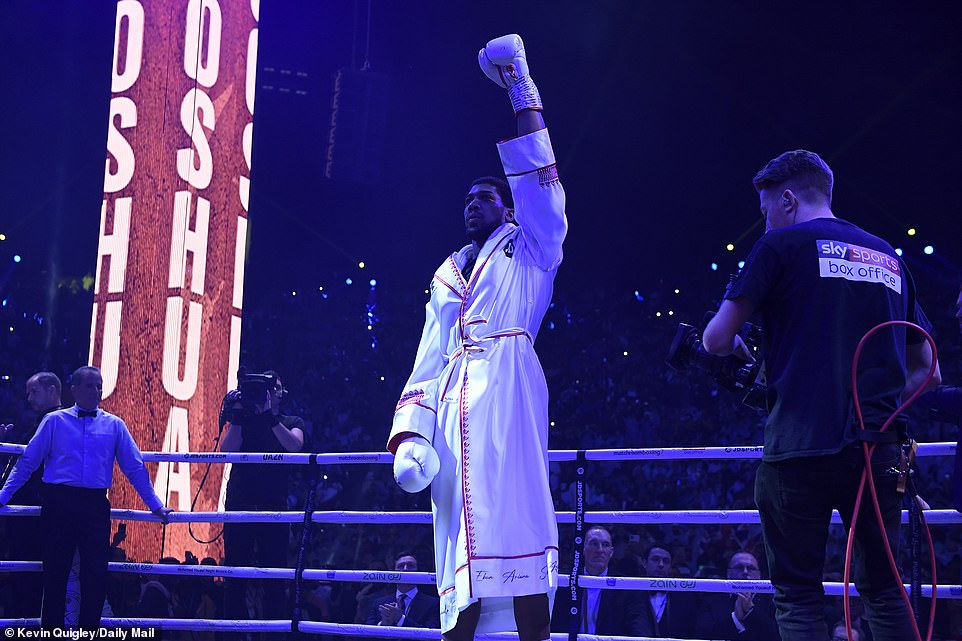 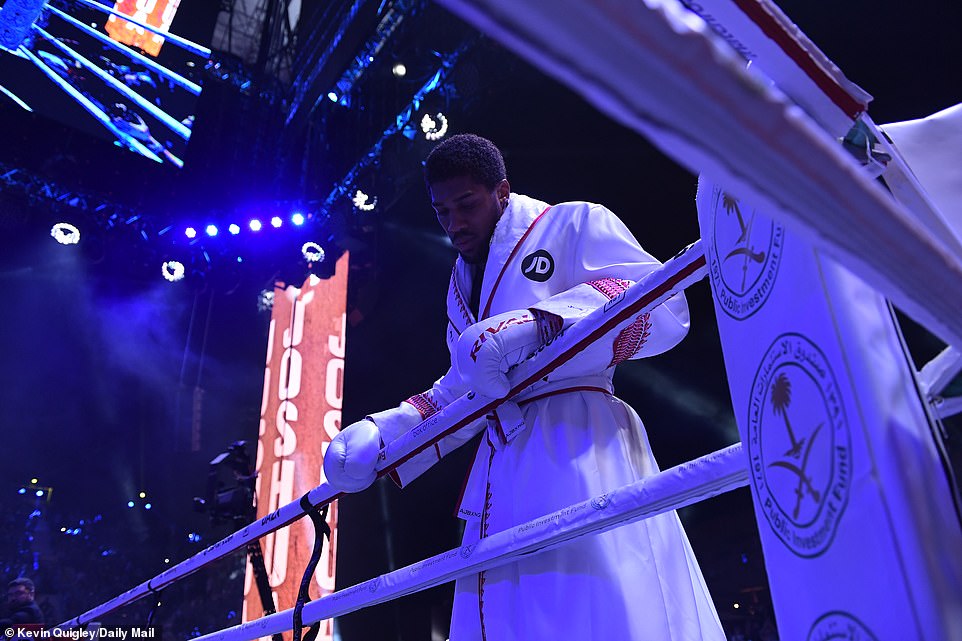 The challenger looked on edge as he entered the ring, well aware that this was the most important single fight of his career 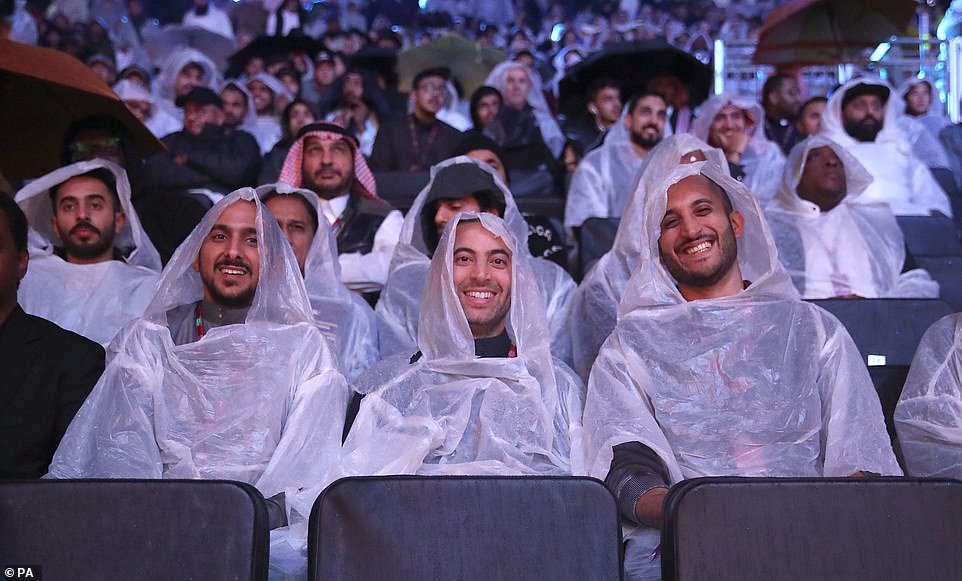 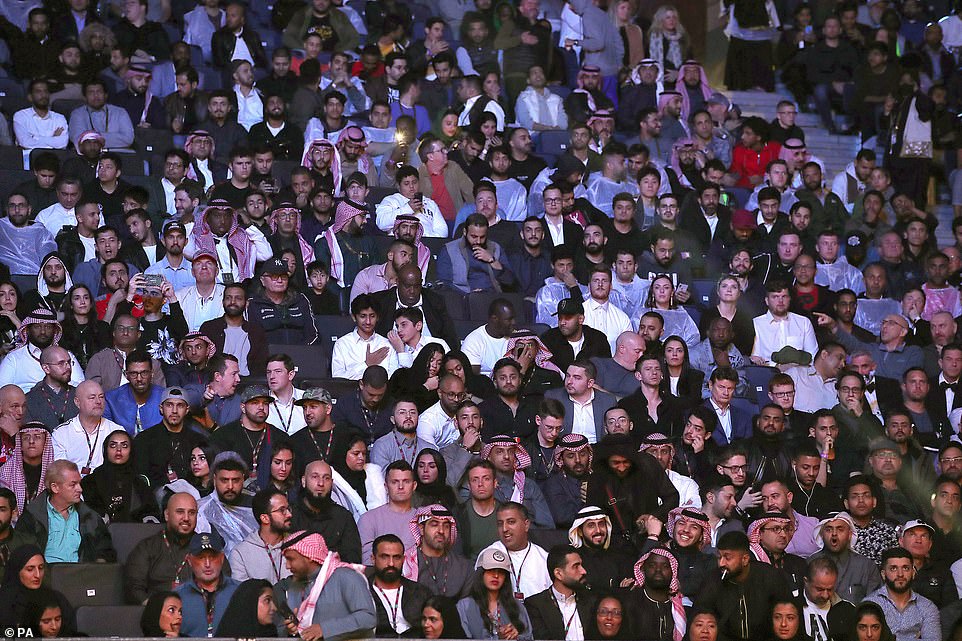 The eagerly-anticipated rematch toook place in Diriyah in a custom-built 15,000 seater stadium on Saturday night

How to protect your router from Russian hackers

Sergio Ramos invites David Beckham but NOT Cristiano Ronaldo to his...